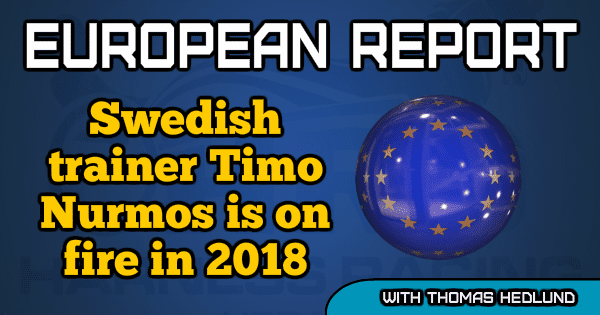 Swedish trainer Timo Nurmos is hotter than ever 2018. In January, the Finnish-born trainer won the Prix d’Amérique in Paris with Readly Express and, during the winter, his Zenit Brick has developed into a really tough contender among older trotters in Europe.

At Solvalla on Saturday (April 7), the 7-year-old son of Make It Happen took his third victory in 2018 and when he crossed the finish line in the Triton Sunds lopp ($95,100 Gold division), he also qualified himself for the final of Olympiatravet at Åby later this month.
Swedish top driver Örjan Kihlström is suffering with pain in his back and Kim Eriksson replaced Kihlström satisfactorily behind the favorite, Zenit Brick. But the horse’s performance was something special.

From post position one, Zenit Brick opened slowly and Eriksson had to be content with the fact that he placed the horse fifth over, while stable mate Sir Ratzeputz was sent to the front by Erik Adielsson.

Some 600 meters into the race, Zenit Brick got the order to move up towards the leader, but in front of him, Queer Fish and Kaj Widell wanted to make the trip even more difficult for Zenit Brick. Three wide almost the whole remaining race didn’t stop Nurmos’ horse. Zenit Brick easily disarmed Queer Fish in the home stretch and came home in 1:55 (mile rate) over 1.3 miles.

Conway Hall son Workout Wonder won Helsinki-Ajo at Vermo racetrack, Helsinki, Finland on Saturday afternoon. After a strong finish, he captured leader Midnight Hour for the victory in 1:55.3. He earned $15,900 and even more important, Workout Wonder now has a ticket for the prestigious Finlandia-Ajo, which is scheduled at Vermo on May 5.

Last year, Workout Wonder won the preparation race the week before the Elitloppet, but the entourage around the horse choose to decline the invitation for the Elitloppet.