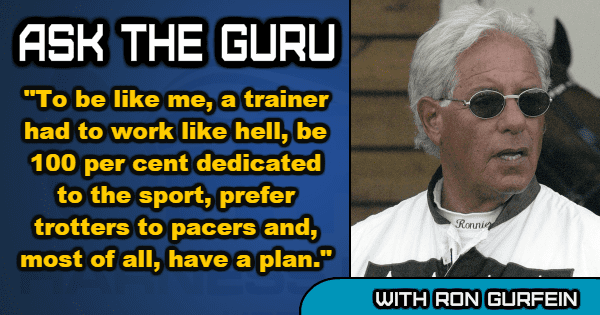 The young trainer that reminds me most of myself, assessing the track at Sunshine Meadows and the best advice I have received

Susan Fuller asks: What young horseman training now reminds you most of yourself and why?

The game has changed so much it is unfair to make most comparisons. Last year (2017), was my last year of training a public stable. I was at White Birch farm and raced mostly at Harrah’s Philadelphia. I can honestly say that the only trainers that did it my way were basically my age. Warming up twice, training multiple trips, showing up in the paddock to race and to qualify were a limited group — Eddie Lohmeyer, Chuck Sylvester, Bob Stewart, Jackie and Frank Ingrassia, and Kelvin Harrison were some of the very few that still paid attention to detail. Few, if any, of the young guns ever show up at the races and never at qualifiers. I remember one morning the track at Harrah’s was awful and management came down to discuss if we should race or not. Sonny the paddock judge asked me to get together with the trainers and decide what we want to do. I was hard pressed to find more than five or six in attendance with 80 horses in to qualify — most of them 2-year-olds.

I am not saying the young trainers are wrong, but that a little more effort will prove fruitful in the long run, and too many short cuts will prevent getting the most out of your horses.

To be like me, a trainer had to work like hell, be 100 per cent dedicated to the sport, prefer trotters to pacers and, most of all, have a plan.

Unfortunately, my choice for the young trainer that reminds me most of myself will be retiring this year at 35 as I did last year at 77. However, I am sure Frank M. Antonacci will see the fruits of his labor for the past dozen years pay off with his very capable assistant and now head trainer for Lindy Farms, Domenico Cecere.

Antonacci and my son Blake were born the same year and were good friends growing up so I know his history well. Antonacci is bright — actually, you could safely say intellectual and hopelessly inquisitive. When he first started training if we were in Lexington or the Meadowlands he was always in my office asking questions. It reminded me of how I probably annoyed Jimmy Cruise and Frank Popfinger to death. I was definitely not Antonacci’s only mentor; he had many. Howard Beissinger, Osvaldo Formia, and Ray Schnittker, to name a few.

What did he do with all that knowledge so young? First he came ridiculously close to winning the Hambletonian with Crazed at 23 years of age. I won my first Hambletonian at 54.

Last year, with a little less bad luck he could have reached the winner’s circle with International Moni.

Antonacci never pushes his colts and lets them come to their speed at there own pace and races his horses sparingly — very similar to my methods as a younger man, although I have been known to step on the gas a bit more in my latter years. He grew up in the computer generation that maximized the efficiency of the barn. My son forced me to do the same.

To me Frank M. Antonacci personifies that which I consider my greatest asset, we know what we don’t know.

It would be improper of me not to mention two other young stars in the making who although their plan or operation doesn’t resemble mine, they have had some amazing achievements I have taken note of. Andrew Harris a very hard working, intelligent young man got Hambletonian money two years ago with a Robert Key homebred Weightlifter K after drawing the 10 post in the final. He will have a fine year with Perfect Summer K, a filly I loved that was a little nuts when I trained her last year. If Andrew can get her to go without the hopples she could be a more than respectable sophomore.

Last but not least, I marvel at the training job David Menary did with He’s Watching a Brittany-bred midget that sold for $3,000 and got a 1:46.4 record and earned over a million dollars.

Bill Walton asks: With all the knocks on the training track at Sunshine Meadows what will its future hold?

I have heard this question for 20 years and I would say it’s doing better than ever.
Great trainers know how to adapt to all track conditions. The requirement on this track is simply go slower and use borium. I guarantee that there are far more soft tissue problems on the clay tracks in north Florida because they hold too much when they are right and slide too much when they are wet.

Despite the conditions, nine Hambletonian winners trained over Sunshine Meadows, plus other Triple Crown winners with the addition of the Alagna, Coleman-Herlihy, Zeron,and Wrenns powerhouse stables added to the mainstays of Lindy Farms, Swick, Johnson, Grant, Kelley and Huff. I expect a major rise in Crown numbers in the near future that came out of Sunshine Meadows.

I will suggest to those that will listen to the Guru it is not advisable to beat 2:12 with a 2-year-old trotter or 2:07 with a pacer on Sunshine Meadows track as it is now.

Molly Gardner asks: What is the best advice you ever got about training horses and who gave it to you?

Horse training is an art and to me great ability is a gift. However, to be successful you can’t stand on your laurels, you must have a little tact when approaching the sport. Perception is everything in harness racing as in all of life and here comes the quote you want: “Don’t ever drop a horse in the box that you think is not ready to perform well. All it can do is make you look bad.”

That was said to me about 27 years ago by Michel Lachance. Truer words were never spoken and I sincerely hope that young trainers looking to build their reputations will adhere to this idea. No one chases a loser. If you have a colt coming off being sick make sure he is fit before entering him back. If you aren’t sure, qualify him before entering again. Owners looking for trainers look at stats and by racing into form instead of training into form you will kill your stats. Don’t waste your time or your owners’ money putting a horse on a truck to race that you know is sore. Most of all, don’t try to hide lameness from the state vet. By getting by her you are severely jeopardizing the well being of your driver, the other drivers and the horses in the race.
Lauren Cardoso asks: I know you and Murray Brown are both college basketball nuts. This year’s edition of March Madness is nothing short of crazy. What is the eventual outcome?

I wish I had a crystal ball, but even then I may not be able to answer this puzzle. But, I will say it presents a scenario that two weeks ago I never dreamed could happen.

As is the normal trend with the selection committee, they buried Kentucky with a five seed in with Virginia the overall one seed. This was after Kentucky blew the doors off Tennessee to win the SEC conference championship. The egg looks nice on their faces now. The south bracket was blown apart with upsets. Virginia was the first one seed to go down to defeat to a 16 (UMBC) in the history of the tournament.

In summary, in the South the 1,2,3,4 are gone. In the West the 1 and 2 are gone. The East fared much better with Wichita State the 4 seed losing to Marshall 11 as the only major upset. In the Midwest section, the 1 and 2 remain, however the 3 and 4 are gone.

Kentucky’s Wildcats end up with the biggest breaks. I see them beating Kansas State and the joining the final four by eliminating Loyola of Chicago.

In the West I see Gonzaga beating Florida State and crushing a tired Texas A and M team that had too many hot suppers to advance to the Final Four.

The East to me is the most predictable. Villanova, actually a home team for me as I live about 2 miles from the campus, has been great all year. They will beat West Virginia and Texas Tech and be part of the big dance.

Finally, to stoke the Brown-Gurfein rivalry I will select Duke to mutilate a well-coached Syracuse team and squeak out a win over Kansas to complete my final four. On Friday, March 30, I will release my Final Four results.

Thanks to all my readers, your comments have been wonderful please keep the questions coming. A few non-horse related questions would be appreciated.

Next week I will answer Billy Cruz’s question: You have given us books you like. How about authors you most follow and your thoughts on their best books?

You are welcome to contact me directly at gurftrot@aol.com Have a wonderful week.