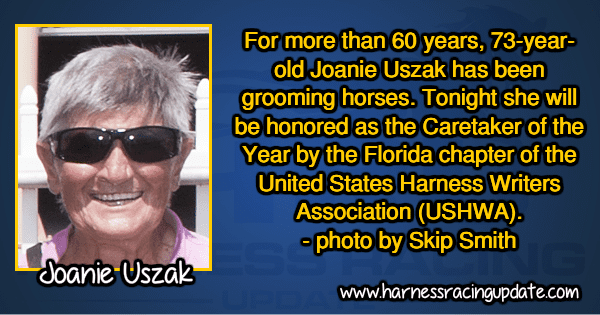 USTA CEO Mike Tanner says the industry needs to do a better job of looking after its retired racehorses, which led to the idea of the Standardbred Transition Alliance (STA).

Mike Tanner said the decision to try to establish a national aftercare program for retired standardbred racehorses really took hold at a meeting at Red Mile last fall when the story of the rescue of Killean Cut Kid (full story here) piqued the emotion of the people in the room.

“There were a lot of people in the room and there was a lot of emotion and a lot of passion,” said Tanner the CEO and executive vice-president of the United States Trotting Association (USTA). “I was sitting there taking notes and listening, jotting down ideas more from a business perspective – how can we make this work?

“I started thinking that I have access to some people who can help with this and I’d like to think that they are with the USTA to address situations and to try to find ways to make things better. So I’m looking around and seeing all these people with all this energy and it kind of hit me, ‘How do we use this energy? If this energy could be harnessed, if there was a plan to work on then we might have something here.’”

Thus, the Standardbred Transition Alliance (STA) concept was born. Though, Tanner stressed it is only an idea at the moment.

The idea — officially broached at the USTA’s annual meeting this last weekend in Columbus, OH and well received by directors — is for the industry and the USTA to provide seed money to establish an independent, non-profit group that would develop a set of minimum prerequisites and qualifications that a rescue organization would have to satisfy in order to qualify for funding.

Funding could potentially come from a number of sources, but one idea being floated is a mandatory donation of $1 per start. Also being considered is a $1 fee on all transactions processed by the USTA, a less-than-one-percent fee from consignors at horse sales and even the option for horseplayers to make electronic donations. Nothing has been decided regarding funding.

“In a perfect world, we would see the entire industry buy into it and support it. We would see the dollar-per-start idea that I put forward,” Tanner said.

He said looking after the horses on which the entire industry is built is simply the right thing to do.

“It’s a good business decision as well, and when those two things intersect it’s a good thing to be pursued,” Tanner said. “I originally came from the thoroughbred side of things, and it seems like they’ve been a step or two ahead of us on after care. I don’t want to call it a void, per se, but a way that the USTA could step in and make a difference. I’ve felt that way for a while now and it was just heightened with the Killean Cut Kid situation and the meeting I went to in Lexington.”

Tanner said it’s also important to get out in front of the issue before animal rights groups focus more attention on standardbred aftercare.

“In any business or any endeavor, if you don’t define who you are then you run the risk of having others do it for you,” Tanner said. “In this day and age, there is a different expectancy regarding after care and humane treatment, whereas that might not have been such a concentration in the 1970s or 1980s when I was just a kid and going to races with my day when I was too young to get in. It’s different now and that’s something that we need to recognize.”

The issue is also a personal one for Tanner.

“My wife has a pacer that she just retired and has been trained as a riding under saddle horse, and lives a couple of miles from the house. So we’re really lucky in that we’re in a position where we can support the horse, hopefully for the rest of his life. But not everybody can. There needs to be incentives and some sort of safety net for this issue,” Tanner said. “It’s unrealistic to say that we can care for every retired racehorse. I can’t make that promise and I don’t think anyone can, but we can do more collectively than we have been doing. There are a lot of people out there that feel that way and want to help and I’m looking forward to working with them.”

Tanner said USTA president Russell Williams has “assigned a three-person committee to help answer those questions of what we do next. It’s Don Marean, Jackie Ingrassia and Fred Nichols. What I plan on doing is meeting with them, as well as some of the established rescues. Standardbred Retirement Foundation is on that list. New Vocations is on that list,” Tanner said. “One of the concerns that has been brought to my attention is that if we go forward, will it hurt donations to the existing rescues. That’s a concern. I think we have a good idea here, but we need to consider all of the downstream effects and build something that will be an overall net good for the industry.”

Tanner promised to work hard to try to bring the STA to life, but he stressed it’s only “an idea with some possibilities,” at the moment.

“We’ll work internally on this, find a way to allocate more money towards after care and I think the big thing is just buy-in from all segments of the industry,” Tanner said. “The USTA can’t go it alone. It’s got to be something that every in the game, or at least all segments of it, support it. We need an alliance. It’s not a USTA program as much as it is a USTA idea to bring everyone to the table and we’ll all move in the same direction together.