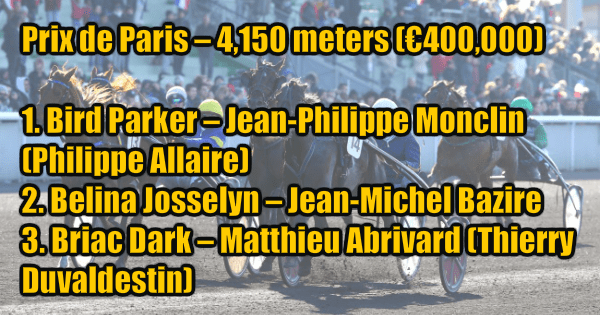 Bird Parker (Ready Cash) was one of the main characters when Prix d’Amérique was held in the end of January this year. After victories where the Philippe Allaire-trained 7-year-old beat Bold Eagle in two of the Prix d’Amérique prep races, Bird Parker was seen as one of the horses that really could win the biggest race in Paris during the winter.

In the Prix d’Amérique, Bird Parker didn’t have his best day, but when Prix de Paris was held in France last Sunday, he again showed his talents.

The Jean-Michel Bazire-trained mare Belina Josselyn (Love You) came into the 4-kilometer (2.5 miles) Prix de Paris off a victory in the Prix de France, two weeks prior.

Bird Parker trotted parked outside of leader Bilibili and in the last turn he had beaten the horse on the inside. Bird Parker then had to fight in the stretch to defend himself against Belina Josselyn and Briac Dark, who both finished strongly.

Bird Parker may be the strongest horse that has raced in the Group 1 races during the winter and it was only fair that he won one of the biggest races in Europe, at last.
Bird Parker won the race in a 1:59.3 mile rate to collect $221,000.

Results from the three biggest races in Paris during the meeting: