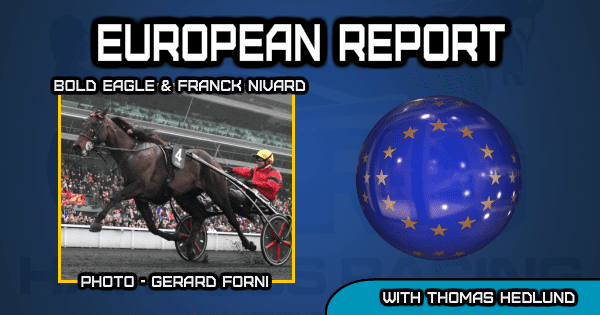 Two-time defending champ Bold Eagle will be challenged by the likes of Readly Express, Propulson, Bird Parker and more in one of the world’s greatest and toughest trotting tests.

Sunday marks the annual renewal of one toughest races in the world for the trotters when 18 horses will contest the Prix d’Amérique over 1.7 miles at Vincennes in Paris.

This year, the French home team, which is usually strong, features horses such as two-time champion Bold Eagle, Bird Parker and Belina Josselyn.

But there are strong challengers from outside of the country that will try to stop the French dominance in what is billed as the biggest race in the world for elite trotters.

Swedish-bred Readly Express has shown that he manages the conditions at Vincennes racetrack without problems. American-bred Propulsion, trained in Sweden, is considered by many harness racing fans to be one the toughest participants in 2018 Prix d’Amérique, while another U.S.-bred, Wild Honey, is a longshot in the race.

Norway’s Lionel and Italy’s Timone Ek, Oasis Bi, Tony Gio and Ringostarr Treb are all in Paris to try and record the upset. None of them are named as the probable winner, but when it comes to racing, you never know. In 2010, Oyonnax was one of the big sensations in the race and when he crossed the finish line as a winner, the odds showed 173-1.

This year, it seems like there are five horses that will draw a lot of attention from the bettors’ side.

Bold Eagle – The winner of two previous editions of the race and the king of harness racing in France. He enters the race without a victory since August of last year, when he won the Prix de Wallonie in
Belgium. Still, he’s the likely favorite to win Prix d’Amérique for the third year in a row.

Bird Parker – Has beaten Bold Eagle two times this winter and has lately developed speed that will be necessary in the race. Known for his enormous strength, he is in top shape. He is a horse that can do a lot of the job on his own.

Belina Josselyn – A mare that has everything and was runner up behind Bold Eagle last year. She has raced with one goal this winter and driver Jean-Michel Bazire is tough to beat in his castle. Belina Josselyn will most certainly finish among the top five.

Readly Express – The 6-year-old Swede that hardly knows how it feels to lose a race. Twenty victories in 24 attempts speaks for itself and this is one of the most interesting horses in the European circuit this year. Could be favorite in this race.

Propulsion – It’s the second attempt to win the Prix d’Amérique for Propulsion. Last year, the son of Muscle Hill finished fourth after a trip where he got no luck at all. The preparations have been better this year and he is one of the horses that will challenge for the victory.