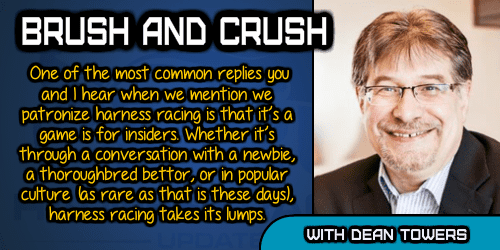 Is harness racing an insider’s game? The perception is reality

One of the most common replies you and I hear when we mention we patronize harness racing is that it’s a game is for insiders. Whether it’s through a conversation with a newbie, a thoroughbred bettor, or in popular culture (as rare as that is these days), harness racing takes its lumps. Everyone reading this likely agrees that, no, the game is not as insider as people may think it is. But, when we look at the complaints introspectively, we can’t deny that the game’s detractors make some strong points.

A couple of weeks ago I opened the program for the first 2018 card at Woodbine. Because of the holiday break I noticed a lot of stale dates, and anyone who handicaps or owns horses knows what a difference time off means for a standardbred. When you crunch the numbers (thanks Ray Schell), you find out that win percentages fall 25 per cent for a horse who is off more than 20 days, versus those who are off seven days or less. Return on investment falls appreciably as well for these horses, from about $0.74 to $0.60.

Despite almost the entire card with horses off more than two weeks, I decided I’d handicap the early Pick 5.

In one leg of the Pick 5, there was a horse coming from another track (who looked good enough, for a good trainer) off over a month. In the next leg, I saw a strong favorite; he too off extended time for another good trainer. I emailed a friend to see what he thought about these two horses and he wrote, “it sure looks like a good card for insiders to make money.

He was probably correct. The shipper horse off a month took money and won gate to wire. The horse off similar time in the next leg took boatloads too — bet down to a 2-1 chalk — but was 9th by 18 lengths at the half, missing the board. Someone knew what was going to happen with those two horses, but it certainly wasn’t an outsider.

This is especially difficult in a sport that increasingly relies on serial bets for its betting survival. If insiders are on a horse in leg three of a Pick 5 because they know he’s a good thing, they’re in the driver’s seat, because fans can’t even lean on an odds board for guidance.

A couple nights later, there was an even more striking example of this, again at Woodbine, in race 8; the second leg of the Pick 4.

A mare – Call it Courage – was coming off a 35-day break with no charted line. The last two times in this class she was 29-1 and 31-1, where she finished 9th and 7th respectively (from good posts). None of the lines on her card showed an on the board finish, and she was 3-for-35 last year. In one set of tools I look at to handicap, she was slated at 20-1 fair odds, and Compubet had her finishing 6th of 8. The only major change was the trainer, so that could certainly improve her chances some, as we all know.

The horse won and paid $4.70. “The state of modern harness racing,” was how one person described it on social media.

This race and others like them occur in harness racing with some regularity. They often make fans and bettors instantly think “they knew,” and if the insiders knew, their money is cannon fodder. Can you blame them for feeling the way they do?

What can be done? Well, something sure can, because this issue and those like it have been tackled in other jurisdictions already.

In Hong Kong, you can reference their website and pretty much learn what a horse had for breakfast that day. You learn why a rider made a move he or she did, what vet work was completed on a horse, and what the trainer intent is for today’s race. Even in North America, thoroughbreds off time have works, and there are plenty of widely available statistics regarding layoffs (short or long), or first time starters. For harness racing, as Brett Sturman noted here in HRU a few weeks ago, in New Zealand and Australia, steward’s reports include notes on driver and trainer intent. If a horse is off 40 days, you bet you’re going to have information about it. If a horse bleeds, or goes to the back at short odds, or races poorly for no apparent reason, it’s reported to customers.

In North American harness racing we often hear this is too difficult to address in a similar fashion; like somehow it’s easy to do in Hong Kong or Australia. We hear statements like, “no one in the grandstand is asking us to fix a problem like this”; tone deaf to the fact that the people who wanted you to address these concerns are no longer in the grandstand to complain about it anymore.

I suggest track executives open a program and put themselves in a patron’s shoes. Study the cards they are asking them to wager on and ask themselves if they feel a bettor’s money is being respected; if they feel they’re getting a fair shake. If not, think of ways to rectify this problem and put them into practice. If enough of them do it, for long enough, perhaps harness racing’s stigma of being a game for insiders will start to change.