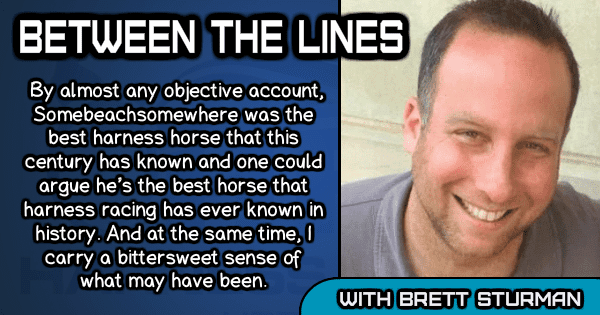 Somebeachsomewhere leaves with us wishing for more

The untimely passing of Somebeachsomewhere is a tough one to take. With an unbelievably brilliant – albeit brief – career on the racetrack and then as a stallion, I can’t help but feel cheated in a way that he didn’t get to see more of him in either of those capacities.

By almost any objective account, Somebeachsomewhere was the best harness horse that this century has known and one could argue he’s the best horse that harness racing has ever known in history. And at the same time, I carry a bittersweet sense of what may have been.

This column talks often about horses from a betting perspective, but Somebeachsomewhere transcended all of that. Although it was betting that first drew me to Somebeachsomewhere when I tabbed him in his Metro elimination in the third start of his career at odds of 5-1, he was already and easily far more than simply a winning wager. Like any other fan or participant in the sport, I’m attracted to witnessing greatness and there was no one greater.

A horse has never done more with less time than Somebeachsomewhere did.

In 2007, as a 2-year-old, he raced for what amounted to only a month and a half, and yet it was good enough to take home a share of the O’Brien Award for Canada’s Horse of the Year. In 2008, he made just 15 starts and yet between those two seasons he was able to stamp himself into both the Canadian Horse Racing and U.S. Harness Racing Halls of Fame.

Just like that, the racing career of the best horse that probably any person under the age of 35 had ever seen, was over. But the fact that he is seen today as one of the best ever despite a career that quickly came and went, speaks volumes as to how just impressive his accomplishments were.

Somebeachsomewhere was the rare harness horse that had a connection with everyday fans of the sport. There’s no better example than the 2008 Pepsi North America Cup in which a near capacity crowd at Mohawk erupted in cheers as Somebeachsomewhere led through the stretch en route to winning the richest race of his career.

It was something seldom still seen in thoroughbred racing (most recently with American Pharoah and before that with Zenyatta), but rarely seen anymore today in harness racing. He was one of the few horses that I truly enjoyed watching for his sheer talent, and horses since then that even came close to measuring up to the ability of Somebeachsomewhere have been few and far between.

Most people seem to consider the 2008 Meadowlands Pace to be the defining race of Somebeachsomewhere’s career, for the reason that in his lone career loss he raced his guts out under impossible conditions. But for me, I’ve always struggled in how I look back at this race.

It’s not to take anything away from the Pace winner Art Official, but Somebeachsomewhere deserved to win that race. For the unique horse that he was, he deserved to have an unbeaten career record. To this day, that race remains a tough one to explain. The image of Art Official coming back to Somebeachsomewhere nearing the wire is almost haunting in that you can’t believe it actually happened. It’s the same feeling I get torturing myself when watching replays of Birdstone run down Smarty Jones in the 2004 Belmont.

Although that race didn’t diminish his legacy – ironically it only enhanced it – it still would have been fitting and would have added to his place in history to have raced without ever losing; something that none of the greats including Bret Hanover and Niatross were ever able to do.

From that point onward, nearly every remaining race from Somebeachsomewhere was special. The ones that stand out most was the world record 1:49:2 at Flamboro in the second heat of the Confederation Cup, his win over Shadow Play in an absolute monsoon at Yonkers where he was first over and visibly not at his best, and his 1:48:3 win over Shadow Play in the Breeders Crown on a frigid night at the Meadowlands.

It happens with frequency where horses that are stars on the racetrack don’t pass that same level of talent to their offspring, but such wouldn’t be the case with Somebeachsomewhere. His record as the leading pacing stallion in the sport is well documented and speaks for itself. And the fact that he was a freakish horse on the track as well as a vitally important sire only underscores the uniquely special animal that he was.

The feeling of now missing out on future Somebeachsomewhere offspring is similar to the void from when he left the racetrack. It says a tremendous amount however about Somebeachsomewhere that in just two racing seasons and six foal crops of racing age that he’s had such a profound impact on the industry and people who follow the sport.

Somebeachsomewhere will continue to be celebrated for his accomplishments and contributions to racing. A horse of his caliber deserves no less. The fact that he was able to accomplish all that he did in such a short time speaks volumes.

Although it would have been nice if an outcome here or there throughout his career would have been different, any such difference would have only been a bonus for already getting to watch the best horse I’ve ever seen.