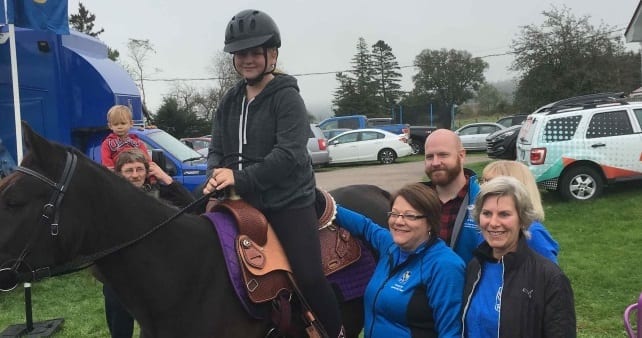 The Children’s Wish Foundation’s gift of a 13-year-old standardbred named Bo has been life changing for 12-year-old Jayden Trueman of Nova Scotia.

When Jayden Trueman of Nova Scotia was four years old, one of her knees swelled to three times its normal size even though she had not done anything to injure the area. Her life changed dramatically when she was diagnosed with a severe form of juvenile arthritis.

Eight years later, prescribed medications are working well for Jayden. And her spirits have never been better thanks to Bo, a 13-year-old standardbred that was recently presented to her by the Children’s Wish Foundation.

“What does Bo mean to Jayden?” her mother, Jackie Snow, asked rhetorically. “Oh, my goodness, the world.”

After Jayden conveyed her wish for a horse to the Foundation, her family undertook the expense of preparing for its arrival. Jayden had been taking riding lessons with Bo and caring for him at a nearby farm. But she understood that his owner, Kim Sellars, was equally attracted to his good-natured demeanor and did not want to part with him.

The more Sellars watched Jayden interact with Bo, however, the more she recognized the need to play her part in granting the child’s wish by selling the horse for a modest sum to the Foundation.

“As much as she didn’t want to give up Bo, she knew that connection was something you don’t see very often, that instant connection between a horse and a caregiver,” said Jacob Rafuse, a wish coordinator. “That’s when she knew that Bo was going where he needed to go.”

Jayden thought she was attending a surprise birthday party for one of her uncles the day Bo arrived. She was seated at a table when the brown gelding announced his presence by gently nudging her in the back. She turned and instantly understood that her wish was granted beyond her wildest dreams. Tears flowed.

Nothing seems to frighten or faze Bo. He is nothing but loving and trusting.

“He is as calm as can be. He’s very gentle,” Snow said. “I have a granddaughter. (Lilah) is almost 17 months old and she can walk that horse around. Jayden is holding on, too, but as soon as the baby stops, that horse stops.”

Jayden describes Bo as being “goofy,” a quality that delights her. “He can be calm and sweet,” she said, “and then he likes to play and stuff.”

Snow has observed a significant change in her daughter since the new addition to the family.

“She’s more upbeat,” the mother said. “She listens more, that’s for sure.”

Jayden understands the great responsibility she has undertaken and welcomes it. The horse, and not juvenile arthritis, occupies most of her thoughts now.

“She does everything every other kid does,” said Snow. “When she first started horseback riding (six years ago), it wasn’t fully under control and I was quite nervous because it can be rough on the joints.”

Doctors have told Snow that, for some children, symptoms associated with juvenile arthritis ease or disappear as they age. There is no telling what the future holds for Jayden. The only certainty is that her life is immeasurably better with Bo in it, thanks to one of more than 25,000 wishes granted since the Children’s Wish Foundation began 33 years ago.

For children whose illness often does not allow them to be playful and carefree, the Foundation grants an average of three wishes per day.

“It’s an incredible moment when you see that joy in a child’s eyes,” Rafuse said.