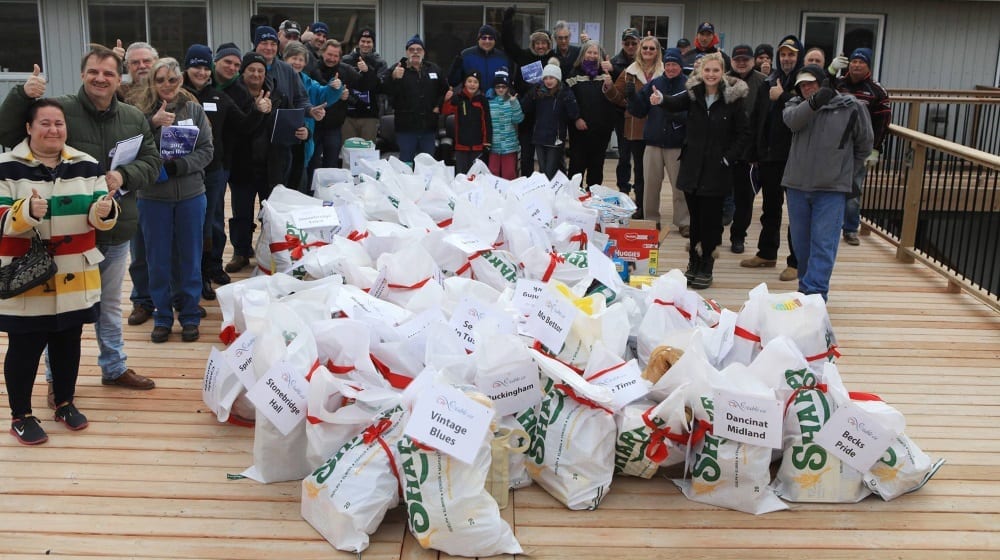 TheStable.ca’s second annual Christmas Open House drew a crowd of some 300 horse racing fans to watch the babies train, all while collecting 6,000 pounds of food and more than $2,000 for the Guelph Food Bank.

Not only did they come in droves to see The Stable’s 56 newly-bought yearlings jog in 10 sets, they also participated generously in the food drive organized for the nearby Guelph Food Bank and the consensus was that a great time was had by all.

The Stable is a fractional ownership group that was the brainchild of local horseman Anthony MacDonald and his wife Amy which allows clients to purchase as little as one per cent of a racehorse. After a decent year on the track last year – highlighted by the exploits of stakes winners Lawmaker, Zeppelin Bi and Cruising In Style – The Stable has really taken off and the MacDonalds now boast having 110 horses and close to 300 clients from 11 countries.

But can it get too big, too fast? McDonald confidently says no. “In terms of the scale of The Stable, there are 300 stalls here and we have 106 of them. The scalability of The Stable is never going to be a problem. We’re going to build something massive right here in Ontario for horse racing and it’s going to be something to see over the next decade.

Prominent local owner Adriano Sorella – who provided free hot dogs and fries for the event by hiring Phil and Linda Coleman’s food truck – said he got involved by purchasing a 28 per cent share of the Sweet Lou yearling Springbridge Proud to show his support for fractional ownership.

“I started in the business in a fractional ownership group with the Standardbred Breeders of Ontario Association,” Sorella said. “For someone to buy one per cent or two per cent of a horse, there is minimal cost and training fees involved and the excitement is there. Fewer and fewer people are investing hundreds of thousands of dollars, so this is something we definitely need. I was quite surprised when I turned into the parking lot this morning and saw all the cars. I was like. ‘Wow; there’s a ton of people here!’”

Marc and Michelle Treffi, who own pieces of nine horses in The Stable, traveled six-and-a-half hours from Glens Falls, NY to attend the Open House. “We love coming up here,” Marc Treffi, 42, said. “It gives us the chance to get away and to see how our yearlings are progressing.

“The experience is great. Last year, we had a decent year; we had a good trotter (Cruising In Style) in New York. He made some money and won some races. Winning a sires stake race, let alone winning two, which we did last year, was the thrill of a lifetime, probably better than my wedding day.

“Anthony promotes the value for the entertainment dollar and you can’t beat it. You spend a few hundred dollars and you and your family can come to the barn as much as you want. Whereas if you spend the money on a vacation, you go away for two or three days and that’s it.”

Attendees were encouraged to bring non-perishable food items for the nearby Guelph Food Bank and organizer Kelly Spencer – Grand River Raceway’s marketing manager – came up with a novel idea to get people to contribute. With help from Sharp’s Feed, who donated 110 feed bags – one for each horse in The Stable – owners were encouraged to put non-perishable food items in the bag labelled with their horse’s name. As a part-owner in five of The Stable’s horses, that meant a full cart for me at the grocery store.

“We were actually going to initially create a sculpture of a horse out of canned art, and that’s how it began. I thought about the logistics of it and how that was going to be a nightmare, and decided to go with this nightmare instead.”
Spencer’s idea turned out to be anything but a nightmare as 6,000 pounds of food was collected and another $2,060 donated online.

Local veteran driver Phil Hudon, who drove a yearling in each set, said he was impressed at their progress this early. “I went with 10 of them and they all went along very well — especially for November,” he said. “Anthony has a lot of nice babies there and what he is doing is really impressive getting new people involved. If they stay healthy and sound, he will have a great summer and I wish him and The Stable all the best; it’s a great story what he is doing.”

MacDonald beamed when speaking of his new pupil’s performances on the Tomiko training track. “To see horses that have had harnesses on for eight days going in sets of five, six and seven behaving themselves and understanding what their job is, that’s really special and that isn’t by luck. It’s a testament to the hard work that we put into these horses and the professional way that we approach The Stable,” he said. “I know what’s at stake here and I take my job very, very seriously.”