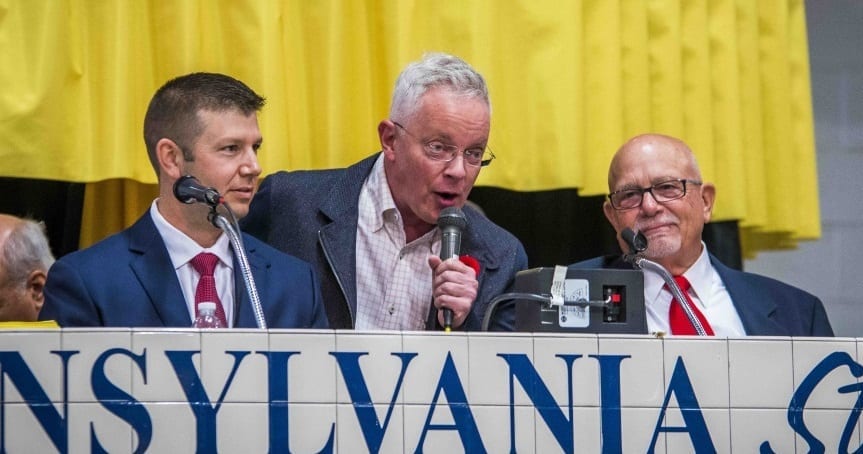 After more than 25 years as the head auctioneer at the Standardbred Horse Sales Company’s yearling and mixed sale in Harrisburg, PA, Martin is retiring.

After more than 50 years working as an auctioneer at the Standardbred Horse Sales Company’s yearling and mixed sales in Harrisburg, PA, and at least a quarter century as the head auctioneer, Vernon Martin, 75, has done the equivalent of passing the torch by passing the red chair to Joseph Mast.

“A famous auctioneer passed the red chair onto Tom Caldwell long ago, who passed it on to Vernon Martin. It’s one of those pride things with the auctioneers, and now it’s been passed on to Joe Mast,” said Preferred Equine Marketing’s David Reid, who photographed the passing of the chair that not only marked Martin’s departure as head auctioneer, but also Martin’s retirement from the sale.

“This was Vernon’s last one for us,” said sale president and CEO Pete Spears. “I had said to Vernon some years ago that we really valued his leadership and expertise and the way he’s continued this tradition. I wanted him to decide when it was time to step down. I had no arbitrary year to make a change or anything like that and he said to me two years ago that this would be the year. We’re going to miss Vernon and we have appointed Joseph Mast as the head auctioneer for next year, going forward. Hopefully Vernon will be back to be part of this, but not on the auction stand next year.

“He has been connected with the sale, in one capacity or another, since the 1960s. Isn’t that something?”

A Vietnam veteran who served with the Marine Corps, Martin, who lives in Lititz, PA, followed his father and grandfather into the auction business.

Spears said he and sale vice-president Russell Williams believe, “Vernon has few peers in being able to direct and control the flow of the auction from the stand, and to engage the buyers in a way that creates a sense of building excitement during the auction. I’m sure the younger auctioneers have probably learned a lot from him and will carry that forward.