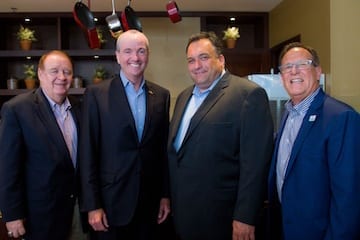 The CEO of Deo Volente Farms has close ties to governor-elect Phil Murphy and said Murphy’s election victory is great for the sport.

“It’s not a good thing, it’s a great thing,” Gulotta said of Murphy’s election. “Number one, he said that the industry’s future is ahead of it. The best days for racing in New Jersey are ahead of us, not behind us. Number two, he said that the industry was very important to him. Number three, he said the Meadowlands was a gem and he also wanted to make sure that thoroughbred racing was well-supported… He said all those things. He visited our farm and he came to the Meadowlands to present the trophy for the Meadowlands Pace. We haven’t had that type of representation for a very long time and I think that is a great show of support for harness racing and for racing in general.”

Gulotta has close ties to the governor-elect, something Mark Ford, the president of the Standardbred Breeders and Owners Association of New Jersey (SBOANJ), said Gulotta worked hard to achieve.

“We’re very fortunate that we have a relationship with the governor,” Ford said. “There’s a lot of us in the industry, headed by Mike Gulotta and Deo Volente, that really went far and above to establish that relationship. We’re very fortunate to have Mike on our team and fortunate he has a relationship with the governor. Maybe we’ve got a shot at relaying to the governor how important this industry is, how influential it is in New Jersey with all the open spaces, how many people are involved and what infrastructure there is in the racing industry in New Jersey. Hopefully, we’ve got a bit of an ‘in.’”

“No one knows better than I… that we’ve gone through eight years of, at best, a stagnant situation,” Gulotta said. “I’ve seen the breeding industry and the racing industry bear great burdens. I tend to be somewhat optimistic, but I’m a realist. I’m a businessman and I think that we are in the best position that we could possibly be in.”

Gulotta said Murphy is a sincere person from a modest background and is anything but a career politician.

“He was born middle class at best. He started working when he was 13 years old, washing dishes. He comes from a modest background. I can tell you from my own personal interaction with him, it’s been nothing but positive. I find him to be a humble and very sincere person, so when he says that he is going to do something I believe it,” Gulotta said.

“The huge difference is he’s not beholden to anybody… He’s never been a politician so it’s not like he’s got a balance sheet with a lot of personal liability.”

Ford said he was more optimistic that he was about racing’s political fortunes.

“I’m very optimistic. We’ve been downtrodden for the last three or four years and now we have the right guy in and hopefully we can go forward,” Ford said.