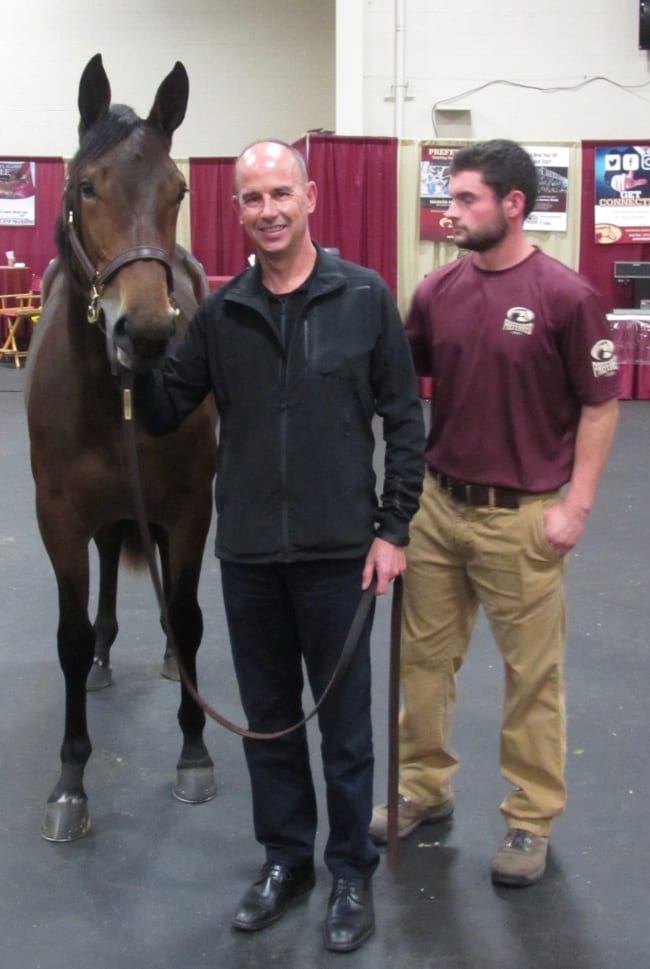 The owner sold a Muscle Hill colt for $320,000 and then bought a Muscle Hill filly for $320,000 during the opening session of the Standardbred Horse Sales Company’s yearling sale Monday that posted an average of $75,305, down 4.3 per cent from the strong 2016 opening day.

John Floren pulled off a unique double Monday at the opening session of the 79th Standardbred Horse Sales Company’s yearling sale at the Pennsylvania Farm Show Complex in Harrisburg, PA when he sold one yearling for $320,000 and bought another for the same price. The two Muscle Hill offspring ended up sharing the title as session toppers through the first of three yearling sessions that continue today and Wednesday.

Floren, who lives in Ontario and operates Coyote Wynd Stables, sold hip 112, a colt out of Sheer Glide named Sheer Muscle to Mario Mazza of New Hope, PA consigned by Peninsula Farms. Exactly 50 hip numbers later, Floren purchased hip 162, a filly named The Ice Dutchess out of The Ice Queen bred by David Reid and Stephen Dey III and sold out of the Preferred Equine consignment.

“How often does that happen? Just a little trade,” said Floren’s Ontario-based trainer Clark Beelby, who signed the ticket and did the talking for the veteran owner who does not court the spotlight.

“He has an appreciation for bloodstock,” Reid said of Floren. “He had a good day here selling one for a lot of money. He is a top-quality guy. I wish we could clone him for 10 more guys. He knows the big picture, he buys quality and he’s a first-class guy. It’s a perfect scenario all the way around.”

Standardbred Horse Sales Company president and CEO Pete Spears said he was pleased with the results, but was left with one serious mystery from the opening session.

“The trotters were very strong. If it weren’t for the pacing colts, I think we would have been far above last year’s average. I can’t explain it. There were certainly some really nice Hanover pacing colts that went for a whole lot less than we thought. So somebody got some good buys and we’ll sell the brothers and sisters next year.”

Reid said selling The Ice Dutchess for top dollar not only provided a nice boost of energy to his Preferred consignment just eight horses from the end of the session, the trotting mare is also a great story of one of racing’s important, but unheralded, operations.

Reid’s co-breeder on The Ice Dutchess, Dr. Stephen Dey III is the son of Dr. S.P. Dey, the founder of Heritage Hill Farm of Allentown, NJ.

“My late partner, Geoff Stein, bought the mare (The Ice Queen),” Reid said. “It was myself and Geoff, with Dr. S.P. Dey when she came off the track.

“We’ve been selling yearlings for the Deys for probably 30 years. They are a quality family and they do it the old-fashioned way. I’m actually very happy for them, more than myself, because they have been very resilient. Dr. Dey, the father, was very instrumental in the New Jersey Horse Park and agriculture in New Jersey. They go a little bit under the radar, but they have raised outstanding horses and get no credit for it. So, for them to sell one close to the sales-topper today, it’s hats off to them.

The Ice Dutchess is a full-sister to three-year-old filly Ice Attraction who has earned more than $490,000 lifetime under the tutelage and steering of Ake Svanstedt. Ice Attraction won the Kentucky Filly Futurity, was second in the Breeders Crown won by Ariana G and just won the $140,000 Crossroads on Saturday at Hoosier Park.

While Reid gave kudos to the Dey family for their patience and perseverance, Beelby was also thanking Floren for his loyalty, as well.

Both Beelby and Floren originally call western Canada home. Though the two did not have horses together out west, Beelby is a former top trainer in Alberta who moved east 21 years ago.

“(Floren) was racing in BC when I was out west. Coincidentally, he moved to Ontario the same month that I did,” Beelby said. “The trainer he had out there, he asked him who he recommended and my name came up and we’ve been together ever since.”

Reid said the theme of loyalty was “one of those things where you need everything to line up and today was the day that it lined up and I couldn’t be happier for all parties… including the purchaser John Floren.”

Beelby said Floren picked The Ice Dutchess out and the trainer “just gave him the thumbs up” after checking out the filly.

“I’m not sure who else was bidding on her, but there were bids coming from everywhere. I didn’t think she’d sell that strong, but I’ve always underestimated,” Beelby said, laughing.

“She has a great video, is a nice racehorse size and just overall a beautiful filly.”

Beelby said neither he nor Floren had any connection to The Ice Dutchess’ family in the past. The chief attraction was her sire, Muscle Hill, the trainer said.

The sire dominated day one in both gross (over $3.1 million) and average ($148,762) for 21 yearlings sold. Six of the seven highest-priced yearlings sold were sired by Muscle Hill.

“Certainly, anything by Muscle Hill was beyond imagination,” Spears said.

“I think the buyers are happy with the Captaintreacherouses, but they are looking for him to prove himself. They didn’t go off the wall,” Spears said.

Twenty horses apart, Fair Winds sold the third and fourth highest priced yearlings — the Muscle Hill colt out of Bluff named Summit In Sight to Story Inc. of Millstone Twp, NJ for $300,000 and the Muscle Hill filly out of Armbro Déjà Vu named Personal Paradise to Svanstedt for $265,000.

“I bought the mare in foal from Barry Goldstein. He sold the mare and I bought her for $120,000,” Mullen said. “She delivered this Muscle Hill colt and it was a good-looking horse. As time went, weeks and months before the sale, he was shaping up and looking better and better. He was just a little gawky yearling foal, but he matured into a very athletic individual. Everybody was pouring all over him.

“Everybody was looking at him like crazy and being complimentary of him, but you still don’t know how the numbers are going to go. I was thinking maybe $150,000 or something. They scrutinized the horse, they scrutinized the pedigree, they x-rayed him from stem to stern, but you don’t know at the end of the day how it’s going to unfold… I got my $120,000 back and I’m happy.”

Mullen was also hopeful for a good day during today’s session.

“I have a Chapter Seven (selling Tuesday) that people are pouring over because there are very few Chapter Sevens. It’s a colt, the fourth foal out of the mare, but everyone is interested in Chapter Seven and there’s not many in the sale. It’s out of Ken Warkentin mare, which is the same cross as Walner.

“Of course, I culled the mare after getting this yearling, so the mare is gone, but it guarantees that this one should sell well and perform well,” Mullen said, laughing. “That’s how it goes. The buyer gets the benefit of me having gotten rid of the mare.”

Spears predicted the final two yearling sessions would be strong.

“I think that compared to last year, we certainly cut a lot off the bottom end, so I think Tuesday and Wednesday will be stronger than last year and we’ll hope the sales prove that (Tuesday),” he said.
Today’s session starts at 10 a.m.