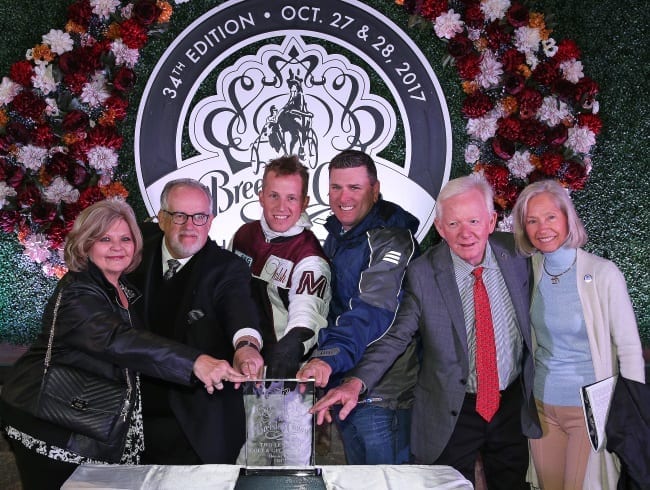 Stay Hungry provided a winning effort for Canadian connections in the two-year-old colt pace as Doug McNair picked up his first Breeders Crown with a winning drive Saturday for trainer Tony Alagna and co-owner Brad Grant of Milton, ON.

A five-time winner from seven starts heading into the $600,000 Breeders Crown, including the Champlain at Mohawk in September, Stay Hungry had faltered at key spots in his juvenile campaign after tying up in the Metro final and racing up on rivals at the Red Mile while enduring a troubled trip.

The Somebeachsomewhere—My Little Dragon (Dragon Again) bay bred by AV & Son Bloodstock LLC of New York, NY, redeemed himself for his subpar efforts in deeper waters when taking the Madison in pacesetting style on Oct. 14 at Hoosier Park ahead of the Breeders Crown.

Last week, the colt demonstrated the ability to come from off the pace when a narrow nose winner of his Crown elimination over Shnitzledosomethin.

That division proved to be the key race in the two-year-old pace as favoured elimination winner Lost in Time failed to fire and the familiar foes Stay Hungry and Shnitzledosomethin again paced to the wire with little to separate them.

Although a distant 9-2 second choice in the wagering, Stay Hungry had license to perform at the highest level as the third foal of three-time Breeders Crown winner My Little Dragon. My Little Dragon was a Crown champion at ages two, three and five and banked $2,386,055 while winning 24 of 55 starts.

But for two excusable efforts, the talented Stay Hungry has lived up to all expectations as a $150,000 purchase at the Lexington Selected Yearling Sale by Grant and co-owner Irwin Samelman of Las Vegas.

In the Metro final, Stay Hungry was leading throughout until faltering in the stretch run with a more than reasonable excuse.

“He was sensational in the elimination and we pulled his blood afterwards. On Monday, he was tied up and he was actually worse by the time we trained him on Wednesday. Going into the race we had his numbers under control, racing in the Metro Final, but, of course, he was pretty dull from all the treatments we had given him to help him out,” said Alagna.

The Red Mile miscue could have faltered any young horse but Alagna never lost faith in the talented colt.

“We took him down to Lexington and we skipped the first week. The second week, when we went to race him, he ran right up on the horse in front of him and made a break. They didn’t chart him a break because he run up on a horse,” said Alagna. “(After that) I said to Brad that he needs a race because he’s had no real work in almost three weeks, so we brought him over here for the Madison County and he was good, but I knew he needed the race.”

As always, there were decisions surrounding equipment as Alagna worked season long to figure out his young pupil.

“I made one adjustment to him, he’d never worn pop-out ear plugs in the Metro, but when he run up on that horse in Lexington I said I was going to put pop-outs on him,” said Alagna. “I trained him at home and took his plugs out and he was airborne. That’s how he was last week, and that’s the first time he wore pop-outs. Then, tonight, same thing.”

More than comfortable with the new arrangement, Stay Hungry persevered through a difficult trip.

“You don’t see too many horses going three wide in that turn, that early, and do what he did. I mean, that was a big effort. That’s a long stretch to be out halfway through the turn. He just showed what a quality horse he is,” said Alagna.

Grant, a Canadian trucking businessman, is also the former owner of the Milton Icehawks of the Ontario Junior Hockey League. He was thrilled with the effort of his young pacer over a fast Hoosier track that was much improved from the sloppy offering on Friday’s opening Breeders Crown card.

“Well, three-wide off the turn. I had all the faith in Doug and the job they did,” said Grant. “He’s a gamer, every week.”

“It’s an amazing feeling. It still feels like a dream. I thought about it all afternoon, what it would be like, and here we are. It’s just a big thrill,” said McNair. “You always dream of something like this and it’s just a lot of fun.”

Stay Hungry now boasts six wins from eight starts having banked some $459,310. He paid $11 to win as the second choice.