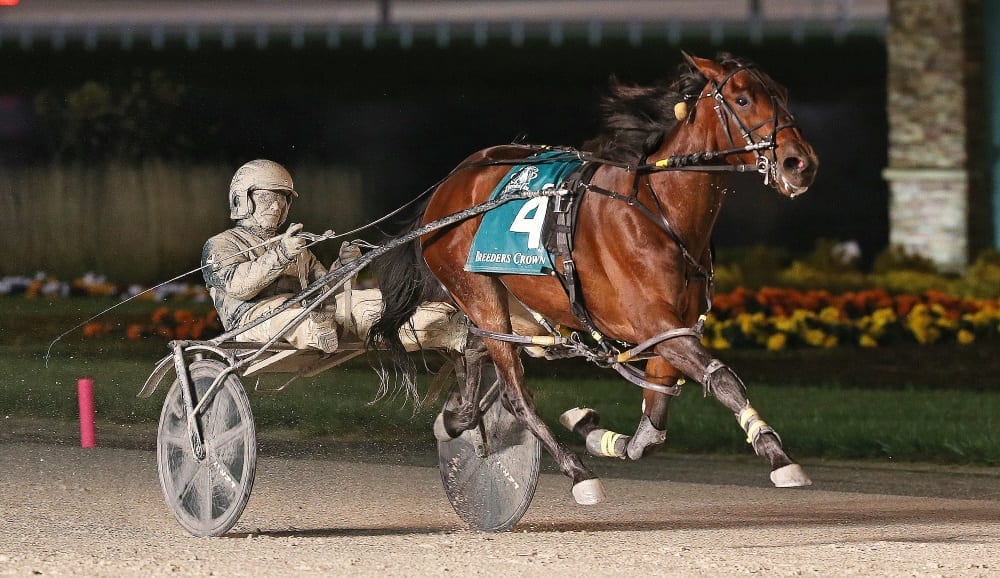 The betting public has been sweet on the daughter of American Ideal for much of her inaugural campaign going to post as the favourite six times and Youaremycandygirl didn’t disappoint as the pacesetting 2-5 mutuel favourite over a sloppy strip.

“She’s a world record holder and she showed them tonight that she’s for real,” said owner W.J. Donovan of his filly who in October sped to a division score in the International Stallion Stakes at Red Mile in a world-record timing of 1:50.

Not that the betting public has always been so keen to play the well-related filly. Following a trio of scores in New York Sires Stakes events to start her career, Youaremycandygirl shipped north to Mohawk and with catch driver Louis Philippe Roy in rein, scored a 40-1 upset in the Shes A Great Lady.

The winning result was admittedly bittersweet for Donovan who notes he was confident his filly would win that night despite the price.

“I absolutely did. I was on a cruise ship in the middle of the Atlantic Ocean with bad Internet connection and a bad cell phone,” Donovan said. “We were trying to watch the race and not being able to bet, and I never bet my own horses, but I tell you what I would have bet her that night. I thought she should be 6-1 or 8-1, I couldn’t believe it.”

Donovan, who has won a pair of Breeders Crown titles with the talented trotting mare Maven, is an executive in the transportation and logistics field. However, Donovan also proves to have some serious chops when it comes to picking a racehorse after signing the bill on Youaremycandygirl for $150,000 at the Harrisburg sale after careful consideration. The filly was bred by Birnam Wood Farms of Boca Raton, FL.

“I was looking for a New York bred filly and I loved her bloodlines. She was actually my top pick. I looked at three or four dozen fillies, looking specifically for a pacing filly,” said Donovan.

“Her page was loaded with performers I’ve admired, especially Sweet Lou,” said Donovan. “She also had a great video and when I saw her she lived up to expectations. She’s a gorgeous filly, good body and strong. We could see she would grow into a racehorse. She was destined for that.”

There was no doubt in Donovan’s mind that his quality purchase would be brought to the races by veteran conditioner Ron Burke.

“I have horses with various trainers but because Ron Burke had Sweet Lou and several other good performers from the family, it was a given she would go to him,” said Donovan. “He brought her along slowly and gave her time to mature on the New York circuit and away from the bearcats, if you will, when she won the Great Lady. I think that’s helped her at the end of the season here that she didn’t get beat up early as so often these young horses do.”

To win the Breeders Crown, Youaremycandygirl had to overcome difficult conditions but Donovan knew he had an ace up his sleeve.

“In these conditions, you never know, but it worked out. Yannick’s the man,” said Donovan. “I was happy to have him back driving her (after the Shes A Great Lady). I think he’s the best driver in the world right now.”

Gingras engineered a difficult elimination win last week and was understandably concerned with the conditions on Friday night.

“Last week she was a loose horse. I tried to get her in a hole and she wanted no part of that. It ended up a little bit different (tonight) and she was perfect and I could have done anything I wanted with her,” said Gingras. “When I did race her outside I thought I would race her from the back and she paced by horses really fast, so I knew obviously that the monkey was on my back and had the chance to go to the front, but I could do whichever I wanted.”

Working quickly through splits of :27.1, a :56.3 half and three-quarters in 1:25.2, Gingras knew the final turn would make the difference for Breeders Crown glory.

“I was a little worried because she was on a loose line and it could be either really good or really bad. But around the last turn I showed her the whip and she had the gear that I knew she had, so at that point I knew she was a winner,” said Gingras.

Donovan, who also sent out 30-1 shot Firestorm, couldn’t have been happier with the end result as Youaremycandygirl cruised home in 1:53.2.

“There’s not a trainer, driver or owner that wants to see a sloppy track like that, especially when they’re going miles like this,” said Donovan. “It was a concern, but she obviously handled it quite well. My other horse (Firestorm) came from an impossible position to get fourth. I’m thrilled with the result.”
Youaremycandygirl paid $2.80 to win.