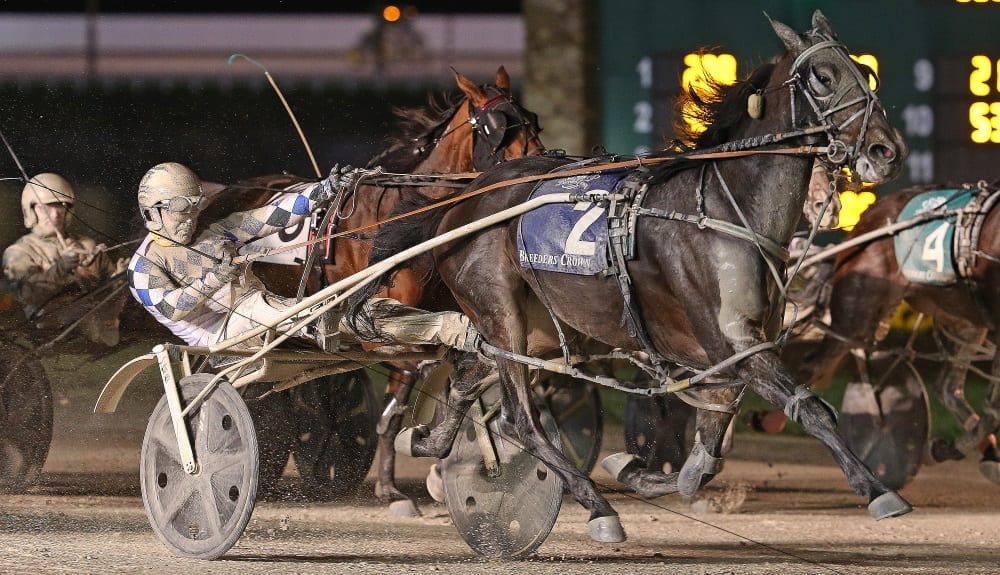 Pure Country has been a tough mare to figure in a year where she’s had more than her fair share of ups and downs, but she picked the right time to put it back all together.

In a wet and rainy night where favorites ruled on the opening night of the 2017 Breeders Crown at Hoosier Park, Pure Country (Somebeachsomewhere–Western Montana) came barreling through the stretch to win at odds of 14-1 in a time of 1:52:1 on the sloppy rated track.

At only three wins from 13 starts on the season heading into her Breeders Crown final, it was understandable to see how Pure Country had been overlooked while racing against the likes of Lady Shadow and Nike Franco N throughout much of the year. But on the other hand, this is the same mare that set a world record with a 1:48 qualifier over the summer and whose three wins included the Lady Liberty, the Artiscape, and an elimination of the Milton at Mohawk.

Winning trainer Jimmy Takter summed it up best following the race. “I never really knew where I had her all season,” Takter said, in terms of how tough it was to get a pulse on Pure Country. He said. “We were dealing with a lot of struggles with her this year. She got sick early and then she raced well. She’s a pure champion, obviously.”

For Takter, the nightcap win was his third Breeders Crown win of the night, winning also with horses guaranteed to win divisional honors, Manchego and Ariana G.

“She’s a homebred and I actually bred the mare myself and was there when she was foaled,” he said. And Bowden means it literally. “Like I said, I bred the filly myself. Literally, I had my hands up the mare. I put in the Somebeach semen; this hand right here did it all,” he said, laughing.

As Bowden mentioned, Pure Country was the winner of the 2015 Breeders Crown for 2-year-old fillies and she finished unbeaten that year with a perfect 10 for 10 record. From that freshman campaign through Friday’s Breeders Crown win, Pure Country has now banked over $2.1 million in career earnings. Bowden indicated following the race that his prized mare will target the TVG Mares as her next start and may race one or two more times this year before potentially breeding her next year.

In addition to breeding Pure Country, one of the special parts in this process was having Jimmy Takter train her. What better trainer to go manage a horse such as Pure Country that you never know what you’re going to get from one start to the next throughout this year. Said Bowden, “I trust Jimmy, that he’s going to have her ready in the big races. The eliminations don’t matter as much and Lexington was bad weather. You can write those off, but when the big money is on the line, Jimmy has his horses ready.”

This was Mark MacDonald’s third Breeders Crown win but his first outside of Canada. Despite faltering a bit with a first over trip, MacDonald didn’t lose confidence heading into the final. “I talked to my dad this afternoon and said I thought she could win if I could get her in the right spot; and she did win,” MacDonald said.

The race unfolded with Lady Shadow predictably blasting to the front, clearing past Nike Franco N through an opening quarter of :26:2. Lady Shadow proceeded to the half and then three quarters relatively unchallenged through fractions of :54:4 and 1:23:2. Around the final turn L A Delight came calling and a wall of mares began to stack wide to the outside.

Through the stretch, Darlinonthebeach made a late inside move after sitting third on the rail through much of the mile and looked to be coming through, but the outside horses were closing fastest of all. Lady Shadow continued to dig in and fight, but in the end it was Pure Country who cleared away to win by a length and a quarter over Bedroomconfessions who had been rallying alongside the race winner. Lady Shadow held on for third.

MacDonald bided his time throughout much of the mile with Pure Country but felt good about his chances turning for home. “I know Nike Franco N was in the two-hole and Lady Shadow is always tough to catch, but (Pure Country is) so game. She chases down horses and you know, I honestly thought she had a good chance to win it from that spot.”

The winning driver added that what he admires most about Pure Country is her grittiness. “She’s always going forward, even in Canada (in the Milton). I was going all I could the whole race in the Milton in like :53, 1:20; it was just like ‘Argh’ and she just got tired in the last 20 feet, but she’s just so tough. She takes one stride when other horses are taking two. She’s a big, rangy mare and she just keeps coming.”