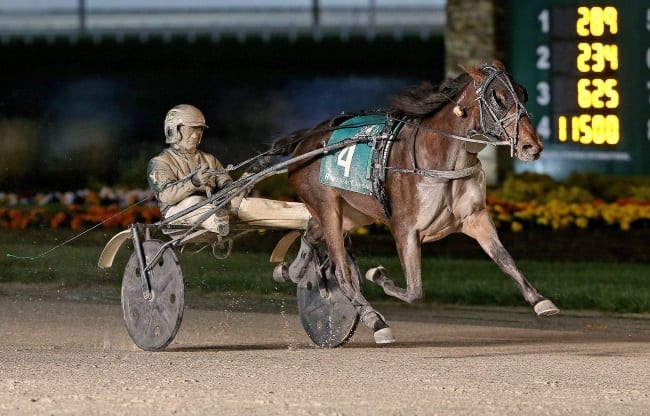 In early October, Hall of Fame trainer Jimmy Takter announced in HRU that he would walk away from the sport at the end of 2018 (full story here).

Interestingly, that time frame would coincide with the completion of Manchego’s sophomore season. Takter said he would be eagerly looking forward to Manchego’s future after she took the $600,000 Breeders Crown Final for two-year-filly trotters Friday at Hoosier Park to push her career mark to a perfect 12-for-12.

Phaetosive continued to pressure Manchego down the backstretch and passed the eventual winner just before the half-mile station in :55.4. Smedshammer backed down the fractions and jammed up the field as they passed the three-quarter pole in 1:26 2/5.

Gingras eased Manchego off the rail and sprinted right past Phaetosive in the stretch and cruised to a 4 1/4 length win over a fast closing Seviyorum (Andy Miller), who rallied from the outside post number 9. Phaetosive held on for third and Atlanta (Rick Zeron) rounded out the top four.

The winning time of 1:54.4 was over a sloppy track that was pelted with afternoon and early evening rain.

Manchego was bred by Brittany Farms, who inched closer to the ‘all-time breeders’ lead with 22 Breeders Crown trophies, one behind Hanover Shoe Farms.

Purchased as Whispering Hills at the Lexington Select Sale for $120,000, the renamed Manchego has now earned $873,948 on the season.

“The race kind of unfolded the way I thought. I figured Trond would leave with a trailer in there. Yannick did a great job. He kind of left, let him go, sat at his back. She was loaded as usual,” said Guariglia. “She just has an attitude that is unparalleled. She just wants to do it…she always brings it.”

With the victory, Gingras hoisted the Breeders Crown trophy for the 17th time (he added two more trophies later on the Friday card for 19 titles).

Takter has dominated the two-year-old filly trot division, taking four out of the last five events.

“It’s so nice to have a filly go undefeated. I haven’t done it since See You At Peelers (two-year-old pacing filly who went 13-for-13 in 2010),” said Takter. “These horses today are so fantastic. You teach them once and they remember.”

Where does Manchego rank among Takter’s record 33 career BC wins?

“That is one thing that I don’t want to do. I don’t want to rate horses. You know, It is not fair to the other champions we had, but you know she is unique. What she had done all year. Twelve straight wins is tough to do in today’s market,” said Takter. “I am so proud to be a part of her.”

Does Manchego know she’s a great one?

“She is really, really bitchy. She wants her way and is tough to work with,” Takter said. “She has stuck the groom three or four times. She can be a handful, even though she’s not very big. But she’s a pro on the track and has not made a mistake yet.”

With divisional honors guaranteed, Manchego will likely be considered for Horse of the Year with fellow Takter trainee, Ariana G, who overcame a tough trip to win her Crown division by open lengths.

“You know, (Manchego) is definitely two-year-old trotting filly of the year and I think she’s a big candidate,” said Takter. “It’s all coming down to Breeders Crown. She has as much reason to be there. She couldn’t have done any more than she has.”

Manchego will not get another chance to impress the voters this season as she will be shut down to prepare for her three-year-old season.

“That’s it,” Takter said. “We’re not going to race her anymore. I want to have a horse that can step into her three-year-old shoes and she’s not a very big filly. She’s a good keeper and she takes care of herself, so she could have raced another start, but why should we?”