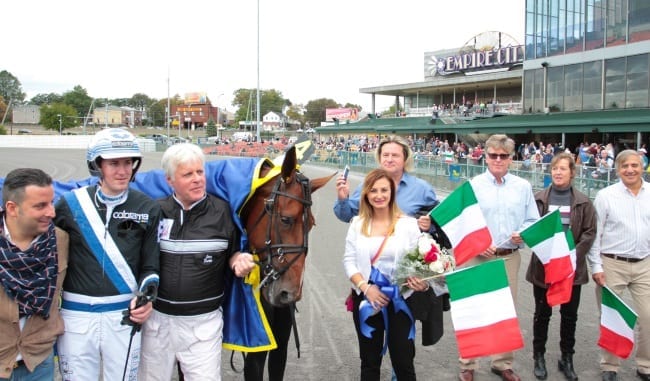 Twister Bi blows them away in Yonkers International Trot

The Italian trotter delivered an emphatic, impressive homecoming win in the $1 million event for U.S. trainer Jerry Riordan who has been campaigning a stable in Europe for 24 years.

Trainer Jerry Riordan, an expatriate from Rhode Island, has been involved in his share of major events as part of an odyssey that began in the United States, took him to Italy for 20 years and then to Sweden for the last four years. He never wanted to win a race more than he did Saturday’s $1 million Yonkers Invitational Trot.

Riordan wanted to win for himself and for the owners, Pasquale Ciccarelli and his girlfriend, Elena Villani. More than anything, though, he yearned for success on a grand stage for his 5-year-old horse, Twister Bi.

“I just wanted everyone here to see what this horse can do,” he said.

The trotting world saw what he can do, all right. And it was as special as it gets.

Twister Bi smashed the world record for a mile-and-a-quarter distance on a half-mile track, demolishing nine opponents in the sensational time of 2:22.1. Resolve had set the mark at 2:23.4 in last year’s International.

Twister Bi, racing in the International for the first time, patiently stalked Resolve through an opening quarter timed in :28.2 and an opening half that went in :57.4. Finally, with Twister Bi signaling he wanted to go, go, go, driver Christoffer Eriksson decided he could not, should not, restrain him any longer.

The well-bred son of Varenne—Lorraine Bi blew past Resolve as if he was standing still and began drawing away.

“It was reminiscent of Secretariat moving like a tremendous machine. It really was that kind of performance,” raved Peter Venaglia, a member of the broadcasting team at Yonkers Raceway.

Venaglia was not alone in lavishing high praise.

“He may be the greatest horse I’ve ever seen,” said Scott Zeron, who closed to be a distant second with Marion Marauder of Canada. Oasis Bi of Italy salvaged third for Stefan Pettersson.

“He is an unbeatable horse,” Pettersson said of the winner. “I told everyone this week that it was impossible to beat him. He is absolutely fantastic.”

Twister Bi emphatically delivered to Italy only its second International champion in the 39-year history of the race. Delfo, driven by famed Sergio Breghenti, was the first, in 1977. The race was held at old Roosevelt Raceway then and carried a purse of $200,000.

Riordan could only laugh at the notion that his name might be mentioned in the same breath as Breghenti’s. “Sergio Breghenti is an all-time legend in Italy,” he said. “They’re going to see Sergio Breghenti and see my name and say, ‘What the heck happened that day?’”

In a sense, what happened was very simple. Fans saw Riordan’s daily painstaking work rewarded in a manner bigger than anyone except perhaps his trainer could have envisioned.

“I just believe in this horse,” he said. “You live with the horse. You try to stay objective. But he’s done some things that were absolutely incredible.

“It’s very gradual progress he’s made, but he just matured. At this point, we’re just enjoying the experience of being around him. It’s not like we’re doing anything special with him. He just puts on an unbelievably great show.”

Twister Bi won for the 21st time in 50 career starts. He surpassed $1.2 million in earnings.

Riordan is confident the outcome will create a buzz in Italy.

“Absolutely, it will resonate,” he said. “Breeders still breed great horses over there. The father of modern breeding was an Italian. Even if the actual racing situation isn’t great, the breeding part of it, with the market we have in Europe, is great for breeders.” Riordan said economic considerations led him to leave Italy to train in Sweden, where harness racing remains immensely popular.

Ciccarelli, 33, and Villani, 31, a top amateur driver in Italy, could not wait to return home to celebrate with family and friends.

“It is my dream come true,” Ciccarelli said through an interpreter.

Like Riordan, he kept faith in the horse. “When he was younger, other horses were faster,” he said. “But the horse has been improving. He’s gotten better and better. Always better.”

Twister Bi’s time might have shocked handicappers. His triumph did not. He returned $2.90 for a $2 win wager.

Paula Wellwood, who trains 2016 trotting Triple Crown champion Marion Marauder with her husband, Mike Keeling, beamed with pride when it was over. “Words can’t even express,” she said. “He did so well against those tough overseas horses.”

Ake Svanstedt, who trains and drives Resolve, was perplexed after the defending champion was a shadow of himself and faded to sixth.

“He is training good and feeling good,” Savanstedt said. “But when it comes to a race, he is not himself.”

He plans to have Resolve undergo a thorough medical examination before deciding whether to go on to the Breeders Crown at Hoosier Park.

Ciccarelli and Villani, meanwhile, were already looking forward to having Twister Bi defend his International title next year.

“Why not?” Villani said.