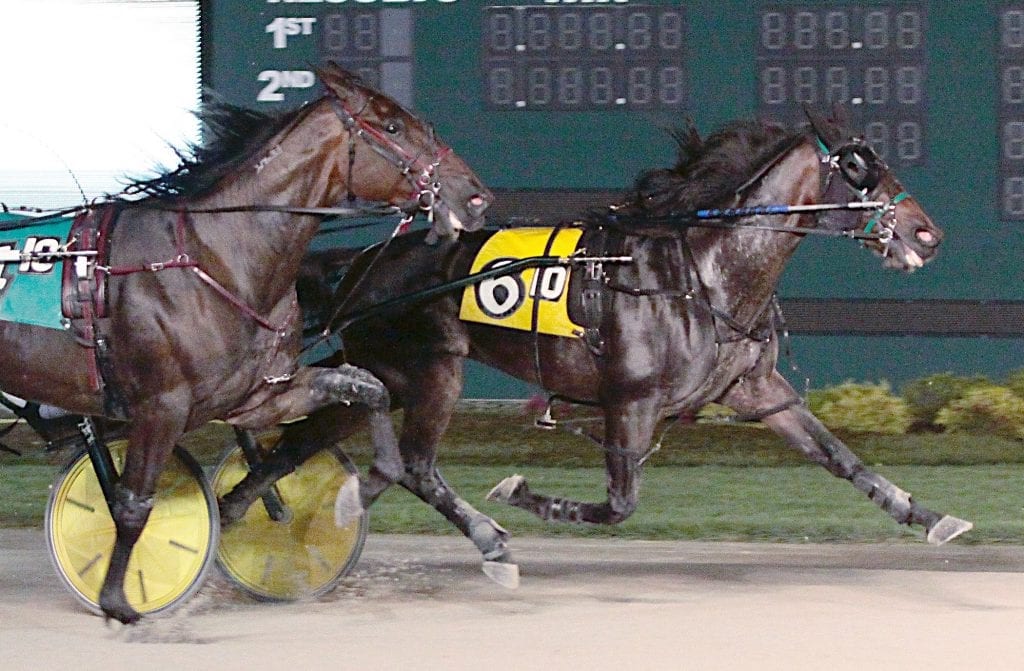 Indiana’s top trotters and pacers are set to slug it out tonight (Oct. 13) at Hoosier Park Racing & Casino. Divisional honors in the state will be on the line, and the trainer/owner partnership of Bill Crone and John Barnard enter the lucrative night with three shots at Super Finals glory. Crone will send out a trio of trotters on the championship card, including sophomores Swan Chase and Intothelight and freshman colt Fiftydallarbill. Two of the entries are morning line favorites.

The partnership between these two horsemen has previously produced results in Indiana. Crone first came to the Hoosier State in 2011 with older pacer St Elmo Hero. Incidentally, it was the first horse he had trained for Barnard, and it led to an association that continues today.

“A good friend of ours picked out St Elmo Hero,” Crone said of the now six-year partnership. “John and I just hit it off.”

That season, the trainer made two starts at Hoosier Park with St Elmo Hero, finishing second one week in an Indiana Sires Stakes elimination for older male pacers. The next week, the son of Western Hero—Crystal Crickett captured the $100,000 final as the favorite, pacing to a 1:50.1 victory. That season, the five-year-old went on to bank a little over $300,000 in his second season of racing and the two were off and running in the Indiana program.

In 2013 and 2014, Crone and Barnard returned to Indiana Sires Stakes with trotter Hudson Jesse. The Jailhouse Jesse filly won five of seven starts as a freshman, claiming a $40,000 Silver Final. In the Super Final, an interference break after the quarter cost her a chance to compete for victory. The filly returned at three, however, to win eight of 19 starts. Hudson Jesse’s biggest win came in the $216,000 Super Final, where Peter Wrenn steered her to a 1:56.3 triumph, hitting the wire nearly three lengths ahead of the field.

Three years removed from that big Indiana win, Crone and Barnard enter tonight’s huge card with legitimate chances to add to their collection of Indiana Sires Stakes scores. Three-year-old Swan Chase will start the evening, lining up in post eight in the night’s sixth race. The trotter enters the contest with 12 wins from 18 starts and $177,327 in seasonal earnings. Swan Chase finished second in last year’s Super Final racing as a colt. Earlier this season, he was gelded.

“He started out a little slow and we ended up castrating him. That made a big difference. I think he’s won seven of his last eight since we castrated him,” explained the Illinois-based trainer. “It just really turned him around. It was kind of a touchy thing to do, but he was getting sulky and just wasn’t racing well.”

Swan Chase sports a 1:53.2 mark over the Hoosier Park surface. Tabbed the 2-1 morning line favorite, John DeLong will drive the son of Swan For All—Precisionist. Crone is hoping for a good result, but admits there are three or four other good colts that could also reach the winner’s circle.

One race later, Crone will send out freshman trotter Fiftydallarbill in the $220,000 Super Final for two-year-old trotting colts. The 9-5 morning line selection has drawn post 10 and will line up in the second tier for driver Trace Tetrick. The Swan For All-CR Dixie Chick colt has won six of 14 starts, including a pair of ISS finals that secured entry into the Super Final. A $16,000 yearling purchase last fall, Fiftydallarbill has had his share of issues this season.

“When we first started out with him, he would halfway try to run and stop,” Crone said. “We changed some of his shoeing and it helped a little.”

Still, through his first eight starts, Fiftydallarbill only produced one win. It was during a start at the Indiana State Fair on Grand Circuit day that Tetrick made a suggestion. That day, the colt made a break and finished last in the Ralph Wilfong Memorial. In the post-race analysis, the driver offered his opinion.

“After the race Trace said, ‘You know, maybe if you widen him out just a little behind,’” Crone said. “We decided to put some brace bandages on him. Since we did that he’s been real good. He was just touching himself lightly. He was real green then, and when he touched himself he would go to running every once in a while.”

Fiftydallarbill has reeled off five wins in six starts since the adjustment. His lone blemish was a ninth-place finish in an Indiana Sires Stakes final held September 16. In that start, the colt made a break before the start. His last time out, the freshman romped by more than five lengths in the $80,000 ISS final, stopping the clock in a lifetime best 1:55.

Tonight, the colt looks to add to his $137,950 in seasonal earnings. Crone knows that it will be a tough feat to win one, let alone get to the winner’s circle with two horses on Super Night.

“It’s a good program,” said the trainer. “This competition is as tough as there is anywhere.”

And that is why the conditioner recognizes he has a longshot in sophomore filly Intothelight in the night’s 11th race. The Swan For All filly has won twice in 2017, and has drawn post two in the $220,000 Super Final. The division has been dominated this season by Satin Dancer, a winner in 11 of 15 starts. Slotted as 25-1 on the morning line, a victory over the favorite Friday would make for a big headline.

“She’s a nice three-year-old filly, but there’s three or four in there that are really good, especially one,” he said. “Hopefully she’ll get a check.”