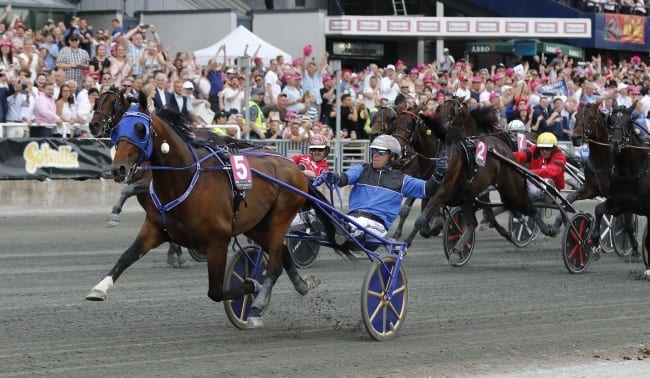 The Richard Westerlink trainee has some distance to go to live up to his heralded father Timoko, the richest French trotter of all time.

Handicappers preparing for the $1 million Yonkers International Trot on Saturday will note that Dreammoko is a 4-year-old son of Timoko, the hard-luck runner-up when the International was revived in 2015 after a 20-year hiatus. Beyond the name and the bloodlines, in many respects that is where the similarity ends.

Timoko was recently retired as a 15-time Group 1 winner. Dreammoko is still chasing his first Group 1 victory. Timoko was expected to be a force in the International for trainer Richard Westerlink and lived up to that billing. Dreammoko is rated 6-1 for Westerlink as part of a 10-horse field.

One in a million sounds about right. Timoko was still effective earlier this season as a 10-year-old before issues with his legs and joints led to this retirement as the richest trotter in France’s harness racing history with $5,949,190 in earnings. He won 36 of 101 starts with 15 second-place finishes. He was third on 13 other occasions.

Timoko remained an unyielding competitor to the end. He won his final start, in Cagnes-sur-Mer in August, in a time of 1:51.1 for driver Bjorn Goop.

Jerry Riordan, who trains Twister Bi, a top contender in Saturday’s International, grew to become a great admirer of Timoko through the years, even as he worked to defeat him.

“The horse was just unbelievable. He was one of those smart, old, indestructible horses,” Riordan said. “He was a horse with real character. You had to do what he wanted to do.”

Although few trotters will ever approach Timoko in their accomplishments and demeanor, Dreammoko has established unmistakable quality in capturing five of 29 lifetime starts to go with four runner-up finishes. He came in third another six times. His career earnings stand at $348,007.

Bred by Paul Vanklaveren in France, Dreammoko faltered last season before making dramatic progress this year. He won just once in 10 starts in 2016 and earned a relatively meager $22,804. This year? Thirteen starts have brought three victories, three second-place finishes and four thirds while he banked $293,802.

Gotta be the shoes, right? Wrong. The correct answer: no shoes.

Goop suggested to Westerlink that he try racing the chestnut horse barefoot. That resulted in a significant uptick in performance.

“This year we take the shoes off and he’s much better without shoes,” the trainer said. “He’s won a lot of money without shoes.”

Westerlink admits he is somewhat puzzled why the removal of shoes should make such a radical difference. “There are a lot of horses in France like that. It’s more natural, I think,” he said. “I can’t explain it. I don’t know.”

According to Westerlink, he decided Dreammoko was worthy of a place in the mile-and-a-quarter International only after he crossed the wire third in the Kymi Grand Prix at Kouvola on June 17. He was just two-and-a-half lengths behind his famed sire, who placed second.

“It was, for me, a stimulation to come over here,” Westerlink said.

Dreammoko drew favorably and will leave from post three. He will be driven by Gabriele Gelormini and is expected to trot around the half-mile oval barefoot. Westerlink can only hope for a better trip than the one Timoko endured when he lost considerable ground before a determined rally left him half a length behind Papagayo E of Norway two years ago.

“To me, Timoko was the emotional winner of the race,” Westerlink said.

He has relatively modest hopes for Dreammoko on Saturday. “He has a chance maybe not for win but for a place, I think,” he said.

He noted that Timoko passed on one trait he could do without.

“His father was a lazy horse in the morning. He’s a little bit more lazy than his father,” Westerlink said. “He cannot beat claimers in the work. In the race, he’s always fighting. I can’t explain it.”