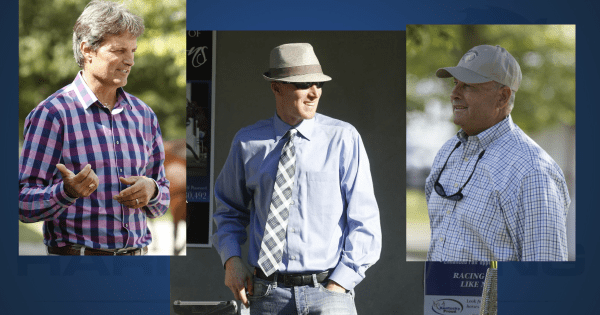 3 years leading to this moment

On the eve of the Lexington Selected Yearling Sale, several consignors talk about the three-year journey it took to get their yearlings from a planned mating to the sale.

“I’m not sure I get nervous, it’s more excited and anxious. I just want it to start. We’ve put the work in, the staff has put the work in and the horses are what they are, so now I just want everyone else to like them as much as I do… It’s three years from the time we decide on breeding, breed the mares, foal them out and prep them. It’s a long process.”

“We bought Mission Brief (as a broodmare) for $650,000. We don’t have visions of selling the first foal for $650,000 and that’s three years away. (My wife) Cindy said yesterday, ‘I was driving through the barns and they were all empty and it was so depressing’. I said, ‘What are you talking about? It’s a time to rejoice, we’ve done it. We’ve accomplished it.’ It’s probably like the mother saying, ‘Aw, my baby’s gone off to college,’, but it’s like ‘We win. It’s done. We finished our tour of duty.’ So that might be the difference between the maternal response and the paternal response.”

“We’re so excited. When you get lucky and the stars line up with an outstanding individual and the pedigree is there and conformation is there, it’s just fun. It’s a lot of fun. But we’re not there yet because the hammer has not fallen.”

“It depends on the horse. If you invest all that time and money and then the night before the sale the horse has got a leg that’s as big as a football, then it’s not as exciting as if they get to that day unblemished. If you get to that point (unblemished), then it’s the culmination of a lot of hard work and time and investment and you hope for the best.”