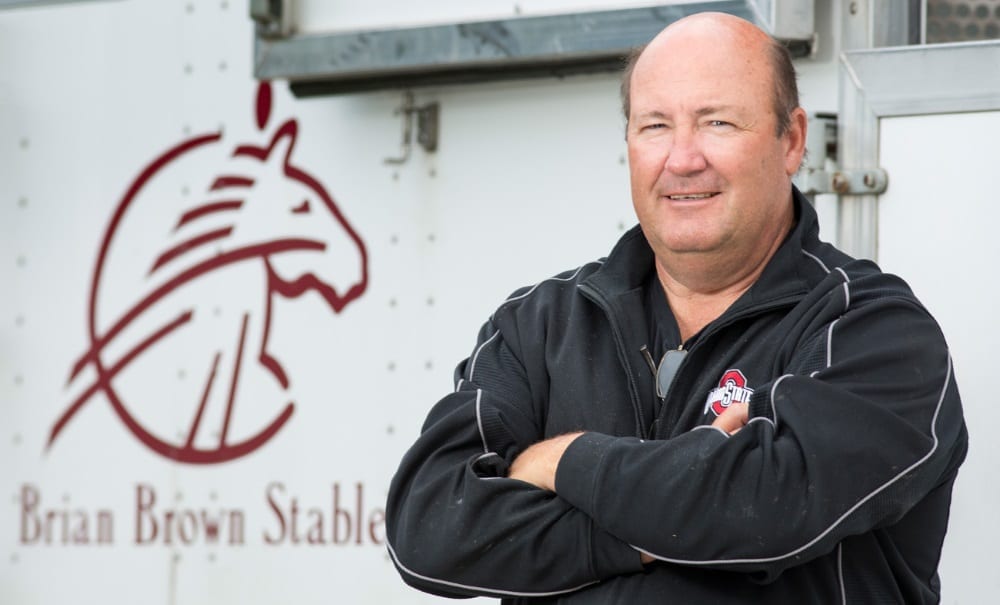 Brian Brown hoping to drink from the Little Brown Jug

The Delaware, Ohio-based trainer has the top two colts — Downbytheseaside and Fear The Dragon — and the home track advantage.

These are hectic times for Brian Brown. They are also great times.

But when HRU reached the lifelong Ohio trainer yesterday before the start of the Jugette Day program, he wasn’t sure of a few things.

Brown may not be certain how many horses he has in, but after talking with him, you get the idea he would not have things any other way. He’s the envy of every horsemen at the Delaware Fairgrounds, as in today’s $590,400, 72nd edition of the Little Brown Jug for 3-year-old colt and gelding pacers, he holds a pair of aces.

Brown’s power-packed pair includes Fear The Dragon (7-2 second choice on the morning-line, David Miller driving from post 3) and Downbytheseaside (2-1 favorite, Brian Sears, post 5), both of which have earned in excess of $1 million this season.

The duo, along with all of Brown’s other horses, call Delaware home, so it should make for a big home-track advantage, yes?

“To tell you the truth,” said Brown. “As good as Delaware’s track is, I don’t think I have any advantage. I don’t think a horse that comes here, even if they have trouble on a half-mile track, would have a problem. As good as these turns are, as good as the track is banked, it’s easier to get around. I don’t think it makes a big difference for me. I just don’t see it.

“When you are at this level, these are good horses, and if there’s any horse in this race who can’t get around a half, I doubt very much that they’d be here. If a horse had trouble at Yonkers, he could probably come here and get around this track and have no trouble. This track is so kind to horses. Good turns. Good footing. It’s always in good shape.”

Fear The Dragon was the early-season sensation after taking the North America Cup and Adios, but the son of Dragon Again—Armbro Cinnamon tied up before the Pennsylvania Sire Stakes Championship on Sept. 3 and, except for a Sept. 13 qualifier, hasn’t raced since Aug. 18.

“Sure, I’m a little worried about the layoff,” said Brown. “But I’ve trained him enough and he went a pretty good qualifier the other day. It might not look that good on paper (he went 1:54 at Hoosier Park) but the track wasn’t that great. During the day, we were disappointed, but by the end of the night (given how the track improved), I thought it wasn’t that bad.”

After playing second fiddle to his stablemate earlier in the year, Downbytheseaside heads into the Jug with a fabulous four-race win streak that started with an electric performance in the Milstein, in which he defeated Fear The Dragon, who had drawn the rail and was bet down to 1-5, by going parked the final five-eighths after drawing post 7.

“It looks on paper like Seaside is the better horse right now,” said Brown. “But don’t ever count Dragon out. That horse is coming into the race in pretty good shape.”

Downbytheseaside (Somebeachsomewhere—Sprig Hanover) has only four losses this year. Two to Huntsville and two to Fear The Dragon. All while battling some physical issues.

“In the Messenger elimination, Downbytheseaside was unbelievable,” said Brown. “But I almost scratched him because his feet were killing him at the time. He was on like his fourth pair of shoes in about five days. Then, we finally hit the right combination. When we changed him back to regular aluminum shoes for the final, he was not as good. Then, when we went back to the flip flops at Scioto, Brian (Sears) actually said he was dull, so we changed his bridle a little to train him. I’ll go back to the normal bridle he races in, the open bridle with the Murphy Blind on the left, and use the flip flops for the Jug.”

With the exception of Huntsville, whose connections opted to skip the Jug due to the multiple-heat format, some of the better sophomore pacing colts in training will be on hand to take on the dynamic duo.

“Funknwaffles (Corey Callahan, 6-1) got the rail and is going to get a great trip,” said Brown. “So he could easily be part of the race. Filibuster Hanover (Yannick Gingras, 5-1, post 2) and Boogie Shuffle (Scott Zeron, 6-1, post 6) are coming in off two unbelievable races. Filibuster, I think they raced him kind of easy expecting a hotter pace at Scioto. It didn’t materialize and they raced him from behind (and finished second to Downbytheseaside), but that horse whacked out a :48.2 mile and Boogie sat behind him and beat him that day (Sept. 3) at (Harrah’s Philadelphia). That was a helluva mile. Those are the two that I’m most worried about.”

Brown is well aware of what the Jug is all about from a historic perspective, and while he favors the new format – where a race-off is now unnecessary – he would have been okay with anything thrown his way.

“I’m fine with the new format,” he said. “And I would hate to race three times in a day. I’m sure there are horses that get beat up, roughed up, but so far I have not had that problem. This year (with only eight dropping in) would have been the year to try one trip, but whatever the conditions say, we’ll be here.”

The possible problem with this year’s two-heat, non-elimination format is how much effort will be given in the first heat when the second goes for twice the money and determines who walks away with the hardware. The first heat’s order of finish determines post positions for the final.

“What if my horses had drawn posts 7 and 8?” said Brown. “I would have been very disappointed if we went one trip then. This is the Jug. I don’t think the two trips is the reason people aren’t coming to the Jug. I don’t believe two trips bothers the horses that much. I don’t think you can pinpoint (why more horses didn’t drop in), everybody has different reasons. If it went for more money, I’m sure we’d have more horses. I think you’d have more than you wanted if we went for a million.”

For someone like Brown, who grew up 40 miles from the track and has made his mark in life racing in Ohio, winning the Jug would be beyond special.

Would this be the biggest win of your career? “Yes,” said Brown. “I can remember coming here and hearing Roger Huston’s voice. It made the hair on my arms stand up. There is nothing like being at Delaware. It’s different here. I snuck into the grandstand the year (1977) Governor Skipper won and wound up in a box seat with some elderly people who were nice enough to let me sit with them. I have never missed a Jug since.

“I’m not just in the business to be in the business. I’m a fan. To be here on Jug Day, and racing, and then be in the Jug with the two favorites, there’s nothing that describes what it feels like. These horses have not given me a reason to be overly nervous in any race this year because they always race well. I’m sure by the time the final comes, I’ll be nervous. But let the horses do their thing, the drivers do their thing and the horses will talk for all of us.”

Good thing, because Brown probably doesn’t have the time to spare.