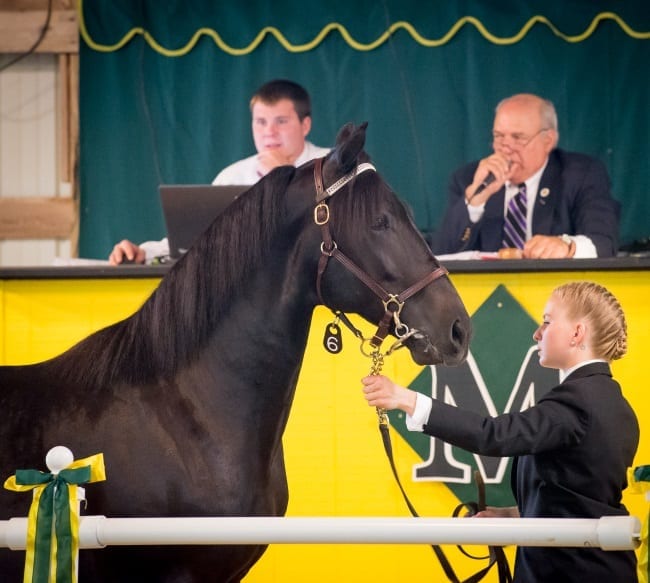 Sunday’s Morrisville Equine College Yearling Sale is key in helping provide a future for the sport’s next generation.

Yearling sale administrator Mary Taylor said, “the money from the sale goes back into the equine program. The students in the program are involved in one way or another with the sale — either as grooms, first leaders, second leaders, office, parking… it’s all different phases of the sale.”

Preferred Equine’s David Reid is also a big fan of the Morrisville sale, which will sell some 80 yearlings beginning Sunday at noon.

“I always love going back to Morrisville College to attend the sale,” Reid said. “This year we have a large consignment, as we are representing yearlings from leading breeders like Crawford Farm, Brittany Farms, White Birch Farm, Lindy Farms. We have a cross section of trotters and pacers that I believe are going to have a lot of appeal for the buyers.”

Reid said he also appreciates the greater impact the sale has on the equine community.

“It’s an established venue. It supports the equine division of not only the college, but also New York state,” he said. “It continuously turns out graduates that participate in the industry today, in key roles at farms and operations.”

Taylor said the sale is key in helping the students to make contacts and get jobs.

“They are not all standardbred students, but through working with the consignors, especially as grooms, they get exposure… they make contacts with Preferred or other consignors and might go to another sale and work for those consignors,” she said. “The breeding kids and those in the standardbred program – we do stand stallions – the kids make contacts to get internships. The breeding students, the last semester of their fourth year they have to go out on a 15-week internship, so they make contacts in the industry.”

Last year, Morrisville was impacted by direct competition from the Goshen Yearling Sale that had its sale the same weekend. This year, the sales are separated by a week. Goshen’s sale was last Sunday.

“I know they talk about the sale down state and how it attracts the guys out of Jersey and Pennsylvania, but this sale has always attracted those people, too,” Hanson said. “If you’ve got a horse worth buying, I don’t care where you’re selling. You could sell it in a field in the middle of Minnesota and somebody is going to show up and buy it.”

Hanson is selling 10 yearlings this year, about the same as he sold at last year’s sale.

“It’s a nice group overall,” Hanson said of his consignment. “It’s nice to have a So Surreal filly in here. The So Surreals seem to be very well accepted and they sold well at Goshen, so it’s kind of nice to have her in the consignment.”

Last year, Hanson consigned the sale topper, Thunderman, a son of Conway Hall out of Ann’s Promise that sold to Chris Oakes for $55,000.

“(This year), I also have the full brother to Thunderman, Charlieman… He’s a nice colt, a very nice colt,” Hanson said.

The fact Morrisville is a local sale is a huge positive for Hanson and other consignors in the region.

“This is a nice sale because it is closer to down state for a number of people, including myself. I live eight miles from (Morrisville) and it’s a lot easier to run over here and sell horses and go home every night than it is to go away for three or four days,” Hanson said. “A lot of local trainers sell here and that’s really what it’s all about. The people that sell here are usually within a couple of hours of Morrisville and it fits their bill. There’s some pretty nice horses in this sale. They are good breeders, too. Just because they may only breed four or five doesn’t mean they don’t have horses worth looking at.”

Hanson added that the weather for Sunday is predicted to deliver summer conditions.
“It looks gorgeous,” Hanson said.