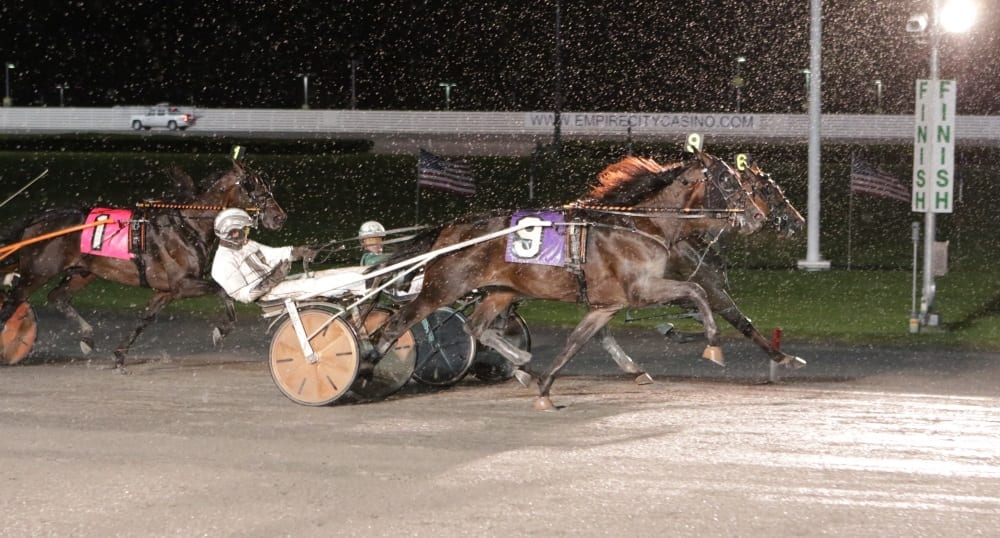 The Hall of Fame driver won two Triple Crown races at Yonkers on Saturday — the $500,000 Yonkers Trot with Top Flight Angel and the $500,000 Messenger with Downbytheseaside.

The wins were by the smallest possible margin, but that didn’t diminish the enormity of what Brian Sears accomplished Saturday night at Yonkers Raceway.

The 49-year-old Hall of Fame driver swept the $500,000 Yonkers Trot and $500,000 Messenger, walking away with the hardware in the track’s signature events for 3-year-olds.

“It’s probably a once in a lifetime thing,” said Sears, reacting to the fact that he won a pair of Triple Crown events on the same card. “It’s a good feeling.”

Admittedly, Sears got a little lucky in winning the Trot, as a pair of miscues set the stage for him to get a winning trip.

After finishing third in his elimination a week ago, Top Flight Angel (Archangel—Top Photo) had drawn post 9 (second tier) for the final. At the start, elimination winner Guardian Angel As (post 4) and Di Oggi (post 2) both broke stride, creating some confusion, and, as it turns out, good fortune for Sears.

“No question those horses going off stride helped,” said Sears. “Otherwise, I’m getting away fourth or fifth and it changes the outcome.”

The trio stayed that way until the five-eighths, when Sears swung Top Flight Angel off the rail and set his sights on the leader.

“(Devious Man) has had some pretty tough miles this year,” said Sears. “So maybe he wasn’t at the top of his game. My colt won at Yonkers in 1:55 earlier this year (on Aug. 3). I thought that made him a contender.”

Top Flight Angel made steady progress around the far turn, and did not pass Devious Man until deep stretch. Pocket-sitting Yes Mickey took a late lunge at the winner, only to come up a nose short in second. Devious Man was third.

Top Flight Angel, whose three wins during 2017 have all come at Yonkers, paid $16.20 to win and trotted the mile in 1:56.3 for trainer Julie Miller and owner Alan Hainsworth.

“You know when you have a hunch about something?” said the trainer about her premonition that her horse would race well. “He just really likes that track. In the elimination, a typical Brian (Sears) elimination. Get the horse out, get him into the final. Brian was really happy with the horse. And then when the draw came out for the final, I figured he was going to sit behind Devious Man (another Miller trainee) the whole way. I was not surprised that he won. I think I have figured him out. Being first up probably wasn’t what we wanted, but when Brian pulled, he obviously knew he was going to go forward. He was going to be ready to pounce.”

Miller also trained Money Mackintosh, who finished sixth. “If he had drawn better than post 7, I think he could have been closer,” said Miller.

Purse money and prestige are great. But when one wins the Yonkers Trot, they also get an invitation to a grueling test, the $1 million Yonkers International Trot on October 14.

So, Julie, is your horse up for it?

“It’s great to be asked and get an invite,” said Miller. “Obviously, we are going to entertain the idea. We are going to talk to the owner and see what he thinks. It’s hard to pass up a million dollars. It’s tough for 3-year-olds facing horses like (2016 YIT winner) Resolve. There are a lot of pros and cons. We’ll just try to make a good decision.” She then added: “When you are going for a million, a nickel (fifth-place check) is pretty good.”

Sears won the first half of his stakes double by scoring with one of the top 3-year-old pacing colts in training, Downbytheseaside, in the Messenger.

Sent off at odds of 1-20, the chalk players breathed a long sigh of relief when he outlasted 22-1 chance Art Scene by a nose after a pulse-pounding stretch drive.

All seemed well in the early stages as after Summer Side (post 2) and Blood Line (post 6) left at the start along with the favorite (post 7). Sears then put the son of Somebeachsomewhere—Sprig Hanover in gear and made the quarter in :27.1 on the front end.

The outer flow did not begin to develop until they hit the grandstand for the first time, which allowed Sears and Downbytheseaside to dawdle their way past the half in :56.

“That probably helped a lot,” said Sears of the :28.4 split. “I was pretty confident, but he didn’t pick up the lines like he did last week.”

Miso Fast, who earned his way into the final by finishing eighth in a nine-horse elimination last week, grinded his way toward the leader nearing three-quarters, providing live cover for Art Scene. As pocket-sitting Blood Line was slowing to a crawl, driver Jordan Stratton smartly steered Art Scene into the pocket, setting up a stretch drive that saw the son of American Ideal-Lover Of Art duck into the passing lane before coming up just short on the wire. Funknwaffles finished third.

“I really don’t know exactly what the scenario was there,” said Sears of his nerve-racking, razor-thin win. “Maybe he wasn’t as sharp as he has been.”

Downbytheseaside is now eight-for-12 this year, good for earnings of just over $956,000. The Brian Brown trainee, whose four 2017 losses have come at the hands of Huntsville (twice) and stablemate Fear The Dragon (twice), paid $2.10 to win and completed the mile in 1:52.1 for owners Country Club Acres, J. Sbrocco, R. Lombardo and Diamond Creek Racing.

She stands by her man

Devious Man has hit the board in each of his 11 starts this year. The New York Sire Stakes star from 2016 won the Beal earlier this year in an upset but has now lost as the favorite in both the Hambletonian and Yonkers Trot.

“He’s had a little bit of sickness,” said Miller. “But (driver and husband) Andy (Miller) was happy with his performance (last night). He’s been everything I’ve wanted. We purchased him as a nice New York Sire Stakes horse. He’s been 1-2-3 all summer, was second in the Hambletonian. You can’t complain about that. He’s racking up money.”