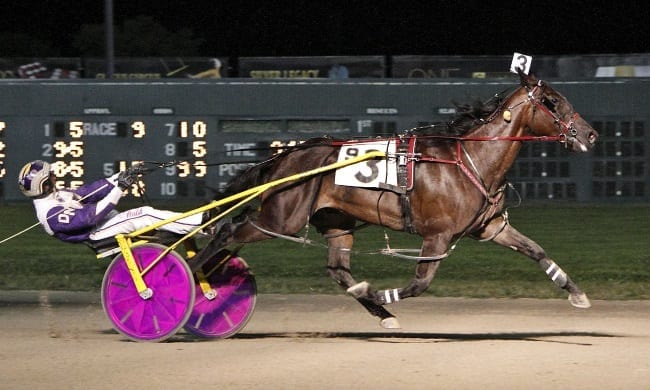 Drunk On Your Love shines in Ohio Super Night action

The Foreclosure N gelding gives an Ohio native a big win on a night featuring eight $250,000 Ohio Sires Stakes championships worth a total of $2 million.

Ohio native Jason Settlemoir can be described as a ‘jack-of-all trades.’ He is general manager of the Meadowlands Racetrack, an executive with Tioga Downs and Vernon Downs and assistant track announcer and simulcast director for the Little Brown Jug. Now Settlemoir can add yet another title to his resume: Ohio Sires Stake Champion owner.

Settlemoir and Mark Ford share ownership in Drunk On Your Love, winner of the $250,000 Ohio Sire Stakes Championship for sophomore pacing colts, the glamour event of the $2 million Ohio Super Night on Saturday (Sept. 2) at Scioto Downs.

Driver Dan Noble elected not to rush Drunk On Your Love out of post 3 and sat fifth on the rail past the quarter mile station in a spirited :26.2. The pair were fourth over in seventh past the half. Big Bad Bruce (Chris Page) led the field past the half in :55.3 and the three quarter pole in 1:23.1.

Noble sent the gelded son of Foreclosure N—Western Show three-wide around the final turn and sprinted clear of Big Bad Bruce by 2 ½ lengths in 1:53.

“As a Buckeye, back here in Ohio to be here with my family and friends, to win this race is nothing short of a dream come true,” said an emotional Settlemoir. “To have a horse of this caliber is a great opportunity. It’s been a lot of fun.

“I thank Mark for telling me that I should buy a part of this horse. I also need to thank Jimmy Pollock, Jr. for the great care he had given him all season Danny (Noble) has done a great job in driving this horse. I just wish Terry was here.”

Settlemoir, who was introduced to the sport by the Ohio Hall of Fame trainer Terry Holton, worked at Scioto Downs from 1995 to 2005.

“This means the world to me,” said Settlemoir. “To have a horse like this is special.”

Drunk On Your Love is conditioned by Pollock, Jr. and now sports 10 career wins and $304,000 in career earnings.

Pistol Packin Mama (Trace Tetrick) gave trainer Tyler George his biggest thrill of his career by overcoming post position 7 to take the $250,000 three-year-old filly pace. The final time of 1:53 was over a ‘good’ track dulled by the remnants of Hurricane Harvey.

The daughter of The Panderosa—Art Debut has not finished worse than second in her 12 career starts. Pistol Packin Mama has now earned $232,750 for the Herres Stables.

“I’ll be honest I was afraid of post 7, but when they went three wide into the first turn and she got to sit fourth, I was a little happier,” said George. “This is by far my biggest win.”

Rose Run Sydney continued her seasonal dominance with a gutsy win in the three-year-old filly trot. Driver Jason Brewer floated the eventual winner off the gates wings and found a hole, third on the rail, allowing Gabbysloosechange (Dan Noble) to control the fractions of :27.3, :58 and 1:27.2.

Rose Run Sydney sprinted clear by 1 1/2 lengths to win in 1:57.1. The win brings Rose Run Sydney’s career earnings to $337,892. Steve Carter is the trainer and co-owner with Adam Friedland and RBR Racing.

“The filly is very handy, she behaves and drives like a car,” said Carter. “Adam (Friedland) said she was the best filly in sale, so I bought her (as a yearling) based on that.”

Owner/trainer Chris Beaver capped off a busy night with a Fraser Ridge (Ronnie Wrenn, Jr.) win in the sophomore colt trot. The son of Triumphant Caviar—Classical Mary battled his stablemate Buckeye Boss through the last turn and held off a late charge by Full Surge (Mike Wilder) and Magic Vacation (Kayne Kauffman) to score in 1:55.2.

Fraser Ridge is owned by Donald Robinson, Robert Mondillo, Beaver and RBH Ventures. He now has $370,457 on his card.

The Super Night started with a bang as Impinktoo (Peter Wrenn) scored a 14-1 upset over the previously undefeated and 1-9 choice Looking For Zelda in 1:57 to capture the two-year-old filly trot. Jim Dailey trains the daughter of Manofmanymissions—Margie Seelster for William Walters, Joe McLead and RTK Racing.

The two-year-old colt trot went to Mission Accepted (Ryan Stahl) who wore down the pacesetting Sultan Of Cash to win in 1:56.3. Jeff Conger trains and co-owns the son of Manofmanymissions—Witty Girl with Knox Services and David B. Willis.

Trainer Jim Dailey made a return trip to the Scioto winner’s circle when Bad Girls Rule (Dan Noble) went gate-to-wire to win the two-year-old filly pace in 1:54.3. The pocket sitting Believe In Waco (Art McIlmurray) held on for second. The daughter of World Of Rockinroll—Bad Girls Club scored her fourth win in seven seasonal starts for the 3rd Floor Stable.