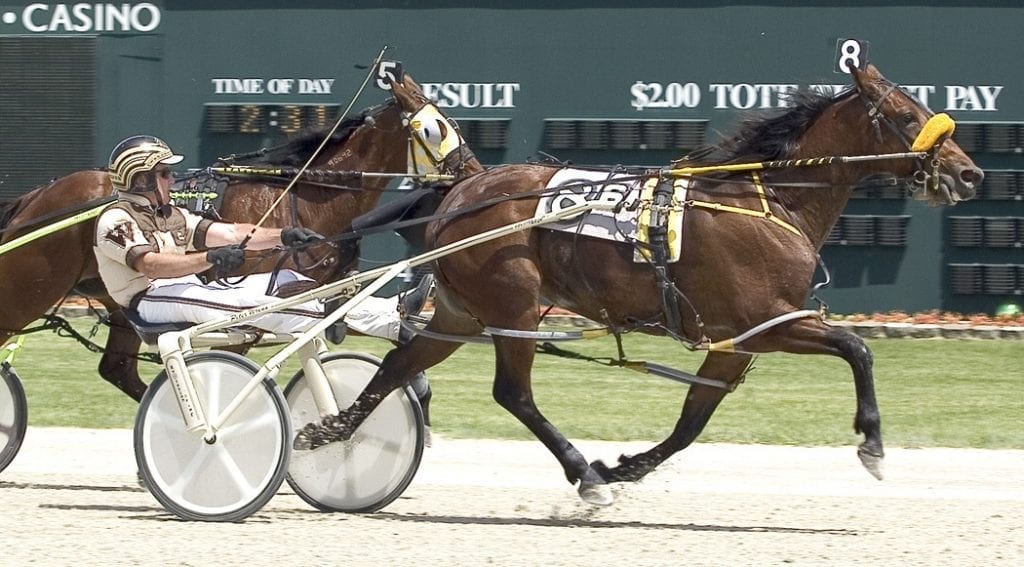 The Indiana-bred filly is the daughter of Ag-N-Au Bluegrass, a talented mare John Merkel initially thought had little interest in racing.

When trainer John Merkel watches pacing mare Au D Lox Bluegrass line up behind the starting gate at Hoosier Park Racing & Casino, he’s never surprised by the results. The four-year-old started the year in his barn before being sold to Jeff Cullipher and Tom Pollack. Merkel also conditioned the pacer’s dam, Indiana champion Ag-N-Au Bluegrass, so he has strong connections to both.

As Merkel trained down Ag-N-Au Bluegrass (pronounced Silver-N-Gold Bluegrass) in the spring of 2008, he wasn’t sure the filly would make it to the races. When it came to the work needed to build a foundation, the Whitefish Falls lass seemed to lack the motivation.

“She was so laid back,” the trainer said. “You would try to train her and she didn’t really act like she had much interest.”

He was hesitant to load Ag-N-Au Bluegrass on the trailer and take her to Indiana Downs to qualify. But Merkel had other freshmen ready to go, so he brought her along. That day she circled the oval for Dan Shetler in 2:04.2, six seconds off the pace set by Merkel’s other charge, Ey-Wilwe Bluegrass. Two weeks later she won a qualifier in 2:00.2 with Trent Stohler at the helm. Despite the win, the trainer was still reluctant with the filly.

The rest, as they say, is history. In eight freshman starts, Ag-N-Au won three times and finished second on four other occasions, including both Indiana Sires Stakes finals. She finished the year with $69,350 in earnings, but that was a small preview of things to come. Returning at three, Ag-N-Au Bluegrass elevated her game. Racing at Hoosier Park, she reeled off six straight wins at one point and finished second to High Speed Life in the $150,000 Indiana Sires Stakes final. The sophomore would capture the $150,000 final at Indiana Downs, taking her mark with a 1:52.3 effort. Ag-N-Au Bluegrass finished the year with a 9-7-0 record from 19 starts and added another $232,355 to her bankroll.

After the 2009 season, Ag-N-Au Bluegrass was retired to broodmare duties and bred to Panspacificflight. That pairing produced a filly that Overstreet named A Loskoz Bluegrass. The pacer never made it to the races. Despite having great potential, an injury ended her racing career before it had a chance to unfold.

“She had a lot of promise. I really liked that filly,” Merkel said. “I had her trained down to (2):28 or something like that and she kicked the walls and shattered a sesamoid.”

The second foal from Ag-N-Au Bluegrass, also sired by Panspacificflight, showed what the mare could produce. Au D Lox Bluegrass had the misfortune to race against the speedy freshman Topville Cadillac in 2015, and the dominating Seventimesavirgin in 2016, but she held her own both seasons. The filly finished second in the $220,000 Super Final at two and earned over $120,000 as a three-year-old. This spring she won her first two starts stepping into the open ranks, and hit the board in five of her six races for Merkel and regular driver Trace Tetrick.

“She finally just started coming around this year,” Merkel said. “When she won those first two starts in (1):51, Trace said, ‘Man, this is a much different filly this year than she was last year.’ She really filled out and matured.”

The more mature mare grabbed the attention of Cullipher and Pollack. In previous years they had been competitive in the filly and mare invitational class at Hoosier Park with Montenegro. With that mare now out of the barn, they were looking for a suitable replacement, and when they inquired, Au D Lox Bluegrass was available.

“We thought we would have a top mare that was competitive in the invites,” Cullipher said. “She’s a brute. I just don’t see any quit in her at the moment.”

Since the acquisition, Au D Lox Bluegrass has won Hoosier Park’s filly & mare invite five times, finishing second twice. The mare has accumulated a cool $67,730 during that time for her new owners. She also lowered the track record for older pacing mares with her 1:49.2 score on July 8, romping by nearly five lengths.

Au D Lox Bluegrass, however, isn’t the only horse in Cullipher’s barn that traces back to Ag-N-Au Bluegrass. A Loskoz Bluegrass never raced, but she is producing as a broodmare, with her first foal going to auction last fall in the Hoosier Classic Sale. Always Curious, sired by Always A Virgin, was purchased by Cullipher and Pollack for $37,000. With four starts under her belt, the filly has won twice, the latest coming August 23 in a $22,000 Indiana Sires Stakes consolation. There, Always Curious distanced herself from the field by just over four lengths in 1:54.3.

“She was my best two-year-old training down. I don’t think she’s shown her true potential yet,” Cullipher said of the freshman. “She’s well put together and she’s got the speed, we’ve just always had bad timing.”

In a division that features clear leader Dee Rocks, a winner in eight of nine starts, the trainer and co-owner believes his filly is coming around and is on par with the rest of the freshman pacers. And with two rounds of eliminations and finals left before the $220,000 Super Finals, he is optimistic Always Curious can secure the points needed to make the grand finale. If her consolation performance is an indication, the filly is moving in the right direction.

“We’re on the right track with her now, and I do think she’s got a very strong chance,” said Cullipher. “We’re just hoping for some good post positions and some racing luck.”

Merkel has no vested interest in either Au D Lox Bluegrass or Always Curious, but the trainer is keeping tabs on both. He wants to see the offspring of Ag-N-Au Bluegrass, a mare that he broke and developed, sparkle just as she did during her racing career.

“I think this is the kind of family that will go on and keep producing,” he said. “It’s always nice to see them keep on producing and the family keep on going. It’s a thrill to do that. It’s just like kids; you see them grow up, advance, and do well. It makes you proud.”