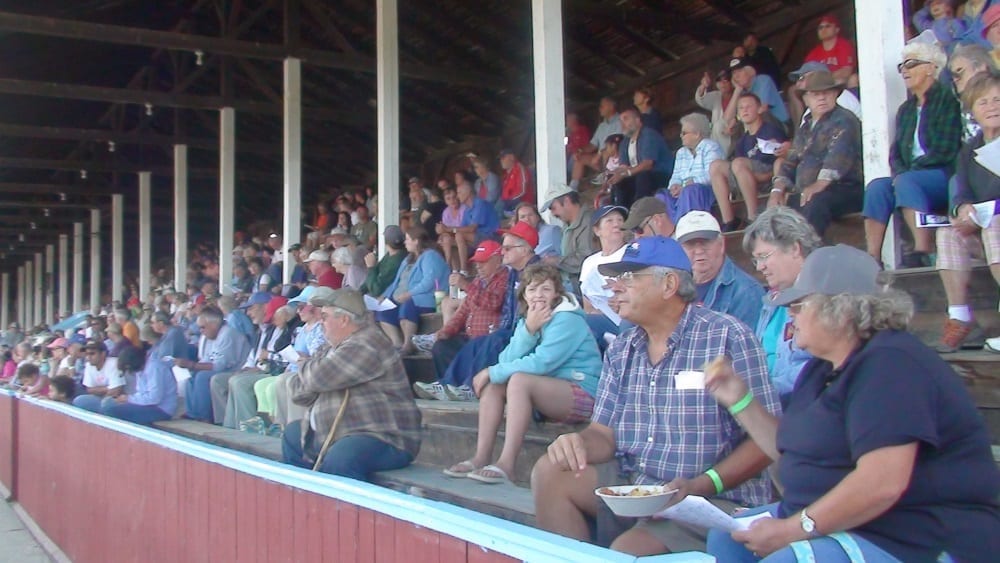 My adventures calling the races at the Orleans County Fair in Barton, VT.

I can tell you that being a race caller is an exhilarating experience. You paint a word picture of what’s happening for the fans in the stands who don’t have the view that you do. It’s empowering.

But unlike at big-time tracks, when you call county fair races, it can be hectic, and at times, you are calling blind.

Forget about perfect sight lines in pristine booths with television monitors. At the fairs, you have obstacles to deal with — literally. Sometimes you call from the infield. Forget about being high atop the action on top of the grandstand. No matter. I love it just the same.

My wife Debbie and I made the 353-mile drive from our home (which is one mile from the Meadowlands) to the Orleans County Fair in Barton, VT, several days ago. What transpired over the two-day meeting might surprise you.

We got to the fair about an hour to post time on Thursday (Aug. 17) to say our hellos and get set up. I call the races and Debbie sits in the grandstand and doles out harness racing souvenirs to an appreciative crowd. The winners are picked randomly from handwritten numbers that appear on the programs. “Buying a program makes you eligible to win some marvelous harness racing souvenirs” I tell the patrons. It helps sales.

Another function that Debbie has is to wave to the live band on stage that plays between races to stop playing when the horses come on the track so I can play the bugle off my iPod and give the post parade. Usually, the band complies.

We got word that a horse was down before the card began. Chariotgreysailed had collapsed in the barn area and was scratched from the second race. He had finished third the day before at the Westport (NY) Fair. He came back fine, apparently, as he would race on Friday. You have to be tough to be a county fair horse.

As I scanned the track from the infield judges’ stand I could not find the quarter-mile marker. Years earlier, Lori Royer, who has been on the scene for a decade doing just about anything that needs doing at the fair, had spray-painted the top of the quarter pole orange so I could see it clearly. The problem: There was now a french fry truck blocking my view. I bet Ken Warkentin never had this problem at the Meadowlands.

“Well, when they hit the french fry truck, I’ll wait an instant, then click my watch to get you the quarter time,” said George Churchill, who is one of the fair’s driving forces as well as its timer. Sounded good to me.

Then there’s the issue of the first turn. As soon as the race begins, the presiding judge and I can see the horses for a few seconds before they disappear around the first turn behind the grandstand stage. Then they hit the burlesque show tent before emerging back in sight as they straighten up down the backside. I often use “when they went into the bandstand turn, so and so was on the lead and so and so is probably in the second spot.” I never heard my friend Roger Huston have to be as creative at the Little Brown Jug!

As fate would have it, just after the start of Race 4, Ruby Red Slippers went off stride and then bothered another horse before going down on the track. I can’t tell you how it looked. I had no clue. But the screams from the grandstand told me all I needed to know.

I continued to remind the other three drivers in the race to avoid the mishap in the first turn but I don’t know if they can hear me. I pause, worried about what might happen and forget to get the quarter time… and the half time. There’s no ambulance in sight. How bad are driver Barb Hudson and her horse hurt? I can’t see! The crowd kept demanding the race be stopped. Debbie tries to convince them you can’t do that. Luckily, there were no additional problems as the field passed Ruby Red Slippers heading past the half and horse and driver were okay.

We were going to be busy today. We had a six-race card as compared to five on Thursday. Harness racing at fairs is drying up as the horse population dwindles.

Race secretary Dale Allen was unfazed. “There’s not a lot of aged horses left racing,” he said. “It’s been tough at raceways, so it’s tougher to have county fair horses.”

There were 16 horses in to race for both cards of the meeting, many of which raced both days. Some went twice on the same card. But before you think that’s crazy, think again. “Last year was about the same,” said Allen. “And the purse account is average for a fair track.”

Purses totaled $6,500 for the 11 races conducted on the two days. And tracks without slots think they have small purses.

The 25-mile drive up Route 91 North from our hotel in St. Johnsbury was a cloudy and rainy one Friday morning. Post time was 11 a.m. (it was 1 p.m. on Thursday) so racing would end early. Then the track could be prepped for the tractor pull later in the day.

We get there and everybody looks depressed. The track is in such bad shape from the rain that the race card might be canceled. I have to admit that I said to myself: “353 miles of driving and they are going to cancel?!”

So presiding judge George Hickman, an 85-year-old veteran racing official who at one time served as the head of the Virginia Racing Commission and was an associate judge the night of the 1998 Breeders Crown at the now-defunct Colonial Downs, meets with the horsemen, trying to salvage the card. They agree to meet again at 11:30 a.m. to determine if the track, now that the rain had stopped, would be good enough to race on.

Irv Mauran, who at 70 years of age was the leading driver at the fair not only this year but also in 1977, had his doubts. “It wasn’t safe when I walked over there,” he said, referring to the deep mud that had gathered near the start/finish line. “But a long time ago, we had a judge tell us, ‘Boys, if you want to race, drive according to conditions and look out for each other.’”

So the mud was pushed to either side of the track and the races started after an hour delay.

What a superb job by the track superintendent! The races went off without a problem.

In fact, the fastest mile of the meeting was turned in by Klondike Art in the Friday finale. He won in a sparkling 2:00.3. Had he gone just four-fifths of a second faster, he would have completed the third sub-2:00 mile in the 150-year history of the track.

They say that no one is irreplaceable. I disagree. If not for the efforts of Churchill, whose father “Doc” ran the racing at Barton for decades, and Kim Brooks, it’s highly likely that racing would die at the Orleans County Fair.

“It’s our horsemen that have been coming here for 50 years,” said Brooks of why the racing continues. “They know if they stop coming, the racing will stop. That’s why we try to run a meeting where everybody gets a check.”

While folks who head out to parimutuel tracks might scoff at the small fields offered at Barton – no field had more than four starters – the fans in the stands seemed quite pleased at what they saw.

“We had 168 people in the grandstand yesterday,” Brooks said proudly of her fair that received the Blue Ribbon Fair Award from the United States Trotting Association in 2008 for preserving the sport of County Fair Racing.

“Most everybody who works the fair works for nothing,” said Brooks, who serves as chart-caller and horsemen’s bookkeeper, in addition to raising money (some from her own pocket) to keep things going. “But we love the sport and the horsemen, so this is what we do.”

Kim, that’s great. Count me and Debbie in for next year.

Just one thing: Can you tell the french fry truck to setup in a different spot?