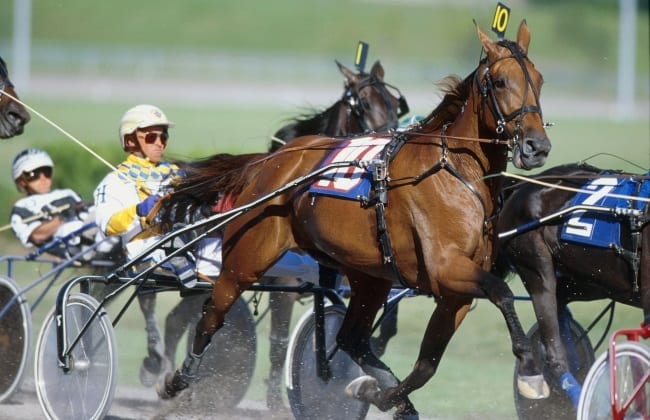 Peering in the pedigrees of the Hambletonian hopefuls

The field is a fascinating mix of international bloodlines and strong families with great legacies.

Perhaps the moon was in the right phase on the evening of April 4, 2014 because two of the Hambletonian starters this year were born that day at Hanover Shoe Farms.

These were Stealth Hanover and Long Tom. Their sires — Andover Hall and Muscle Hill, respectively — are also the leading sires of this year’s Hambletonian starters.

Ironically, two other 2017 Hambletonian hopefuls were born on the same day of March 24, 2017. There were Sortie, foaled in Paris, Kentucky, while Seven And Seven was foaled to the northeast in Shreve, OH.

Of course, the absence of Walner, last year’s juvenile champion, makes the Hambletonian anyone’s race. Walner’s talents seemed so extraordinary that the Hambletonian was virtually conceded to him. But there is a reason they give the trophy after the race, not before it.

As has been detailed, this year’s Hambletonian has a distinctively international flavor with two starters by French stallions.

The foremost is International Moni, the perfect-pedigreed colt by Love You out of the international trotting queen Moni Maker.

Moni Maker won many of America’s biggest trotting races as well as the Prix d’Amerique in France and Elitlopp in Sweden. Love You has been a champion sire in France for many years and his semen is shipped widely, making him the champion stallion in countries where he has never stood.

International Moni is also an embryo transfer foal, and a victory in the Hambletonian would certainly quell some of the qualms that horsemen often have about purchasing ET foals.

Love You, a robust chestnut stallion, is also the sire of the dam of Shake It Off Lindy. This is the result of the Antonacci family’s commitment to international trotting. Mixing American and French blood has been the winning formula for many years in Europe where races are longer and the biggest prizes are for older horses. Now we’re beginning to see the impact of the Franco-American blend in American stakes racing.

The other French connection in the Hambletonian is Victor Gio IT, who was foaled in Italy but was sired by Ready Cash, a top French stallion. Ready Cash was a blazingly fast trotter and engaged in memorable duels with the Swedish champion Maharajah.

I first heard of Ready Cash many years ago on the eve of the Prix d’Amerique in Paris, when a top Swedish trotting journalist told me to watch Ready Cash closely in a 4-year-old race.

“Ready Cash is a French trotter with American-style speed,” he told me. And he was dead right.

A trio of stallions tie for broodmare sire credits with a pair of 2017 Hambletonian starters. Andover Hall, Kadabra, and Pine Chip each have two daughters with sons in the race.

Not surprisingly, April and May tie for honors as they leading birth month with seven Hambletonian starters each.

For those who shy away from late foals, it should be noted that Devious Man (May 21), Shake It Off Lindy (May 25) and International Moni (May 29) would each fall into that category.

Horror of horrors, Achille Duharas is a June 2 baby! Historically, many top horses have been late May foals.

There are other interesting observations that you discover when poking around in the pedigrees of this year’s starters.

Moni Maker is not the only former female Horse of the Year with a son in this year’s race. Dover Dan is out of CR Kay Suzie, the 1995 Horse of the Year. The Hambletonian that year proved to be one of the few bumps she encountered as she jumped it off as the heavy favorite.

It should be noted that Dover Dan arrived when CR Kay Suzie was 22 years old and his 1:52.4f mark this season makes him the fastest foal of his celebrated mama.

Devious Man, one of the favorites, was born to the mare Miss Garland when she was 24 years old. He was her final foal, but she’d done quite well earlier in life as she produced the Hambletonian winner Vivid Photo.

Who knows what to expect in this year’s Hambletonian? All that is left for the fans is to sit back and watch as the horses duke it out at the Meadowlands.