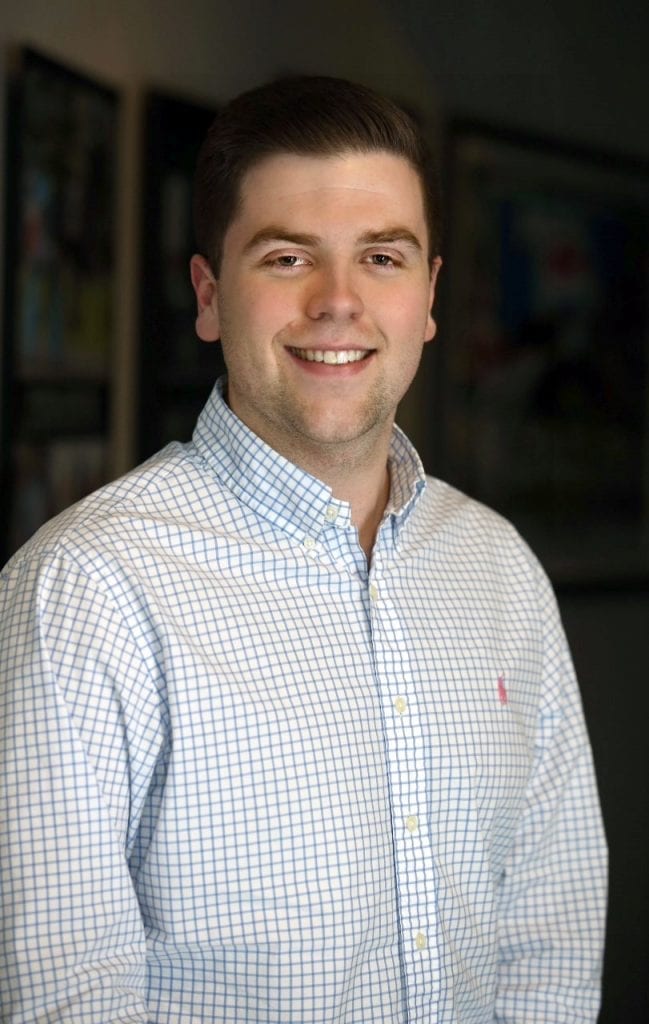 Mark McKelvie is excited about his opportunity to call the Grand Circuit races this fall at Red Mile, but the member of the Woodbine Entertainment Group team is in no way is trying to replace the late Sam McKee.

The passing of Sam McKee on March 8 silenced perhaps the best-loved voice in harness racing. When Grand Circuit racing returns to Kentucky’s Red Mile Sept. 28, Mark McKelvie will not be attempting to replace him. The 24-year-old was formally declared the Lexington landmark’s Grand Circuit race caller in a May 16 media release, but he acknowledges there is no replacing McKee. “I was a really big fan of Sam, and I know how much he meant to the sport.”

If McKelvie’s name, and voice, are relatively unfamiliar, it’s by design. Yet the 2016 Dan Patch Award “Breakthrough” finalist comes from a harness racing bloodline: His father, Scott McKelvie, is director of racing and standardbred race secretary at Mohawk and Woodbine Racetracks; Lori, his mother, is a Standardbred Canada field representative. Mark’s sister Tamara has worked in hospitality at the Mohawk.

But talent is not decided by pedigree alone. Mark says he never dreamed he would become a racetrack announcer, although he has long aspired to a career as an NHL play by play announcer.

“When I was younger, I’d just stand on the rail at Mohawk every Saturday night, usually, during the summer. I’d stand at the finish line and watch the races, from start to finish,” Mark said. “Right away, from a young age, I took a real liking to the sport. By the time I was old enough to be out on my own, I wanted to be here every night that I could be.”

He took a three-year journalism program at Toronto’s Humber College, specializing in broadcasting in his third year to build on his existing qualifications. “I was already doing broadcasting for hockey. I’ve been doing that since I was in high school,” he says. “I started doing the local tier-two junior team (Milton Icehawks Junior “A”). I was their PA announcer, then somebody didn’t show up one night, and I got thrown into that job.” Mark volunteered with the team throughout his high school and college years.

In 2015, he began providing colour commentary for the Ontario Hockey League’s Owen Sound Attack on Rogers Television. “Then, last season, the opportunity opened up to become the play by play announcer, so I was doing the play by play for all the home games and I also got to do some of the radio broadcasts for a lot of their road games,” he said.

His evolution as a race caller has taken a less-direct route.
“I don’t remember how it came together… I guess they wanted somebody to call the baby races (at Mohawk/Woodbine), because they had enough owners show up to watch them. Different officials here also knew that I went to school for broadcasting and had an interest in it.”

In the summer of 2013, Mark conducted winner’s circle and paddock interviews for the Mohawk simulcast show. “I guess it kind of came naturally that (race calling) was something to try,” he said. “I’d always had kind of an interest in trying it, and it really grew when we would go to Woodbine in the winter and I started working here, full-time.” He became Woodbine Entertainment Group’s standardbred communications coordinator in 2014, taking the mic without fanfare when there was demand for calls at late-afternoon qualifying races on Thursdays.

“It just made sense — I’m there, so I might as well call them, and the other thing is, you’re here every night, so if something ever happened, it’s nice to know that you could step in, if need be.”

And that’s exactly what happened. “One night, (regular announcer) Ken Middleton got stuck in traffic. I had to call the first race, and it just kind of grew from there.”

Mark says he did not apply for the Red Mile position.

“They contacted me. I got a call from (Red Mile co-owner) George Segal, back at the end of February-early March. He asked me if I was interested, because my name had been recommended. Basically, what he said to me is that they wanted someone who is young and a bit of a newer voice in the sport, and they thought that that would add some fresh blood to the sport and kind of give some new energy to the Red Mile.”

There would be no filling the shoes of McKee, yet someone had to describe the action during the stake-studded Grand Circuit meet at Lexington.

Mark considered his opportunity in light of McKee’s legacy and the deep sense of tradition at the Kentucky track. “Basically, when I took the job, one of the things I was really excited about was that I’ve been going to the Red Mile since I was a child, going to the Grand Circuit every year, listening to Sam calling so many races. I really appreciated his style and the way he did things.”

Gabe Prewitt will be announcing for his 10th season at Red Mile when racing resumes July 27. “Gabe and I have exchanged some messages, so hopefully I’ll get down there during the early meet, just to really get a view from the booth there,” Mark said. He attended a meeting at the track in early May, with an important stop confirming his role: “I had never been up to the announcer’s booth before at the Red Mile, despite having been there so many times.”

There are challenges unique to calling a track with Red Mile’s layout. “People tell me how difficult it can be to see the top of the stretch there at The Red Mile, because the stretch is basically a quarter of a mile,” said Mark, who sees some similarities with Mohawk. “You’re looking at them kind of head-on when they’re turning for home.”

The newest Red Mile race caller will arrive in Kentucky with an open mind and a style still taking form. “I know I’m young, but I feel like I’ve been watching races so closely for so long that I’ve picked up on different things that different announcers do that I like,” he said, adding that his all-time favourite call is McKee’s 2008 Meadowlands Pace.

The talent within the WEG ranks offers him opportunities to consult with seasoned peers. “If I have a question, I can go to Ken Middleton or whoever, and get their advice. Lucky for me, there’s a lot of people who have reached out, whether that’s advice or just best wishes. It’s good to have a lot of support.”

He’ll resume duties as WEG’s standardbred communications coordinator upon conclusion of the Grand Circuit meet. “They were pretty excited because it’s not only good for me, but it also looks good on the company, I think, that somebody from Woodbine/Mohawk has an opportunity to go and call an important meet,” Mark said.

Bringing in a lesser-known announcer at Red Mile stands to benefit both. “Sam, everybody knew him as the announcer from The Meadowlands, although he was easily one of the top announcers in our sport,” Mark said. “I’m not the full-time announcer at Mohawk or Woodbine, or a full-time announcer anywhere, so there will be a lot of people who will hear my voice for the first time when I’m calling the races there. Hopefully, going forward, they’ll identify my voice as ‘Oh, there’s the guy who calls the Grand Circuit meet at the Red Mile!’”