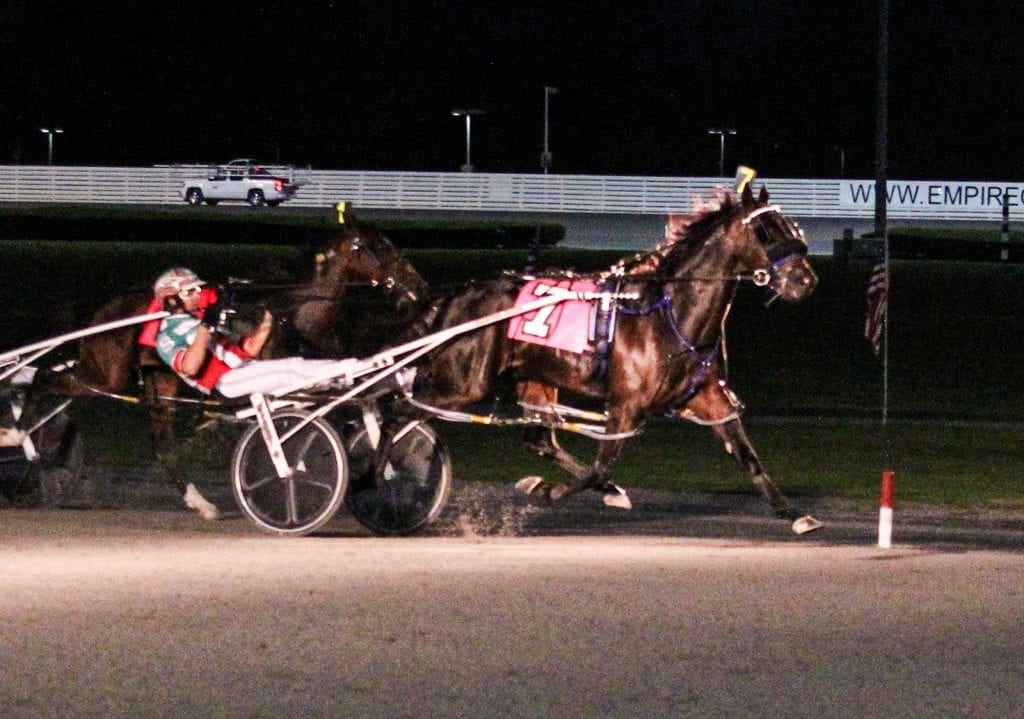 Kwik Talkin puts connections in the limelight with Sheppard win

Robert Robinson and Scott and Lisa Henry were emotional after winning the $110,500 race for rookie pacers at Yonkers.

Robert Robinson was beside himself with frustration as he attempted to watch Kwik Talkin in a Lawrence B. Sheppard elimination last Saturday night at Yonkers Raceway.

His exasperation had nothing to do with the colt’s winning performance, but with a broadcast signal that was lost as the opening half-mile unfolded.

This week, there were no technical difficulties – no issues of any kind – since Robinson watched in person as Kwik Talkin captured the $110,500 Sheppard final in a stakes record of 1:53.4 on Saturday night at Yonkers.

The Ontario-based Robinson, 50, known for doing an excellent job developing young horses that he then turns over to others for their racing careers, made sure to savor every stride his pace-setting youngster took as the Well Said—Kwik Dial colt won for the fourth time in as many starts. Hail the Taxi, a 35-1 longshot, had held the stakes record with a time of 1:54.1, set in 2012.

The outcome meant as much to Scott and Lisa Henry, the husband and wife team from Kingston, ON who appear to have hit it big as first-time owners. Scott and Lisa both became emotional in the winner’s circle.

Scott said he thought of his late father, Sonny, and what the sweet moment would have meant to him.

“He had horses. He was an owner and trainer,” Scott said. “He gave Robbie some catch drives when he first started driving.”

Lisa beamed with pride after winning driver Jordan Stratton presented her with his whip as a keepsake she will surely treasure. “It’s like watching your son win a football game or win at the Olympics,” Lisa said. “(Kwik Talkin) is my star.”

Robinson has always operated with a modest budget, leading him to be painstaking when he prepares for the annual Harrisburg sale.

“I study hard, and when I go to the sale, I probably look at over 100 yearlings,” he said. “You have to look at a lot because your budget is limited. You have to really do your homework.”

The inability to spend big also leads Robinson to overlook flaws that tend to discourage others. He noted that Kwik Talkin toed out a bit in his right front.

“Does that not concern you?” a skeptical friend asked before the auction.

Robinson knows how challenging sales can be. He was the underbidder when Summer Side, last year’s Sheppard winner, was hammered down for $15,000. He made sure Kwik Talkin did not get away, going to $18,000 for him at last year’s Harrisburg sale.

He recently rejected a substantial offer for the bay colt in deference to the Henrys. They did not want this ride to end, no matter what the profit might have been.

“I wouldn’t want someone to sell my horse on me. They are first-time owners,” Robinson said. “It looks like a good decision.”

Robinson needed the benefit of replay to see Kwik Talkin sit off the pace in taking last weekend’s elimination in 1:54.4, the fastest of three eliminations by more than two seconds. This time, his heart was in his mouth as Stratton gunned his horse from the seven hole in a field of eight only to be caught wide around the first turn.

Kwik Talkin persevered to make the early lead for a determined Stratton, who felt he had the best horse and wanted to leave nothing to chance.

With well-regarded Springsteen, the eventual runnerup, and driver Jason Bartlett in hot pursuit, the eventual winner blazed the opening quarter in 27.3 seconds, the opening half in a sizzling 56 seconds. Stratton admitted to being very concerned at that point.

“We were a little wide the first turn and a half in :56 was a lot faster than I wanted to go,” he said. “But he got a little breather up the backside and he responded.” The opening three-quarters went in 1:25.2.

Kwik Talkin surprised Rob Harmon, his trainer, in a couple of ways.

“At the start, I didn’t think the race was going to go that way at all,” Harmon said.

Stratton, though, was justified in the end, and the newly-crowned Sheppard champion continues to respond as the competition grows keener. The Pennsylvania Sire Stakes at The Meadows will be next.

“He does surprise me because when I sit behind him, he’s on the lazy side. He’s just out there having fun,” Harmon said. “When a horse comes next to him, he’s like a different horse. It’s like a switch that turns on.”

For Robinson, there is a chance that Kwik Talkin’s early success may be career-altering. Perhaps he will have a bit more to spend for quality prospects in the future.

“Maybe this will help me,” he said. “Maybe people will recognize the good work I do.”

The race honors the late founder of famed Hanover Shoe Farm. Sheppard was inducted into the Hall of Fame in 1967, one year before he died.