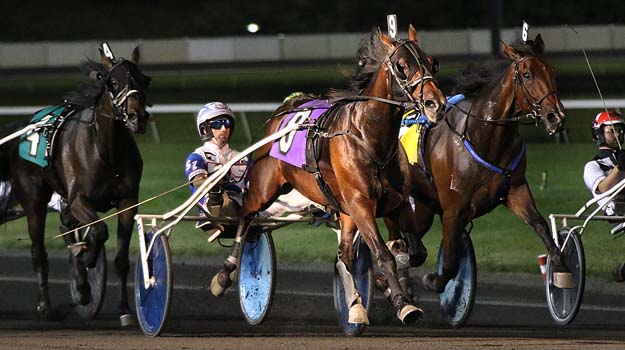 Marion Marauder back and better than ever

The 2016 Trotting Triple Crown winner posted an impressive victory Saturday in the $240,000 Graduate Final for trotters at the Meadowlands to the delight of his co-trainer Mike Keeling.

Mike Keeling said he’s thrilled Marion Marauder has picked up where he left off last year when the won the Trotting Triple Crown and was named Trotter of the Year. Saturday at the Meadowlands Racetrack, Marion Marauder and driver Scott Zeron returned the site of their 2016 Hambletonian triumph and easily won the $240,000 Graduate Final for 4-year-old trotters, despite it not being an easy trip from post nine.

“It was a tough trip. I know he can handle first up, but being parked the whole way, you’re a little concerned,” said Keeling, who shares Marion Marauder’s training duties with his wife, Paula Wellwood. “Scott thinks he was as good as he’s probably ever been.

“The horse loves to race and when he’s got a chance to lay outside of them and kind of grind away, he likes that. It just worked out well and he was good. He’s a good horse.”

The 1:51.2 career-best triumph was three-quarters-of-a-length better than 59-1 shot Warrawee Roo. Dayson was third.

Keeling said they were fortunate to be able to race in the Graduate final after only competing in — and winning — one leg of the series (in Marion Marauder’s seasonal pari-mutuel debut June 11 at Tioga Downs).

“Being able to fit the Graduate in and fortunately get into the final only racing in one leg really set things up nicely,” Keeling said. “We knew that the Graduate was going to be iffy for us. We didn’t want to push him and we’ve been able to stay on schedule and, with him, he always makes us look pretty smart.”

For Marion Marauder, a son of Muscle Hill—Spellbound Hanover who became the first Trotting Triple Crown winner to compete at the Meadowlands as a 4-year-old, it was his second win in three starts this season. His career earnings now exceed $1.9 million for owners Jean Wellwood (Paula’s mother) and Paula and Keeling’s son, Devin Keeling, all of Ontario.

“He’s a special horse and we’re just fortunate to have him,” MIke Keeling said, adding that Marion Marauder’s next race will be next Saturday the Hambletonian Maturity at the Meadowlands.

“We’re also really looking to race him in the Cashman on Hambo Day. We paid him into that race in Plainridge (the $250,000 Spirit of Massachusetts Trot on July 28), but I don’t think I can race him four weeks in a row, so it might be the one that suffers. But, we’ll see what next week brings. We’d like to go to Boston because it’s the first one and we have a lot of friends in Boston, so it would be a cool thing. But that will be his first time (against older horses). Any of the races after the Hambletonian Maturity is when he meets the top aged horses and we want to make sure he’s on point for those efforts.”

In the $240,000 Graduate Series final for 4-year-old pacers, 6-5 favorite Sintra followed the cover of Check Six around the last turn before bursting through the stretch to win by 4-1/2 lengths over Boston Red Rocks in 1:47.2. Western Fame finished third.

Western Fame, Lyons Snyder and Dr J Hanover all took turns on the front as the field reached the first quarter in :26.3, half in :53.2 and three-quarters in 1:20.4. Check Six battled with Dr J Hanover for the lead on the last turn, but Sintra was in striking position.

“I thought I had the best horse, I just had to find the right spot with him,” winning driver Jody Jamieson said. “It worked out well. I got to follow a live helmet, I almost ran over Yannick (Gingras with Check Six) at the head of the stretch I was so live. This horse just keeps bailing me out every time I get to sit behind him.

“The sky is the limit. This horse has just been a champ ever since I started driving him. Last year Betting Line got the better of us most every time, but he’s had another year to develop and he showed it tonight, wrapped up in (1):47.2. Simply amazing from where I was sitting.”

Sintra, who paid $4.60 to win, is trained by Dave Menary for owners Brad Gray, Michael Guerriero and Menary Racing, all of Ontario. He has won six of eight races this year and earned $209,202. For his career, the son of Mach Three out of Dancin Barefoot has won 14 of 27 starts and banked $445,762.