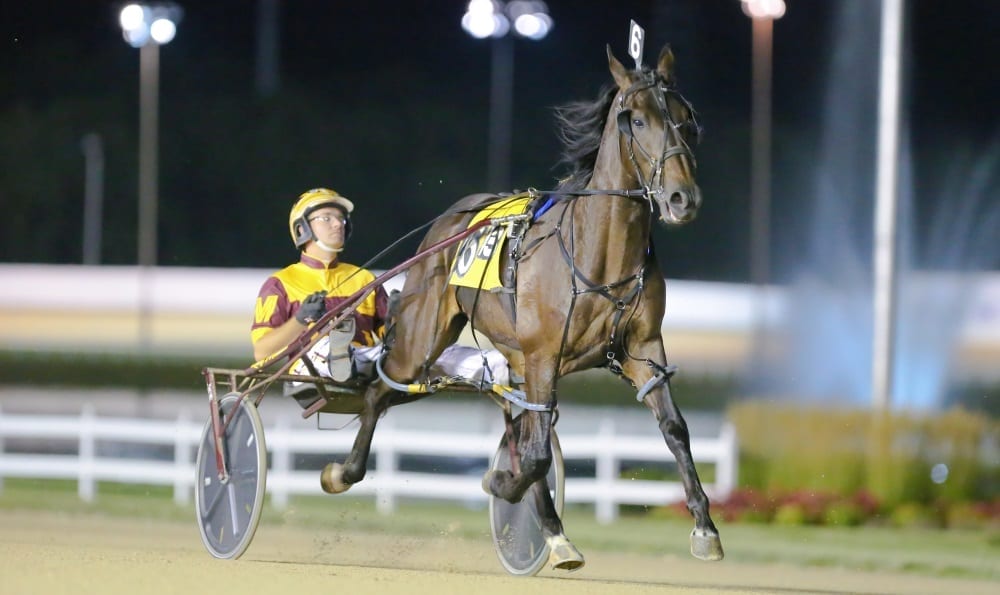 Indiana-bred Beckhams Z Tam has been both a test and a delight for Wilbur Eash and Jamie Macomber. Saturday at Woodbine, the pair hopes the son of Always A Virgin qualifies for the $1 million Pepsi North America Cup final.

Over the last two decades, scores of horses have passed through Wilbur Eash’s Topeka, IN barn. One, however, has separated himself from the group as particularly memorable to the owner and trainer. A conditioner who has developed multiple Indiana Sires Stakes champions, Eash considers sophomore pacing colt Beckhams Z Tam a special individual.

“He’s like one of a kind. He was just something special,” Eash says of the son of Always A Virgin. “He and I just got attached early on. I’ve never had a colt like him. I’ve enjoyed him every minute of the day.”

It was Eash that picked him out of the Hoosier Classic sale in 2015, going to $19,000 on behalf of New York based Z Tam Stables LLC. He had campaigned the dam, Sara’s Lucky Charm, during her career, and he liked the cross of Always A Virgin with the Electric Yankee mare. The trainer brought him home and began working with the colt for the 2016 racing season. The relationship wasn’t always easy.

“We battled early on. He’s like my little grandson; always ornery,” said the trainer. “He was the kind of colt that would bite you, you’d slap him, and he’d come back and do it again to see if he could get away with it. I would walk him out of the barn and he’d stand up on his hind legs and look around. He loves to play.”

Eash is accustomed to bringing horses home from the sales and gelding them right away. With Beckhams Z Tam, he resisted with the athletic colt. He just felt the pacer was different, and as a freshman, he showed he had ability. Making six trips behind the starting gate in 2016, Beckhams Z Tam registered three runner-up performances, two coming in $75,000 Indiana Sires Stakes finals. The colt’s fastest clocking was a 1:52.4 mile with a :26.2 last quarter. But Eash noticed something wasn’t quite right with his charge and, after consulting the owner, decided to turn him out in late August with $47,699 on his card.

“I could see there was something wrong with immaturity,” the trainer said. “He raced fairly good, but he struggled in the turn. I could tell at high speed something was bugging him. I had him scanned and they just couldn’t find anything. I told the owner, ‘Let’s turn him out. We’re going to have a lot of fun with him next year.’”

Over the winter, Eash staked Beckhams Z Tam to open stakes at Hoosier Park including the Monument Circle and Jenna’s Beach Boy. He also staked the colt to the Breeders Crown and Pepsi North America Cup. He also struck up an agreement with fellow trainer Jamie Macomber where Eash would prep babies and send them to her when ready. It also meant that Macomber would campaign Beckhams Z Tam this season. For Eash, it was tough to see the colt go, but he knew the pacer was in good hands.

“Wilbur would tell me, ‘You’ve got a good three-year-old coming. He’s special,’” said Macomber, “Wilbur always saw the speed. I didn’t sit behind him, but I heard about him. When I talked to Wilbur, he was always talking about Beckham.”

Macomber was warned of Beckham Z Tam’s tactics, and early on, experienced them herself. Eash had spoken of “Beckham Talks” where he worked with his precocious charge. Over time, the two gained a mutual respect, and Macomber began working on the same.

“I quickly learned what these Beckham talks were all about. He tested me. He’s still testing me,” Macomber said after having the colt for a couple of weeks. “We love Beckham; he’s a dream come true. We just hope he lives up to our expectations.”

While he is spirited off the track, when he lines up for battle, Beckham Z Tam has been flawless in 2017. In four starts, the sophomore has accumulated four victories, each time pacing in under 1:53. His latest win, coming on June 2, was a 1:51 effort where he won by more than four lengths. He was steered to victory by Macomber’s husband, Ricky, the colt’s driver since his freshman season. The triumph came on the same night as the first $75,000 Indiana Sires Stakes final, which the colt missed due to sickness in the elimination round. Beckham Z Tam’s effort was comparable to that of final winner Rock N Tony (1:51.1) and consolation winner Meadowbrook Tiger (1:50.4).

“He was very impressive in his first start coming off sickness,” Eash said. “We had already talked about not going. We would have liked to see a 1:50 mile, but he showed enough. He had to race like he did.”

Macomber was set on not shipping north of the border after Beckham Z Tam missed the first leg of Indiana Sires Stakes action. Only racing in overnights against lesser competition, she wanted a test for the colt to see how he would stack up against tougher horses. After his latest win, and how he trained in the days afterward, it was an easy choice.

“I wanted to see him fight. I wanted to see him look another colt in the eye. I had my mind made up we’re not taking him,” she explained. “We were walking back to the paddock and Ricky said, ‘I think we should take him. He did that on his own tonight.’”

Beckham Z Tam was one of 25 sophomores entered, and he drew into the second of Saturday’s three eliminations at Mohawk that includes Dan Patch Award winner Huntsville. It will be a step up for the Indiana-sired colt, but Eash is excited at the prospects. He’s like a proud grandfather hoping for the best.

“I want to see him get to three quarters a little faster and then let him come home,” Eash said. “He knows what to do after that.”

Ricky will guide Beckham Z Tam from post three in the elimination. Huntsville starts to the inside in post two. Macomber likes the post position and the fact that Beckham Z Tam races on Hoosier Park’s seven-eighths configuration, the same as Mohawk.

“I love the three hole. I don’t think we could have asked for a better post position,” Macomber said. “We’ll learn a lot Saturday. Every time we’ve raced him, he’s given 100 per cent. I don’t think he’ll disappoint us.”