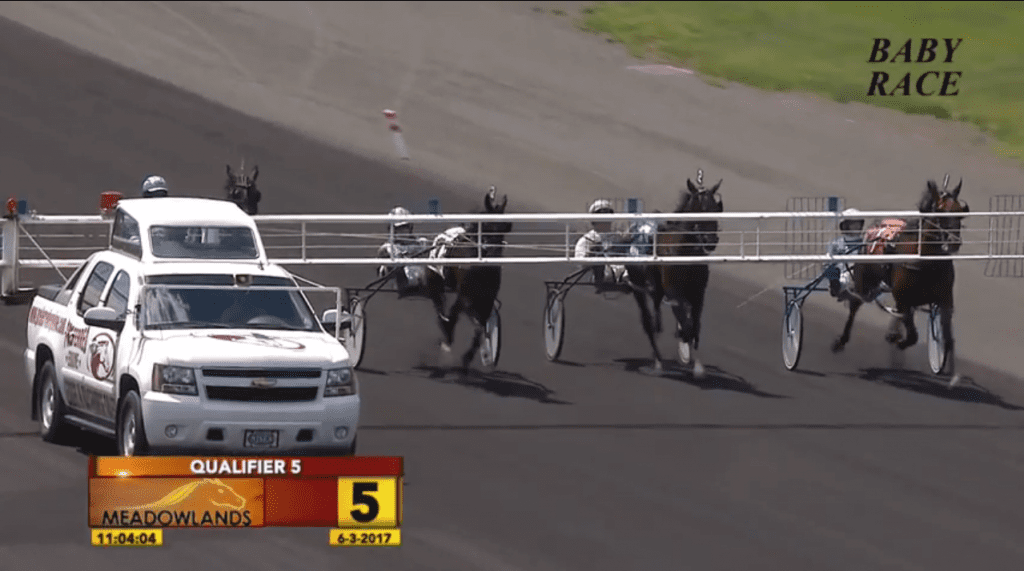 In a sport where hope springs eternal at this time of year with the babies appearing for the first time on the track, barns are filled with hope, anticipation and in some cases hyperbole.

It’s rare, however, for industry heavyweights like Murray Brown – a.k.a. “The Curmudgeon” — and Bob Marks to heap praise on a young racehorse this early and one two-year-old filly’s performance at The Meadowlands yesterday morning had them and others taking notice and Brown was quick to get on Facebook to start the buzz.

“I saw as impressive a 2YO first time starter as I’ve ever seen this morning,” Brown wrote. “Her name is Rainbow Room. She is by Somebeachsomewhere and out of the great Rainbow Blue. She won in 1.55, last quarter in :27.2 on cruise control. If nothing unforeseen occurs, you will hear from her.”

While Rainbow Room’s wire-to-wire win in her first qualifier was uneventful – she led through fractions of :29.4 / :59 / 1:27.2 before kicking home in :27.3 for driver David Miller – it was the way she did it that had Brown, Marks and others taking notice.

Indeed, Rainbow Room has the bloodlines to be a top filly. She is the product of two of the greatest racehorses in the sport’s history who, combined, won 50 of 53 starts and earned a shade under $5 million.

Rainbow Room – when she starts for a purse – will be the sixth foal out of her Hall of Fame dam to race. To date, her most notable performer on the track has been Rainbow Room’s full-sister Somewherovrarainbow. She earned more than $1.3 million while taking 20 wins from 46 starts. Among those 20 wins were victories in the Breeders Crown at Woodbine at two and the Blue Chip Matchmaker series final at Yonkers at four. She also took her lifetime mark at four racing in the Mares Preferred at Pocono where she paced the mile in 1:48 flat.

Rainbow Room was bred in Pennsylvania by Vieux Carre Farms (of Gettysburg, PA) and Steve Jones of Montgomery, NY. She was bought for $100,000 at Harrisburg by current trainer Joe Holloway and she is now owned by Crawford Farms, Vieux Carre Farms and Ted Gewertz.

Michelle Crawford says the acquisition of Rainbow Room fills a bit of a void after they had to retire her full-sister, Blue Beach, who went for $270,000 at the 2015 Lexington sale. “Blue Beach had a major breathing problem that wasn’t corrected after surgery, so we bred her and she is in foal to Always B Miki,” Crawford said. “We are glad Joe asked us (to buy in). She’s special. It’s not often Joe gets giddy about anything.”

Based on the reaction of several respected people from the industry based on only one baby race, it appears that Holloway has good reason to be giddy and this isn’t likely to be the last buzz created by Rainbow Room.