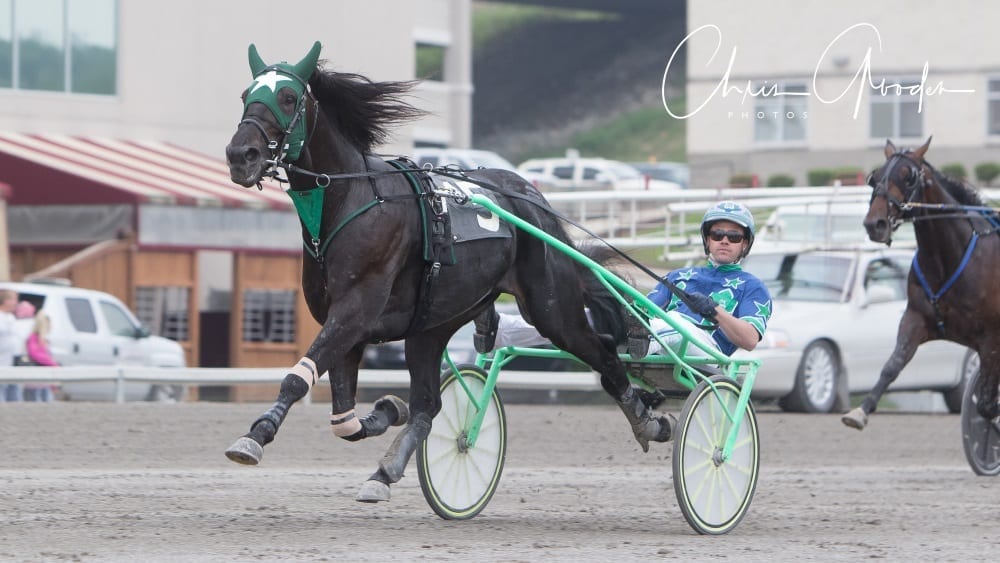 Despite having to race without his Cornell Collar at The Meadows, the Hambletonian hopeful posted the fastest victory by a sophomore trotting colt so far this year on a five-eighths mile track.

by Evan Pattak / The Meadows and Ken Weingartner / HRC

The Hambletonian hopeful, one of the most promising freshmen of 2016, had been racing with a Cornell Collar to help his breathing. Moments before Saturday’s race, however, trainer Noel Daley was informed that Cornell Collars can’t be used in Pennsylvania, and the device had to be removed.

It didn’t seem to bother Sortie, who raced beautifully in his seasonal debut, jogging off to victory for Andrew McCarthy in 1:53.1, fastest this year for a 3-year-old colt on a five-eighths-mile track and a life mark. The event known as the Super Bowl was contested over three divisions, with Andy M and Common Parlance also taking splits.

Daley said he added the Cornell Collar for Sortie, who won a Breeders Crown elimination and finished third in the final, after a vet’s diagnosis.

“They said everything looked good on him, he just had a short epiglottis,” Daley said. “So rather than do surgery, we just put the Cornell Collar on him. I didn’t realize until five minutes before he raced that they’re illegal here.

“I did an interview the other day where I mentioned the collar — I guess that’s how they knew we used it. I have to watch what I say to you fellas.”

In the Super Bowl, the son of Explosive Matter—Win B moved first over from third and drew off smartly, downing Giveitgasandgo by 3-1/2 lengths. High Glider was third. McCarthy indicated Sortie did not experience labored or noisy breathing during the race.

Last year, Sortie went off stride in three of his first four starts (he won the only race in which he did not) before starting to put it all together. He finished fourth in a division of the International Stallion and then hit the board in his final three races of the campaign. For the year, he finished with $122,055 in purses from eight starts.

“He always showed talent, but he would throw his head or when you pulled him off a horse he just wanted to go a hundred (miles per hour),” Daley said about last year’s breaks.

Sortie prepped for his seasonal debut by winning two qualifiers, one at the Meadowlands and the other at Harrah’s Philadelphia. Daley said the horse will stay near his base in central New Jersey as he works toward the $1 million Hambletonian on Aug. 5 at the Meadowlands.

“We’ll try not to overdo it,” Daley said. “It’s a heavy schedule; I don’t want him to be in everything. I’d rather keep him here. He can go (to Canada) later. If he’s good enough, he’s got everything late. I don’t want to have too many tough trips when we’re just trying to get him set up.”

The early favorite for the Hambletonian is Linda Toscano-trained New York-bred Walner, who won seven of eight starts last year and received the Dan Patch Award for best 2-year-old male trotter. Walner won each of his races by at least one-and-three-quarter lengths, including a four-and-a-half-length triumph in the Breeders Crown.

“Linda’s horse is obviously the horse to beat, but I legitimately think that if (Sortie) can breathe he’s a top five horse, definitely,” Daley said. “After Linda’s horse, there’s no one else I’d swap him for. We’ll see. It depends who steps up. He’s got to step up and do it now.”

In other PASS divisions Saturday… Andy M pulled the pocket down the backside for Aaron Merriman and quickly put away the leader, Monteverdi. Though he tired late, the son of Andover Hall—All In The Muscles held off Gustavo Fring by a half-length in a career-fastest 1:54.1, with Stealth Hanover fourth-placed-third.

“I didn’t want to have to race him that hard,” Merriman said, “but this horse really impressed me today. I never got the plugs out. He was getting a little bit tired late, but he’s supposed to. That’s as fast as he’s ever been by a couple seconds.”

Common Parlance performed well in the PA Stallion Series at 2, but this was his first shot at the big boys. After grabbing the early lead and enduring a slight shuffle, he poured through the Lightning Lane to score for Mike Wilder in a career-fastest 1:54.4. Brown Bear was second, two-and-a-quarter lengths back, while Brand New Key completed the ticket.

“We’ll keep going with him in this series,” said Joseph Skowyra, who trains the Crazed—Angevine gelding for Wade Wyatt and Francis DiMondi, Jr. “He’s a nice, sound horse, well behaved, and he’s fast.”