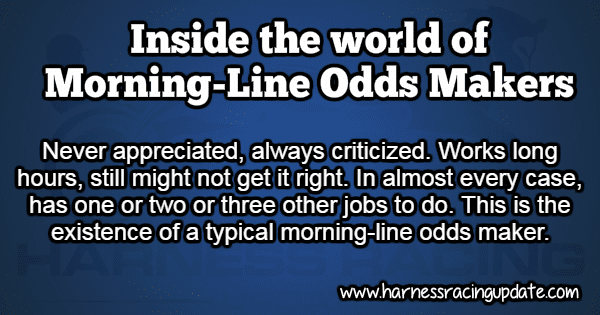 Inside the world of Morning-Line Odds Makers

The job nobody (but us) wants.

Never appreciated, always criticized. Works long hours, still might not get it right. In almost every case, has one or two or three other jobs to do. This is the existence of a typical morning-line odds maker.

I can speak of this from first-hand experience as I was the interim odds maker at the Meadowlands for the track’s Championship Meeting last year.

It was a bumpy ride, to be sure. Good thing I’m old and don’t do the Twitter thing. According to my friend Justin Horowitz, whom I spend most Friday evenings with in the press box at the Meadowlands, there was plenty of commentary in the Twitterverse about little ‘ol me during my first month on the job. And it wasn’t to compliment me on the splendid tie I was wearing.

I’d been a public handicapper for 30 years on the New York tabloid scene. No one on this earth has made more win bets on favorites than me— or given out more chalk as a public handicapper. I surmised that figuring out who would go off as the favorite would be easy based on my experience at work and the windows. I was wrong. And when I was wrong, I heard about it.

“I’ve never, ever, ever received an email, a phone message, and nowadays, a tweet or a Facebook message saying, ‘Hey, great morning line,’” said Dave Brower, who, after doing the ML at the Big M from 1996-2011, is back for a second go round, which began a week ago today. “I have, however, received complaining phone calls. Also, people would come up to me in the clubhouse to tell me, ‘Hey, you screwed up that morning line last night.’ But that’s the nature of the game. If you want the job, that’s part of it. It’s a thankless pursuit. Look at poor Mike Battaglia. When he does the Kentucky Derby morning line, immediately a million people want to criticize it. I hope I never have to do a 20-horse harness field. I had enough trouble with a 12-horse field in the (May 6) Cutler.”

Darin Zoccali did the morning-line at the Big M (in addition to several other jobs, including Director of Racing Operations) from the time of Brower’s departure until January of 2016 and now serves as the National Key Accounts Manager for Betfair/TVG.

“It’s a job nobody ever thanks you for,” said Zoccali. “It comes with the territory.”

His main responsibility was to serve as race caller at Tioga Downs, but James Witherite wore many hats while being part of the Meadowlands team until leaving to become the Program Editor/Chart Caller at Harrah’s Philadelphia last month. He, too, did morning-line duty at the Big M.

“The positive feedback I got (he actually got some!) came around the Breeders Crown,” said Witherite. “And it came from a fellow odds maker. As far as the general public, the positive feedback I got seldom centered on the morning line, but rather the written word when writing the comments in the program. Doing the morning line is a thankless job.”

With Brower it appears the Big M now has someone doing the job — a job that demands consistency and longevity — in place for the foreseeable future.

“There are very few people that can do the job well,” said Brower. “And you can’t pay them five dollars a day. You have to pay them what they are worth, and if you don’t, they won’t do the job and you are going to suffer in the long run because players are going to get mad along the way and not play your races because they think they are getting cheated.”

“You need that week in, week out consistency of seeing what trainers are doing and what horses got locked in or which horse is going from driver ‘A’ to driver ‘B’,” said Zoccali. “Getting used to trends, being able to do that on a consistent basis, that’s key. If you are not playing close enough attention, you can miss those things.”

“The punter wants to know what he gets,” said Witherite. “When odds makers change, he has to change.”

When I did the morning line, I used a style that my friend Stan Freedman, who did the line in Delaware for many years, used. It was a graded handicap. It was the best way for me to use what I thought was my strength. Figuring out whom was better than whom. Grade the field from top to bottom, assign the odds accordingly. My line improved incrementally with each passing month (the Twitterverse complaints dwindled! At least, that’s what Justin told me), but I was done after four-and-a-half months. As with most pursuits, there was no teacher like the lessons learned from experience.

I also found the trolls to be fickle.

But. There is one fact that is indisputable: Morning-line odds making and on-the-track performance have nothing to do with one another. The odds maker’s job is to predict the final ODDS, not predict WINNERS. He might have both jobs, but must segregate the two.

Brower did well out of the gate, correctly predicting 17 favorites from last weekend’s 21 races (81 per cent). He thought he did well, but, like all ML odds makers, still had some angst. “I thought I had two glaring errors,” said Brower. “I had Keenan wrong, at 15-1 (he went off at 2-1 on Friday and finished second). If I had him at 8-1, it would not have been so bad. Iammrbrightside N, I had him wrong. My qualifier note said he was not that good.” Brower had that one at 15-1. He went off at 9-2 on Saturday and won. It should be noted that he had the correct favorite in both races.

I’d like to have another chance at odds making down the road. I’ve always been good with numbers. If that makes me crazy, fine. But you better order up some extra straitjackets.

Brower has already proven he wants more. He’s back after six years away (and claims to be “fresh off the layoff.”). And Zoccali and Witherite say they, too, would do it again.

“To me, doing the morning line was like doing the New York Times crossword puzzle,” said Zoccali. “Of all of the things I did at the Meadowlands, doing the line was my favorite.”

“Absolutely, I would do it again,” said Witherite. “It’s a challenge that I enjoy. It’s the toughest job in racing media. I think the Meadowlands morning line is the hardest to set in all of racing, and that includes thoroughbred racing.”

Wordsmith Witherite summed up the madness that is morning-line odds making this way: “It’s done subjectively, but judged objectively.”

For those lacking a pocket dictionary, he also offered a succinct description: “You handicap the handicappers.”