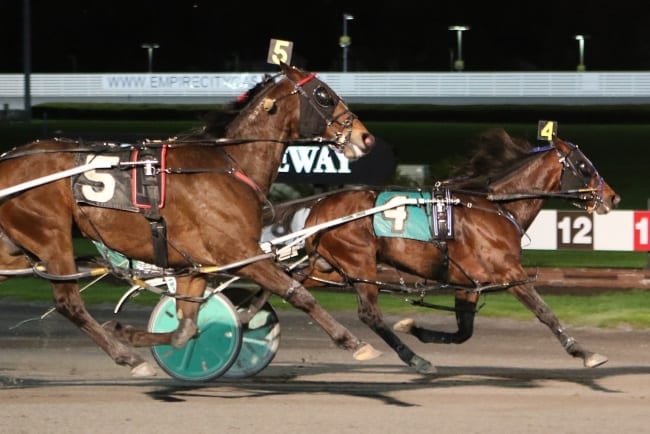 The sport’s richest race of the season to date again honored the memory of the Hall of Fame founder of Roosevelt Raceway.

At the outset of the 30th Levy, pole-sitting McWicked (Matt Kakaley) was — not surprisingly — put into play. He was joined by Keystone Velocity, who from post four, forged to the lead just after a spiffy :26.1, opening quarter-mile.

Somewhere in L A (Jason Bartlett), leaving right outside of Keystone Velocity, was caught three-wide and forced to wrangle back to fourth.

McWicked, who had retaken the lead in the second turn, found a :54.4 intermission before longshot Blood Brother (Brian Sears) moved from third. He uncoupled stablemate Somewhere in L A latched from second-over, with even-money choice Missile J (Tim Tetrick) and last season’s champion, Bit Of A Legend N (Jordan Stratton), at the back of that train.

McWicked maintained his advantage through a 1:22.3 intermission three-quarters (:27.4 third station), taking a tenuous lead into the lane.

However, his night was about to come to an unsatisfying conclusion. McWicked was done early off the final turn, but not before taking Keystone Velocity to the promised land of the passing lane. It was Keystone Velocity fighting off the race’s other tough mile, beating Somewhere in L A by a head in 1:51.2.

For Keystone Velocity, a 9-year-old son of Western Hanover—Venus Killean co-owned (as Allard Racing) by trainer Rene Allard, Kapildeo Singh, Earl Hill Jr and VIP Internet Stable, it was his third win (as the fifth choice) in seven seasonal starts. The exacta paid $135.50, the triple returned $593 and the superfecta paid $2,406.

“Rene (Allard) and I talked before the race and we decided we had to leave the gate,” Dube said. “I was just hoping Matt (Kakaley, with McWicked) could get me to the lane. My horse felt very strong, but I did see the other one (Somewhere in L A) coming.”

The driver/trainer combination was this race two seasons ago with Domethatagain, also with a two-hole trip.

Matchmaker to Mackenzie A

When the 92-year-old boss flies in from San Diego, you don’t want to disappoint him.

Sitting chilly from post four, Mackenzie A watched as Lispatty (Brian Sears) left hard from the pylons, with Shesjustadelight N (Ron Cushing) second and 9-10 choice Mach it a Par (Jason Bartlett) third… all three away in post position order.

Meanwhile, Regil Elektra (Yannick Gingras) and Bedroomconfessions (Scott Zeron) tried to leave, only to get parked for their troubles (the latter badly compromised by the former).

It was Lispatty leading at the :26.4 opening quarter-mile before Mach It A Par moved to take the baton approaching the :55.1 intermission. Down the backside, Shesjustadelight N took out of third, with Mackenzie A third and Medusa (Matt Kakaley) staying in.

Mach it a Par was seemingly in control in and out of a 1:23.4 three-quarters, with the uncovered rival pacing in place, forcing Mackenzie A wide.

It was Mach it a Par owning a length-and-half lead into the lane, but company was coming. Mackenzie A blew on by, widening to win the ninth Matchmaker by two-and-three-quarter lengths in a life-best 1:53.1. Medusa, who had left the cones, failed to match strides with the winner, but was a rallying second, with 81-1 rank outsider Diva’s Image (Joe Bongiorno) a closing third.

That one found her way into the final after original eight-holer Empress Deo came up ill. Mach It A Par faded to fourth, with Shesjustadelight N fifth and Lispatty, Regil Elektra and Bedroomconfessions bringing up the rear.

For co-second choice Mackenzie A, a 5-year-old Down Under daughter of Rock N Roll Heaven—Kept For Pleasure co-owned by the nonagenarian Harry von Knoblauch (a fine TV interview) and his daughter, Ellen Kinser, and trained by Peter Tritton, it was her second win in eight seasonal starts. The exacta paid $167, the triple returned $6,251 the superfecta paid $19,960 (base $2 payout).

“I thought I have to race her from off the pace,” Stratton said. “The trip worked out perfect for us. I knew there were horses behind and I wanted to move.”

Stratton won the inaugural edition of the race in 2009 with Pancleefandarpels.