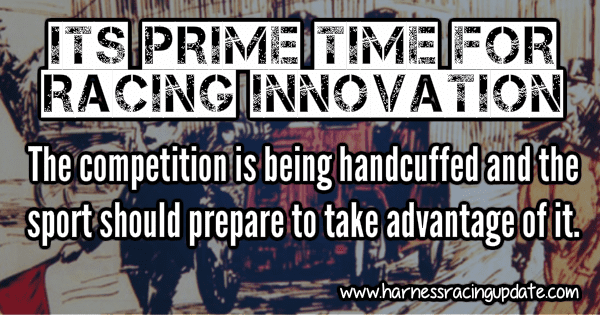 The competition is being handcuffed and the sport should prepare to take advantage of it.

In the 1860’s in the UK, innovators were working on a device that could propel a carriage without the use of a horse. It was the beginning stages of one of the most influential and important inventions in modern times — the motorized vehicle.

In the early days, though, these UK inventors came across a roadblock. There were people who liked things the way they were; because they owned the horses and the stagecoaches; shod the horses and built and serviced the stagecoaches. To push back against this new device, they used their connections to lobby for legislation to help their legacy businesses. In 1865, they were rewarded when ‘The Red Flag Traffic Laws’ were passed.

• Three people had to travel with the car. One had to drive, another had to walk in front of it waving a red flag to warn people they were coming, and the other had to, well, no one is really sure, but he had to be there.

• A whistle had to be affixed on the car, even though the whistle (curiously) “shall not be sounded for any reason whatsoever.” The vehicles had to have lights (not easy in the day), and the owner’s name and address had to be prominently displayed

These new rules worked as intended. The development and testing of this new vehicle wilted.

Meanwhile, in the relatively new and individualist country across the pond, Uncle Sam saw no reason to pass such laws. In 1896, when England repealed the Red Flag Laws, the combustion engine had already arrived. By 1915, Henry Ford’s new assembly line innovation allowed for a motor vehicle to be put together in 90 minutes flat. The rest, as they say, is history.

What do car laws in 1865 have to do with harness racing? I think, in this day and age, quite a bit. Allow me to explain.

Harness racing as a gambling game has been afforded some generous protections. In 2006, the Unlawful Internet Gaming Enforcement Act (UIGEA) was passed, which prohibited “gambling businesses from knowingly accepting payments in connection with the participation of another person in a bet or wager that involves the use of the Internet.” This law killed a lot of Internet gambling (especially online poker sites), but, as we all know, it left horse racing free to take bets over the web.

Since that time, harness racing (along with their thoroughbred cousins) has used this edge — Internet wagering has allowed us to wager and enjoy the sport from home, with 100 per cent legality. But far too often it has simply reshuffled the deck and market share has not increased.

Meanwhile, Daily Fantasy Sports – with demographics that hits racing right between the eyes – has boomed. It too had a grey area carve-out, and enterprising entrepreneurs took advantage of it. Back in 2010, the letters “DFS” were foreign to almost everyone. In 2016, these sites took in $3.4B in bets.

More recently, handle is growing leaps and bounds on something called ‘e-sports’. This may surprise some of you (I’m still having trouble getting my mind around it), but this involves wagering money on teams who play in video game tournaments. Yes, I typed that right. By 2020, some are predicting this wagering will reach upwards of $36B – about 300 per cent more than is currently wagered on all breeds of horse racing in North America. At the present time, most of this betting takes place offshore.

Maybe at this point you’re getting depressed. It seems there’s more competition for harness race wagering over the web, not less, despite the UIGEA. No, I’d argue that’s not the case, because we’re in the process of seeing more and more gambling regulation.

First, Attorney General Jeff Sessions appears to be leaning towards banning much of the Internet wagering we see today. 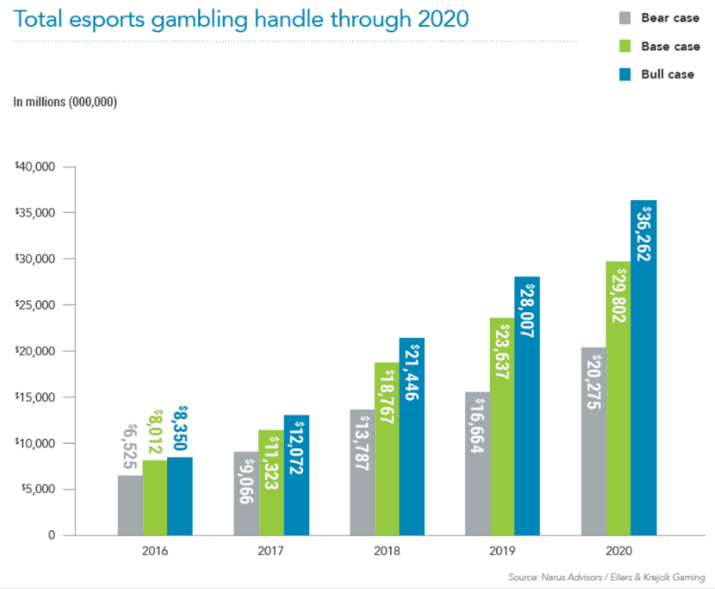 “Sessions indicated that as attorney general he would revisit and likely overturn a 2011 opinion by the agency that restored federal gambling law to Congress’ original intent and returned power to regulate intrastate gambling to the states,” an opinion piece in The Hill noted.

If this comes to fruition, it may mean that not only new betting games (like e-sports) will not be approved for wagering, but old ones will likely be curtailed, as well. The many states that run online bingo, online slots, or Internet poker could be prohibited from offering them. In addition, sports betting over the Internet (something pushed for by many of late) would not see the light of day. As we all know, rulings of this nature can get watered down, but I am certain racing won’t be affected, while others could be hampered, in at least some way.

If Mr. Sessions’ signalling is legitimate, more protection for harness racing wagering will be happening soon. But for some of the sports’ main competitors, they’re already in the throes of a similar fate, no matter what the Attorney General’s office does.

Ronald Reagan once said, “if you invent a better mousetrap, the government comes along with a better mouse,” and those words are prescient when it comes to Daily Fantasy Sports. State taxes and regulation have helped stop the DFS beast right in its tracks. Just two short years ago there were 118 companies in the space; now 81 have left, leaving only a select few. The list is likely to grow smaller because states have begun to ask for hefty fees which smaller companies cannot afford.

Ryan Huss, co-founder of Syde Fantasy Sports, told the Denver Post when announcing his company was folding its tent, “the fees seem like more of a deterrent than anything else. Only the largest operators can truly afford to pay them.”

In the DFS world, takeout has gone up while customer choice has gone down. The two main DFS behemoths, Draft Kings and Fanduel, (in what the Economist described as “a deal borne more out of weakness than strength”) have begun to merge. This once vibrant Internet business that was detrimentally affecting state lottery revenue in 2015 is turning into an old life cycle oligopoly. Any way you slice it, its hyper-growth days are clearly in the past.

Internet gambling in the early 21st century is right in the middle of their very own Red Flag Laws. Betting racing over the Internet, however, hums along, with little interference. It’s the stagecoach operator, the farrier, the old, protected guard.

This is why, in my view, there’s no better time to create a harness racing web business that can take advantage of this serendipitous edge.

What new bets and mediums can be offered, and what new avenues to wager can be exploited?

Because harness racing is protected, can it use its edge and partner to legally offer games that others can’t?

What investment can be made that can propel the sport into the gambling mainstream, to attract a skill game market, itching to play a gambling game over the net?

What can the sport do with its data to make the game more attractive to bettors who love models and statistics, like esports gamblers do? Or like blackjack players who use sophisticated analyzers to enjoy their craft?

What can the sport do to its rules to make it more palatable to bettors by creating a better on-track product?

What do harness racing destination sites say to a willing gambler? How can web properties across the sport (along with new ones created) be improved to speak their language?

What can harness racing do to differentiate itself from thoroughbred racing, to attract value conscious Internet bettors?

Betfair may be under pressure with new legislation and racing is a friend to them; what type of partnership can benefit both parties?

Is there anything that can be leveraged with international partners?

Back in 1865, stagecoach builders in the UK were in the catbird seat. They had a product people had to buy, and the government was taking care of the competition for them. They didn’t take advantage of it by partnering to build bumpers and fenders and oil pans, changing to a dealership model, moving from servicing large coaches to servicing engines. They just wanted to muddle along, hiding behind a set of laws; laws which would inevitably change. When that change came 30 years later, their fate was sealed.

Harness racing could choose that same path with the current and perhaps future protections it possesses; after all, the slot machines are spinning, and Twinspires and TVG are carrying the races from Northfield tomorrow. In the meantime, there may be a $500 billion skill game gambling market looking for something to patronize over the web. In my view it’s a perfect time for harness racing to modernize and modify their offering to provide them with a welcome place to land.