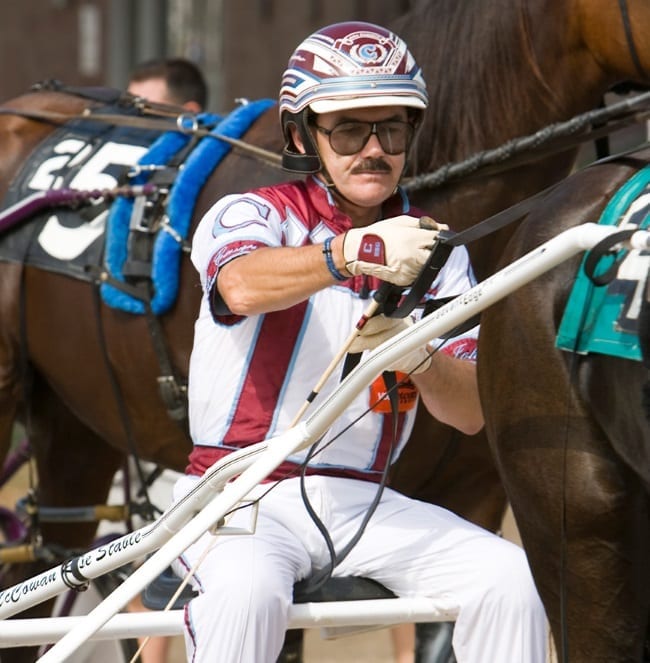 John Campbell turned 62 on Saturday (April 8). Let’s take a closer look at some of his career highlights.

He won the first New Jersey Classic in 1980 with Bold Rush. The $300,000 race was the biggest career win to that point in only Campbell’s second full season at the Meadowlands. He was 25.

He won seven straight drives on Feb. 3, 1983 at the Meadowlands during a driving rainstorm. Only two of the horses were favorites. His eighth scheduled drive — the aptly-named Rain In My Face — was scratched and Campbell finished second in the ninth race.

He won eight races on a single card at Freehold in October, 1986 — a track record that still stands.

On April 9, 1983, a day after his 28th birthday, Campbell beat Cam Fella at Freehold with Jefs Eternity. It was the only female horse ever beat the “Pacing Machine”. Plus, since Jefs Eternity also owned decisions over the 1981 HOY Fan Hanover, she thus became the only horse in the modern era to defeat consecutive Horses Of The Year — one male and one female.

Twice a winless horse for the year at age three still managed to be second in the Meadowlands Pace. At Point Blank in 1997 and Odds On Equuleus in 2013 both were driven by Campbell.

Only Campbell has gotten money with three fillies in the Meadowlands Hambletonian history: 1985 — 3rd with Britelite Lobell; 1989 — 3rd with Peace Corps and 1992 — 4th with favored Armbro Keepsake.

Sixteen times Campbell has won the Meadowlands driving title and 16 times he has won the national earnings title.

Campbell was involved in a dead heat in a Triple Crown race in 2004 when he tied with Timesareachanging (Ron Pierce) while driving Western Terror in the Cane Pace at Freehold.

Campbell’s 10,000th career win got lost in the spotlight of Somebeachsomewhere and Art Official in July 2008. Share The Delight won his elim and it was #10,000 for Campbell, who finished third in the epic final.

… that Campbell’s first Hambletonian drive came in the same year as Stanley Dancer’s last Hambletonian win? Campbell won his first assignment in the first heat with Joie De Vie and Dancer won the other two with Duenna, the first female to win the Hambletonian in New Jersey. It was also the sport’s first million-dollar trotting event ($1,080,000).

The first ‘catch-driver’ to ever win a million-dollar race was John Campbell in 1982 with Hilarion. But it took a pair of good strokes of fortune for this to happen. Campbell did not qualify for the final as his own colt, Merger, came up short. O’Donnell qualified two — Rompin Home and Hilarion. The “Magic Man’ chose Rompin Home (fifth) and the rest is history.