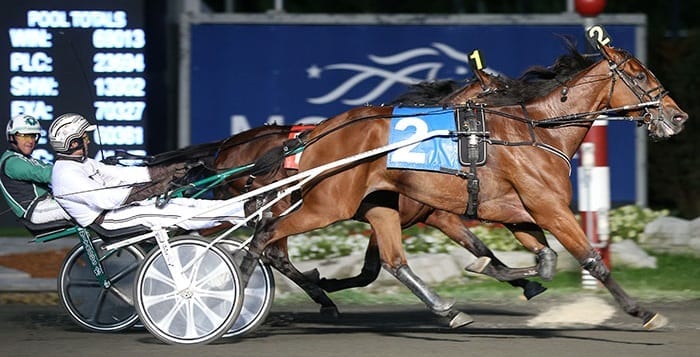 The Bee all and end all

As far as her high-powered owners are concerned, star mare Bee A Magician was the best trotter they have ever owned.

David McDuffee and Herb Liverman have owned a long list of star standardbreds in their time, but neither has owned a trotter better than mare Bee A Magician, who was retired from racing last week as the third richest North American trotter of all time with over $4 million earned.

“I’ve had a lot of good horses over the years and I could rattle off a few of them, like Magical Mike and Armbro Operative, Kadabra, Pizza Dolce, Poof Shes Gone and Spider Blue Chip and on and on,” said McDuffee of Delray Beach, FL, who also shares the trotter’s ownership with Mel Hartman of Ottawa. “All of these nice horses and I this week I thought, ‘You know what? I’ve been pretty damn lucky.’ But Bee A Magician is not just a good horse. She is a great horse. I realize now that it’s a level way beyond those other horses… and I certainly don’t want to make them less than they were, because they were very, very, very nice horses, but Bee was special.

“She was just unbelievable. First of all, she was Horse of the Year (in 2013), undefeated, set a world record (1:51), track records, earned four-plus million dollars. I’ve never been so blessed and so lucky to have her.”

Bee A Magician not only retires as the second richest Canadian-sired standardbred of all time — behind only gelded trotter and Balanced Image son Arch Madness ($4,328,091) — the Ontario-sired daughter of Kadabra out of the Balanced Image mare Beehive ranks fifth in career earnings among North American standardbreds when trotters and pacers are combined.

“Last year she was off five months and she was swimming to stay in shape after the problem with her leg. This year, we knew it would be five months and we would start racing at the end of the racing season,” said Liverman, a native of Montreal who now lives in Miami Beach, FL.

Bee A Magician, who was trained by New Jersey-based Richard “Nifty” Norman, is now seven and Liverman said it didn’t make much sense to put her through that long a period of rehabilitation and miss much of this year’s racing season. He said the owners made the decision to retire her on Wednesday (March 21) and she was bred to Muscle Hill, the top trotting stallion in North America, by Friday.

“Most of these great mares don’t turn out to be great producers. They’ve been raced hard, but I really believe that Bee A Magician will produce good horses. I said that for a number of reasons. First, she is a magnificent specimen. She’s just big and powerful and the make-up is incredible,” McDuffee said. “In my heart of hearts, I really believe we will end up with some nice foals out of this mare.”

It will be a few years before we know, for sure. So, for the moment, her owners are content to reminisce about Bee A Magician as a racehorse.

Liverman said he’s been fortunate to have owned “some terrific horses, but as far as trotting goes, she’s the best. Kadabra and Muscles Yankee were very good, but I think she was the best of the trotters that I owned.

“I’ve never had one go this long, five years as a champion, that’s for sure… She was fantastic.”

A sure-fire Hall of Famer in both Canada and the United States, Bee A Magician checks off three of the four criteria for entry into the U.S. hall as a racehorse — and meeting just one criteria is enough for induction.

Bee A Magician has had an undefeated season of 12 or more races (2013’s 17-for-17 campaign), earned over $3 million lifetime ($4,055,865 to be exact) and been named Horse of the Year both in Canada and the United States (2013). The only criteria she missed on the list is winning 75 per cent, or more, of her lifetime starts. It is impressive that she won 62.5 per cent of her races (45 for 72) over five racing seasons considering almost all of her starts were against stakes competition across North America and some included taking on the best older male trotters.

“She had 45 wins in five years and she raced against males a lot of the time,” Liverman said, adding that even in 2016, after coming back from injury, Bee A Magician was only worse than second one time in seven starts.

Shortly before Bee A Magician defeated the boys in the 2015 Maple Leaf Trot at Mohawk, Hartman said, “Honestly, every day I think about her I have to pinch myself that I own a horse like that. She’s just one hell of an athlete. She knows how to take care of herself and she’s really something special… I can’t say enough about her. She’s just a special, special horse. It’s more than a once-in-a-lifetime dream. It’s an honour to own a piece of her.”

“Brian Sears drove her (in the U.S.) and drove her just about 100 per cent perfectly,” McDuffee added. “(Rick) Zeron did such a great job driving her up in Canada. Every time I see one of the CDs with her races, every race was exciting with her. Just so special.”

Despite owning a string of champions, Liverman said he has only owned one other horse that compares with Bee A Magician — a pacing filly named Handle With Care that was undefeated in 17 starts as a two-year-old in 1973 and extended that skein to 24 wins before tasting defeat for the first time at three. She earned about $800,000 by the time she retired at five and twice was named Canada’s horse of the year.

Though the owners were hoping for one and, perhaps, two more racing seasons, they said they didn’t hesitate to retire her when informed of her injury.

“She doesn’t owe us anything. We owe her quite a bit,” McDuffee said.

Yet, another talented young Kadabra-sired trotting filly may just help fill the void. Bee A Magician’s three owners — with the addition of Jeff Gural, the owner of the Meadowlands Racetrack, Vernon Downs and Tioga Downs — have a talented three-year-old trotting filly named Magic Presto who earned $393,049 in her freshman year with a record of 4-2-1 in nine starts that concluded with a victory in the $447,000 Goldsmith Maid at Woodbine.

“(Magic Presto) and Bee A Magician were turned out in November or December at Carter Duer’s in Kentucky,” Liverman said. “Carter has been in this business longer than me and has the best eye for a horse of anyone I’ve ever met. He goes into the field and the two of them are together in the same field. He knows ever horse by sight, he doesn’t need name or halter tags, and he said until both heads were looking straight at him there was zero difference in conformation, in color, in everything. A couple more white hairs in Magic Presto, possibly, on the forehead. Otherwise, he could not tell, and he could tell every other horse from 25 yards away.”

“He said, ‘God Almighty, I haven’t had two better looking horses on my farm than those two,’” McDuffee added.
Norman is also training Magic Presto, so the owners are hoping for a little déjà-vu.
“She is physically almost a carbon copy of Bee – a big, strong thing. She went through some sickness at the end of last year, which really cost us some true recognition, but she got back for the Goldsmith Maid and looked pretty good there. Nifty tells me she’s training well. So, we’ll keep our fingers crossed,” McDuffee said.

“It wouldn’t be fair to think that any three-year-old was going to be another Bee A Magician, but I’d settle for something a little bit below that.”