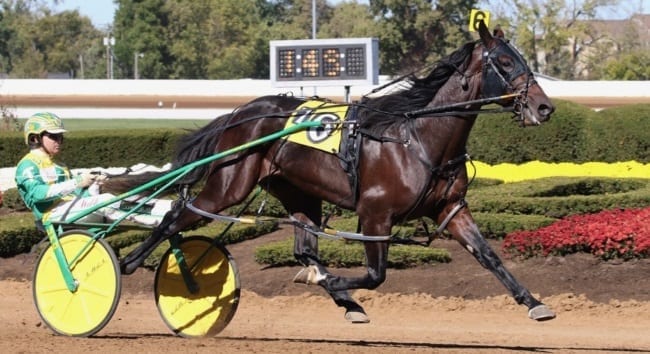 The top freshman pacing colts from 2016 are also expected to do battle with O’Brien Award winner Beyond Delight and others in this year’s biggest sophomore stakes.

Let’s get ready to rumble.

Huntsville and Downbytheseaside will renew their rivalry during the 2017 season in the always talent-laden three-year-old colt pacing division.

A year ago, during their respective two-year-old campaigns, each made a major impact. Huntsville (Somebeachsomewhere—Wild West Show—Western Hanover) won the Breeders Crown and Pennsylvania Sire Stakes Championship as he amassed seven wins in 11 seasonal starts, earning a division-best $689,814, on the way to being named the winner of the Dan Patch Award for freshmen colt pacers.

Downbytheseaside (Somebeachsomewhere—Sprig Hanover—Allamerican Native) upset his main foe in the Governor’s Cup, winning by three-and-a-quarter lengths in what would be the season finale for both. He won eight of 13 and earned $577,106.

While Huntsville deservedly enters this season as the one to knock off the top of the mountain, the tale of the tape reveals a matchup that could go either way as both had identical lifetime-best clockings of 1:49. Neither failed to hit the board during 2016, and furthermore, Huntsville lost four times a year ago, two of those to Downbytheseaside, who lost five times, three of those at the hands of Huntsville.

This pairing is sure to provide much drama during 2017, as both gear up for the long road ahead.

“I rode him a little bit through the winter,” said Ray Schnittker of his trainee, Huntsville. “I like doing that because it’s something different. I’ve had good luck doing it. I trained him in two minutes the other day, so he’s getting pretty close to going.”

Huntsville is a big colt, and Schnittker hopes that turns out to be an advantage. “He’s 16-1 and 1,300 pounds. Most standardbreds are around 15-2, so he’s definitely on the higher end. I like big. Usually, they don’t get worn down too quickly.”

The schedule is typical for a horse of Huntsville’s caliber, with one big exception. “Meadowlands Pace and North America Cup mainly, the Breeders Crown is definitely on the table, maybe the Cane Pace,” Schnittker said, “but I don’t put anything in the (Little Brown) Jug. I think the heat stuff is stupid.”

So when can racing fans look for Huntsville on the track?

“Right around the first of May he’ll qualify at the Meadowlands or Pocono, I’m not quite sure which,” said Schnittker. “I’m just hoping he stays sound and I can get a whole year out of him. That would be a lot of fun.”

Trainer Brian Brown would love to have some fun, as well. He figures to with Downbytheseaside in his barn. His student’s biggest win of the year came in the Governor’s Cup after making an equipment change, suggested by 2016 United States Harness Writers Association Driver of the Year David Miller.

“I wanted to use a hood with holes,” said Brown. “But when we went to Woodbine (for the Governor’s Cup), David suggested an open bridle. It calmed the horse down the first day I put it on him. I think it gives him more pace late in the mile and makes him more manageable.”

Brown turned his colt out when he got to Florida for the winter in late November, but Downbytheseaside did not do well, so Brown brought him in January 1, when training began.

“He’d been losing weight,” said Brown. “But after I brought him in, he started putting weight on. He relaxed more. I’ve been down to 2:08 to 2:10 with him. I’m going to train him in 2:02 or 2:03 soon. We’ll qualify in the middle of April and then we’ll see after his second qualifier about the first Pennsylvania Sire Stakes race (slated for May 6), maybe that will be his first start. It just depends on him.”

So, is Downbytheseaside, who has the typical Meadowlands Pace, NA Cup and Little Brown Jug on his dance card, the top gun in the division?

“I’m not going to say who is the better horse,” said Brown, who then gave props to his rival. “To me, Huntsville is the horse to beat.”

Tony O’Sullivan trains a colt who could have a say in the 2017 major stakes picture. His Beyond Delight (Bettor’s Delight—Outtathisworld—Rocknroll Hanover) only faced Huntsville and Downbytheseaside once during an 11-start freshmen year (finishing seventh in a leg of the PaSS).

He took away the hardware that is Canada’s O’Brien Award as the top two-year-colt in Canada on the strength of winning the Metro in 1:51.3 after surging up three-wide at the three-quarters. He won three times during the year and amassed $327,391 in earnings.

“It was pretty surreal,” said O’Sullivan of winning Ontario’s top freshmen colt pace. “It was really exciting. I was very proud of my staff.”

Compared to his two headline-grabbing rivals, Beyond Delight may be a bit behind.

“He’s doing good,” said O’Sullivan. “We struggled with the weather up here (in Ontario) this winter. It’s been a little too warm. The frost is coming out of the track a little bit earlier and a little bit quicker than usual. It’s hard to have a training schedule when you have three inches of rain one day and it’s minus 20 the next.”

“I’ve tried training him in a bridle where he can see a little bit more,” said O’Sullivan. “I believe horses should learn to go with as little gear as possible. As they mature, they should see a little more.”

O’Sullivan listed the NA Cup, Meadowlands Pace, Somebeachsomewhere and Hempt as some of the races his colt will enter. Sullivan said he thinks his colt is not eligible to the Little Brown Jug.

The trainer would like to continue prepping for the season ahead and keep his colt at Mohawk until the June 17 NA Cup, but may have to race in some preliminary Pennsylvania Sire Stakes legs in order to earn enough points to qualify for the final, which went for $252,000 last year.

“But the horse is here to make money and I have to consider what’s best for my owners,” said O’Sullivan, who is looking to have his horse debut at the Meadows on May 6. “That’s the aim. Hopefully, the weather does one thing or another up here and we can get on a better schedule.”