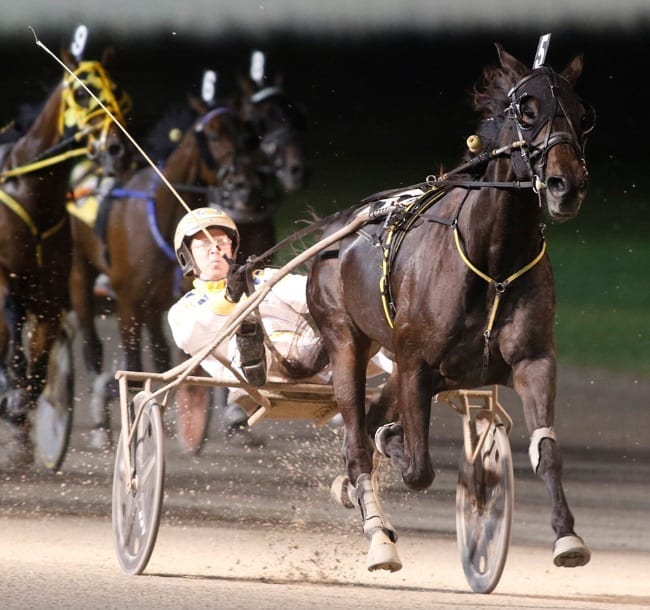 Obrigado, the Older Trotter of the Year, had a truly amazing season in 2016. The Maine-bred had seven wins on the year and all seven came at different tracks:

Get this, counting three victorious qualifiers, Obrigado won 10 times last year and, in all 10, a different horse was the runnerup, in order: Second Sister, Wind Of The North, Luminoisty, Il Sognos Dream, Natural Herbie, Muscle Up The Goal, Resolve, Centurion ATM, I C Caviar and Crazy Wow.

They nose the way to the money

Three times in 2016 the biggest purse of the year for one of the standout horses was won by a scant nose.

Control The Moment nosed out Racing Hill in the Meadowlands Pace.

Marion Marauder nosed out Southwind Frank in the Hambletonian.

Obrigado nosed out Crazy Wow in the TVG.

How competitive was the sophomore trotting colt division in 2016? Division winner and trotting Triple Crown champ Marion Marauder paid $18.40 and $15.20 in back-to-back races.
10 years ago…

2017 marks the 10th anniversary year of Tim Tetrick and George Teague, Jr teaming up to become the only driver/trainer tandem to win a million-dollar race on a half-mile track — the 2007 Rooney at Yonkers with Southwind Lynx. They Tetrick and Teague added the Meadowlands Pace to their bios. too.

Rainbow Blue was Horse of the Year in 2004 and went four-for-four in 2005 at age four, the year after she won the hardware.

Always B Miki was Horse of the Year in 2016 and went four-for-four in 2016 at age four, the year before he won the hardware.

Tim Tetrick joined John Campbell five years ago as drivers to win the Meadowlands Pace multiple times and the Hambletonian, too prior to age 35. Seems odd that this year Campbell, who is retiring, won’t be in either and Tetrick had both freshman division winning males in 2016 with Huntsville and Walner.

David Miller returns to the regular driving wars in 2017 as the:

1. Two-time reigning Driver Of The Year.
2. Person who has driven the fastest male and female horses ever.
3. Man who did not lose a race with last year’s sophomore pacer of the year Betting Line in nine starts.
4. Driver who owns the all-time fastest mile in two countries — 1:46 in the U.S. and 1:47 in Canada.
5. Person coming off his best season ever at age 52 — $12.5 million.
6. History’s all-time leader in 1:47 or faster miles.
Not bad for a guy who began the 21st century 48th on the all-time list of earners and is now about three months from surpassing Ron Pierce for the number two slot.