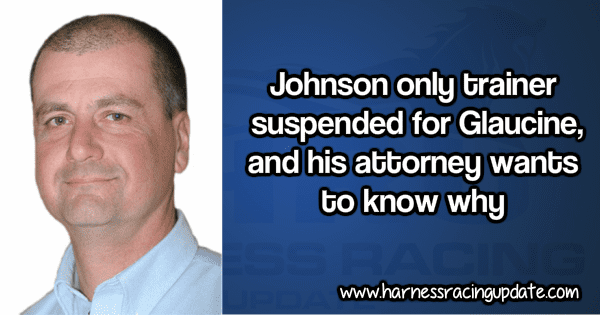 Johnson only trainer suspended for Glaucine, and his attorney wants to know why

Lawyer said the ruling relies on “voodoo science” and his client is being made a scapegoat for a rash of positives by a long list of trainers.

A rash of positives in 2016 for Glaucine caused obvious headaches for the regulatory arm of the racing industry, which was faced with dealing with a new drug that had never before come across its radar screen and quite likely was the result of environmental contamination. The New York Gaming Commission set out to tackle the problem and in February issued a set of guidelines and rulings. But at least one trainer and one attorney are anything but satisfied with the end results.

Of all the trainers who had Glaucine positives, a long list that includes prominent names such as Ron Burke, Julie Miller, Linda Toscano, Mark Ford and three thoroughbred trainers, only Richard Johnson has been issued a suspension. The reason he was singled out is that his horse, Rubber Duck, was the only one to test above a line drawn in the sand by the Gaming Commission: one nanogram per milliliter. Johnson’s attorney Drew Mollica said the ruling against his client was based on “voodoo science” and that his client was being made into a scapegoat.

“The only guy they’re going to hang is poor Richard Johnson,” Mollica said.

According to a New York Gaming Commission press release, Glaucine is a “potent drug with the potential to affect race performance” and it affects can include “anti-inflammatory, antitussive, bronchodilatory and hallucinogenic properties.” While that may seem to make Glaucine something trainers may be tempted to use to gain an edge, the Gaming Commission admitted that the drug “May be naturally found in wood shavings used to line horses’ stalls.”

The “was it environmental contamination or doping?” conundrum made the Glaucine cases anything but simple. The Gaming Commission’s way of dealing with the complexities of the issue was to establish three threshold levels when is came to meting out punishments.

No penalties were handed out for any horse testing under the level of 500 picograms per milliliter. Eleven of the 55 positive exceeded the next threshold, and those horses were disqualified and the purse money was forfeited. The final level was the one nanogram per milliliter mark, and the Johnson-trainee Rubber Duck was the only horse to test above that level. He did so twice.

Mollica said the Commission suspended Johnson for 75 days and fined him $3,000, but would reduce the penalties to 45 days and $1,500 if he did not appeal. Johnson has appealed.

“The Gaming Commission has said that we have, in conjunction with the Racing Medication and Testing Consortium, adopted a new rule, that based on our studies if you are over one nanongram the horses didn’t get this from contamination but was injected purposely,” Mollica said. “So with the other 54 guys they did nothing wrong and it was contamination, but not so with Richard Johnson and only Richard Johnson. They admit that Glaucine comes from wood chips and they say we studied the matter for years. Now, here’s where we draw the line and after the game of musical chairs the only guy left without a chair is Richard Johnson.”

Mollica will press forward with his case, which will begin with an appeal hearing before a Gaming Commission hearing officer. He said he will base his defense on his contention that there is no science behind the threshold levels or anything to back up what he sees as the random nature of drawing a line at one nanogram. He cites a legal term known as “the Frye standard,” which, he says, must be adhered to in court when the issue is the admissibility of scientific evidence. The Frye standard provides that expert opinion based on a scientific technique is admissible only where the technique is generally accepted as reliable in the relevant scientific community.

“The rule of law is when you promote science it can’t be voodoo, it can’t be joke science,” he said. “The New York Gaming Commission is saying that in conjunction with the RMTC we’ve now established these thresholds. But they don’t cite any science, any peer review science or any scientific tests approved by the scientific community.

“Richard Johnson is a scapegoat for what is clearly a problem they needed a way to get around. They had 55 positives, so what were they going to do, get rid of Burke, Ford, Julie Miller? You might as well just gut the sport.”

Johnson had two other horses, World Cup and Canbec Kingkazimir, test positive for Glaucine but they were under the one nanogram level.

It is rare for anyone challenging a Gaming Commission ruling to win on appeal. Mollica said that if his appeal fails he will take the matter to an appellate court.