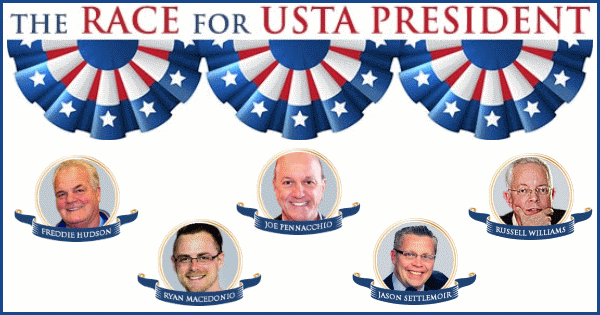 Last Sunday, Harness Racing Update (HRU) published a feature (full story here) in which the five candidates for the presidency of the United States Trotting Association (USTA) — Freddie Hudson, Ryan Macedonio, Joe Pennacchio, Jason Settlemoir and Russell Williams — were asked two additional questions by a reader as a follow-up to an original feature published Feb. 12 (full story here) in which they were each asked five questions about some of the most important issues facing the sport.

With regards to the follow-up story, HRU had the wrong email address for Hudson and he did not receive the two additional questions from HRU prior to publication. After that issue went to press, he did send answers to those questions that we posted on our Facebook page and are republished here.

1. It is very evident that sometime in the fairly near future that whipping will be an issue that the whole industry will have to confront. Do you support the current whipping rule? If not, what do you see as a rule that would be both acceptable to the industry and the public including the cruelty to animal groups?

“The current whipping rules vary from state to state. The public’s perception of the whipping is that it is abusive, so we must adopt a standardized policy and install strong deterrents and penalties for violations. I have been asked questions about whipping by many people – when we have to give explanations on a subject – it means we have problem and it needs to be addressed and fixed. As a former driver and trainer, I know the importance of having a whip – it is a tool of the trade. Many times you have to tap a horse to get his attention and to avoid dangerous situations and for those reasons I would not outlaw or ban whips altogether. What I would impose as a standard rule: during a race a driver would be required to keep both hands in front of him and in the handholds at all times. If a driver were to disregard this rule he would be given a monetary fine along with days. It is the one-handed, leaning out to the side whipping that is objectionable to fans and families. Whipping also encourages casinos to align with animal activists against us.”

2. It is also clear that the judges at several tracks do not know the rules, refuse to enforce the rules, or enforce them without any consistency. Do you think the USTA has a responsibility in this area and what would you do to standardize the rulings?

“It is a bigger problem than most might think. It has cost us fans. Some of the judges are not enforcing the rules because they feel the racing commissions and racetrack management will not back them. They also have a fear of a lawsuit against them by the person that committed the rule infraction. My policy would be for the judges to enforce the rules with an iron fist. Should we have a harness racing commissioner? My answer to that question is yes.”