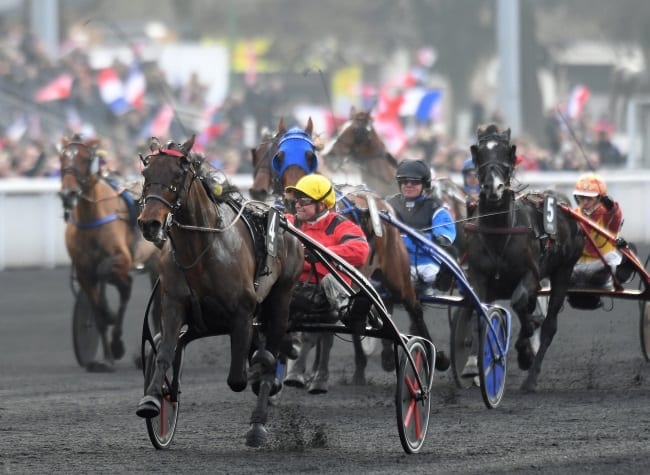 It seems nothing can stop the French favorite in the big races during the winter meeting in Paris.

Bold Eagle not only chases glory on the track, he is also poised to become one of the most memorable standardbreds of all time.

On Sunday morning in the €400,000 Prix de France at Vincennes Racetrack in Paris, the six-year-old son of Ready Cash out of the Love You mare Reethi Rah Jet was sent off as the heavy favorite and did not disappoint in the 2,100-metre event (about 1-5/16ths miles).

Franck Nivard, the dominant driver in the Paris area, settled Bold Eagle into a favorable location when the starting car accelerated as the machine-like Timoko and driver Björn Goop left quickly for the lead in the 14-horse field.

Sitting comfortably in third in the early going, Bold Eagle watched patiently as Un Mec d’Heripre took over the lead.

Nivard waited until a half-mile remained to make a three-wide attack with Bold Eagle and in the last turn there was no question about the outcome. Bold Eagle had plenty of power and Un Mec d’Heripre became easy bait in the stretch.

Bold Eagle’s margin of victory was three lengths and his winning time was a mile equivalent of approximately 1:54.

Behind Bold Eagle, Timoko raced well and caught the silver medal in safe distance in front of Voltigeur de Myrt in third.

It was a repeat victory in the Prix de France for Bold Eagle, trained by Sébastien Guarato, owned by Pierre Pilarski and bred by Jean-Étienne Dubois. The trotter’s connections earned €180,000 for the victory. It was Bold Eagle’s 32nd win in 37 career starts. His career earnings now sit at €2,923,300 (about $3.1 million U.S.).

It is expected Bold Eagle’s next start will be on Feb. 26 at Vincennes when he will attempt to win the French Triple Crown by contesting the €400,000 Prix de Paris.

A year ago, Bold Eagle was five when he won the first two legs of the French Triple Crown. Lionel was then too strong in the Prix de Paris — a marathon test contested over 4,150 metres (approximately 2-5/8ths miles) — but it would be surprising if Guarato does not try for redemption this year, especially with a €300,000 bonus up for grabs for the winner of the French Triple Crown.

All of which has France buzzing about Bold Eagle. The whole entourage around the champion horse and two-time winner of both Prix d’Amérique and Prix de France has really succeeded in marketing harness racing at home. Pilarski has become a well-known person in the industry and he’s not slow to praise both his own horse and many of the opponents before and after the races. Good words of horses and the sport are welcomed in Paris and Pilarski’s gentlemanly behavior is not difficult to embrace.

Meanwhile, it’s no secret Pilarski and Guarato have thoughts of going to Sweden and racing in The Elitlopp at the end of May. Different conditions are waiting for the French champion if he goes north, and harness racing fans all over the world can’t wait to see the son of Ready Cash tackling the task against the best sprinters in the sport.