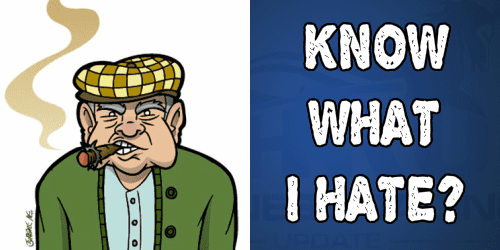 Know What I Hate? A load of super crap

The Super Bowl was great back when it used to be a football game.

Bernie setting out 30,000 calories on the coffee table, kids in their rooms and you and a few buddies having some beer and watching a pigskin classic.

That’s the way things used to be.

Now, all we’ve got is two weeks of nothing but talk leading up to the ‘big game’ where football seems to be an afterthought. Why in the heck do we need an eight-hour pre-game show?

Here’s what you need to know before the game: the New England Patriots are going to play the Atlanta Falcons on Feb. 5 around 6 p.m. in Houston. Both teams are good. There’s your pre-game update. And it took me 15 seconds.

Oh, I do like that Belichick, though. That young buck is my kind of sheriff – no use for fashion or pleasantries, just does his homework and eats everyone’s lunch. I read this week that he never told his kids whether he was right or left-handed because he didn’t want them to have an edge on him in backyard lacrosse games. That, my friends, is a winner.

After that pre-game garbage it’ll be five more hours for the game itself, once you consider all the commercials, big half-time show and those dreadful sideline people yammering on.

Cripes, Bernie can make a whole casserole in the time it takes someone to sing the national anthem nowadays. Not to mention the delay when whoever they’ve got passing for entertainment gets a little too frisky with the dry ice machine at the half and lets off a smoke bomb that fogs the field for the next half hour.

I hear this year it’s this dippy Lady Googoo Gaagaa and it’s not off the table that she might show up actually covered in pigskin.

I can’t be sitting around on the couch for 13 hours, not with my bursitis. May as well just supersoak me in Bengay and leave me to die.

Super Bowl the horse, bless his soul, would be ashamed to share a name with such a disgrace. When I think of Super Bowl, I think of the trotting Triple Crown, Stanley Dancer and being a great sire, not creepy talkin’ baby commercials or herding cats or some rattle-and-bang musician who never learned to use her inside voice.

My son Robbie was reading an article in his ESPN magazine the other day. It said that in an average 60-minute NFL game, there’s less than 13 minutes of game action since the clock runs between plays, during the huddle or whatever. Thirteen minutes! Even regular season games are a waste of time.

Here’s an idea. Let’s do my 15-second pre-game show, followed by singing the anthem straight up in 75 seconds — the way nature intended. Then we’ll do the whole game in 13 minutes, ditching the dead air, crappy commercials and the half-time show along the way.

The Super Bowl in less than 15 minutes? Why I won’t even need to run a hot bath.