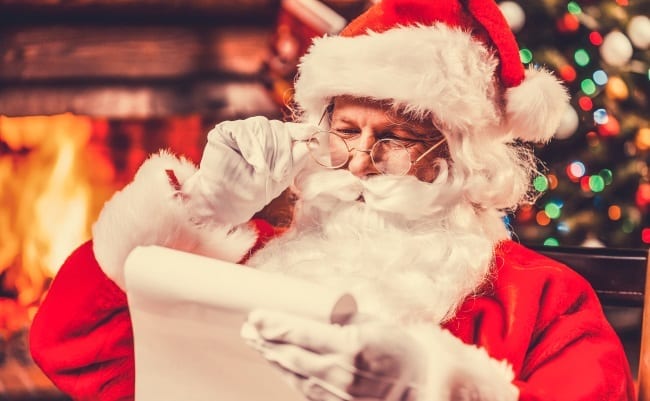 Thanks to a connection at the North Pole, the author managed to get his hands on some letters to Santa from some notable harness racing names.

Dear Santa,
There’s quite a bit of controversy over the legitimacy of the Pacing Triple Crown, but not so much on the trotting side. That Triple Crown hadn’t been won in a decade. I beat the next great trotting “superstar,” my paternal brother, Southwind Frank, twice that day. I overcame the tight turns and a feisty challenge from Smalltownthrowdown in the Yonkers Trot, and I took the Kentucky Futurity, again over Frank, from the tough 11 post as the third choice. Right to the end, the fans and bettors refused to accept me as the top dog in the division. One would expect serious Horse of the Year consideration for one of only nine Triple Crown winners, but many are reluctant to even concede Trotter of the Year honors to me. It’s not my fault that I have a filly’s name.
A little respect please, Santa.
Marion M (TC)

Dear Santa,
Despite my gaudy numbers, I can’t even get voted Trainer of the Year, forget about being considered for the HOF. I won TOY in 2013, but the following year, when I set an all-breed record of $28.4 million, Takter beat me 84 to 56. And to add insult to injury, I wasn’t even on the ballot last year as Jimmy was a unanimous selection, despite my being the leader in wins and money for a seventh consecutive year. Make it eight in 2016 as I recently surpassed $20 million for the fourth year in a row. Takter, who is also a Libra — thinking sign — is nine years my senior and has 1,100 more wins on his resume, but I have him by $56 million. He deserved that TOY award in 2015, but we’re both down this year — him more than me — so how about tossing a bone my way, Santa. Foiled Again, Sweet Lou, Mission Brief, Buck I St Pat —you get the picture. Do I have to wait until I get 10,000 wins and earn $200 million to sniff the Hall of Fame, Santa?
Look at the numbers,
Ron

Dear Santa,
In 2014, I topped the earnings list by $5.3 million and was the unanimous choice for Driver of the Year. That was a no brainer. Last year, I was the leading money winning driver once again — this time by a more modest $1.3 million. I drove seven of the eight richest sophomore trotters, including Hambletonian winner Pinkman and world champion Mission Brief, and also handled freshman world champion Southwind Frank. However, David Miller, who was 55 wins behind me won the award with 67 votes to my 43 and 22 for dash champ Aaron Merriman. Okay, Dave’s a Hall of Fame driver and he did have a record year and win five Breeders Crown races. So what if I did sport a stellar UDRS of 0.346 to his ordinary 0.276. He hadn’t won since 2003, so no problem. But this year I didn’t even make the ballot?
I’m the only driver with more than $13 million and I’m $509,000 ahead on the money list, but I’m not even a candidate for Driver of the Year? It’s Dave or Scott Zeron. I’m $4.2 million and 123 wins ahead of the latter. Give me a break, Santa. Ronnie and Jimmy together are short $6 million this year. Still, my UDRS is 0.331 to 0.321 for David and 0.256 for Scotty. At least put me on the ballot, Santa.
Searching for Justice,
Yannick

Dear Santa,
Why would there even be a debate about the 2016 Horse of the Year award? I broke Cambest’s 23-year-old all age time trial record in an actual race. They don’t call me One-Forty-Six for nothing. At the same time, I put to rest that ridiculous race record log-jam at :46.4. For that alone, I should get a medal. For drama’s sake, some have tried to make a Miki vs WIJI contest out of it. Dave Briggs crunched a boatload of numbers and decided I finished a nose up on that pest from Hoosier Land. He must have scrambled his figures, Santa. Yeah, Wiggles And Jiggles, or whatever his name is, won the CPD, but I took the BC, Franklin, Haughton and TVG. And I didn’t have any restricted walkovers against four-year-olds on my dance card. And again, 1:46!
It should be unanimous, Santa.
ABM

Dear Santa,
I’ve been associated with this business since childhood, and have owned probably a thousand horses in my lifetime — horses such as Buck I St Pat, Economy Terror and Escape the News. And 2016 has been a career year for me, without any question; on the same day my Control The Moment won the Pace, my Shamballa won the USPC and my Lady Shadow won the Lady Liberty. The latter set a world record for a mile and an eighth in the Golden Girls. My Every Way Out dominated in the NJSS and Candelight Dinner impressed one and all in Ontario. So, I guess all that success put the USHWA in a tough spot: should they nominate me for Owner of the Year or the Good Guy award? Insanity prevailed and I was left off both ballots. I’m shocked!
What’s the problem, Santa?
Howard

Dear Santa,
Betting Line has had a great year. He’s the first son of the great Bettor’s Delight to win the NA Cup and he’s the second (both mine) to win the Jug. At $1.8 million, he retires to stud as the richest sophomore colt by his sire to become available to breeders in North America at that age. So enough with the yogurt jokes. Yeah, he enjoys a cup of Fage strawberry or Chobani Peanut Butter Dream — so what! They can come after me all they want, but leave the colt alone.
Enough is enough, Santa.
Casie

Dear Santa,
A ban on whipping, enacted by the enlightened folks at Harness Racing Australia, will take effect in September of next year. A similar prohibition against beating on racehorses has been on the books in Norway since the early ‘60s. What are WE waiting for? Please take the whips from every driver in North America as you make your rounds on the big night, Santa. I’ll lose my mind if we don’t legislate our own ban before the 2017 season heats up.
Brandon

Dear Santa,
I turn 13 in a couple of weeks, so it stands to reason that I’m not as fast as I was in my prime, but I’m still just as tough as I was back then. With my birthday approaching I’m sure I’ll get the same texts and email I’ve been getting for the past several years begging me to retire — for my own good. Zip it is all I have to say to those people. I made the board in almost half my starts this year, won five of them, and banked more than $126,000 — and I’m in at Yonkers Saturday night. I banked almost $563,000 the last two years, so keep your misplaced concern, all you mindless do-gooders. A lump of coal for anyone who suggests I’m ready to be a full time grass eater, Santa.
Foiled

Dear Santa,
I’d say I’m the best since Speedy Crown, but before I’m through he’ll be out of the conversation. With only four crops on the ground credit me with the fastest trotting filly ever: Mission Brief; Triple Crown winner, Marion Marauder; freshman world record holder, Southwind Frank; Trixton, Bar Hopping and Ariana G. My get generated an otherworldly $150,000 average in Harrisburg. So, tell me why I’m back in godforsaken New Jersey, Santa? Cantab and Patrick are laughing at me from the sire stakes rich Keystone State. Yeah, I breed for the Grand Circuit, but that restricted cash pads the total. This is the equivalent of Lady Gaga or Beyonce living in Toledo. Get me outta here, Santa.
M Hill

Dear Santa,
We finally get a crack at hosting the Breeders Crown in 2017, but that will simply whet our appetite for more. There’s no big track in Pennsylvania, New York or Ohio, and The Meadowlands is a wounded animal without a casino license. Bring us the Hambletonian, Santa. We’re taking over.
Hoosier Park

Dear Santa,
For the second year in a row I’m going to be third on the trainer’s earnings list. Last year, I also had the highest UDRS in the top 50, except for one-horse Clyde and Tracy Brainard. The top two, Burke and Takter, seem to get written about on a daily basis, but when is the last time you read a piece about me? A little recognition for all my success, Santa. Please.
Rene

Dear Santa,
Yeah, I came up a little short in the Hambo, Futurity and BC, but I won the Beal, Dancer and Colonial and banked a million dollars. I didn’t live up to my freshman promise, but still, not a bad year by most standards. Now, bring me some well-bred and straight standing mares so I can let Marion and Hopping know who the post-race boss is.
Frank