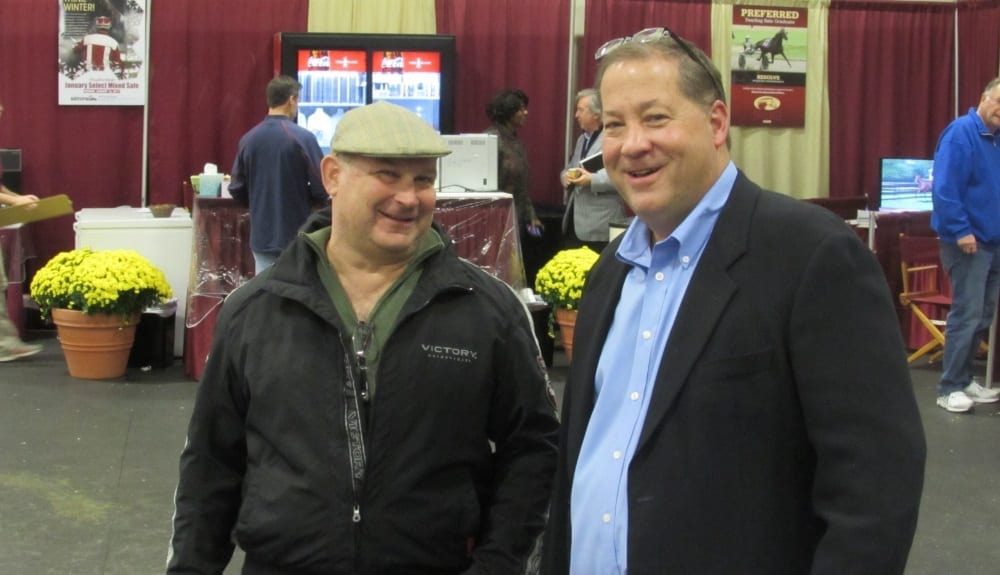 Harrisburg sale concludes with average up 15 per cent, gross up 4.9 per cent

Pete Spears said the results of the five-day Standardbred Horse Sales Company yearling and mixed auction held Nov. 7 through 11 at the Pennsylvania Farm Show Complex in Harrisburg was like “night and day” compared to the 2015 sale when the governor threatened to shut down racing just before the sale. In all, 1,543 horses/stallion shares were sold at this year’s sale, grossing $53,361,502 for an average of $34,583. The average was up 15 per cent and the gross was up 4.9 per cent from the 2015 combined sales figures when 1,691 horses/stallion shares were sold, grossing $50,868,400 and averaging $30,082.

“Last year, of course, because of the political difficulties (in Pennsylvania) we were all feeling a bit discouraged, but we have really bounced back and all segments of the sale were strong,” said Spears, the sale’s president and CEO. “The buyers were very engaged from beginning to end. The crowd was great. Everything seemed to go very smoothly. The consignors seemed happy, the buyers seemed happy. I really couldn’t have asked for any more.

“I’ve only been here since 2004, so I was more of a spectator of the previous sales in the very old days, but I did get a bit of the same feeling this year as I got in 2007 when the slots money first hit in Pennsylvania and we had the really giant sale. Those numbers were inflated for a lot of different reasons with dispersals and large numbers and everything else, but there really was, I think, that sense of excitement and optimism that was somewhat similar.”

Preferred Equine Marketing sold the majority of the horses on the final day — 222 of 381 — as well as the two highest-priced racehorses auctioned to gross $7,837,000 on the day to jump over Hanover Shoe Farms into top spot among consignors for the combined yearling and mixed sales with $13,318,001 in sales for 435 horses sold. Hanover finished with sales of $10,047,500 for 215 horses sold and Northwood Bloodstock was third on the overall consignor list with total sales of $6,164,500.

Preferred sold Crescent Fashion, a Muscle Hill colt out of Fashion Feline, to trainer Ross Croghan of Clarksburg, NJ for $250,000 and Bettor’s Delight—Two Steppin’ Sally mare Bettor Be Steppin to Hanover Shoe Farms for $200,000.
Crescent Fashion is a career winner of $440,196 and competed in the Breeders Crown in his most recent start for trainer Ake Svanstedt.

“Crescent Fashion has some stallion potential at some level in the future. They had done fertility reports and, obviously, he’s a quality racehorse. To top the sale today is great,” Reid said.

“Preferred’s success couldn’t happen without the dedicated staff we have, both in the office and with our sales help and, more importantly, our customers who consign the horses with us and trust Preferred Equine to represent them. We really couldn’t be prouder of the Preferred team. I’m looking forward to getting entries for the upcoming 2017 January sale at the Meadowlands.”

The Ron Burke Racing Stable LLC spent $118,000 on the final day to jump into the top buyer spot for the combined sales. Over five days, Burke spent $1,152,500 to buy 19 horses. Montreal’s Determination Stable was second among buyers with $1,140,000 spent on nine yearlings. Hanover Shoe Farms, the sale’s second leading consignor also spent the third most among all buyers with $925,000 reinvested on eight horses.

Though it only represented a tiny portion of the overall sales figures, Spears said one of the more interesting positive trends was in horses sold to buyers from the United Kingdom or Ireland. In all, buyers from the UK or Ireland spent $664,000 to purchase 24 horses, making it the second strongest region in Europe after buyers from Sweden. Spears said he traces that growth back to British owner Thomas Hill.

“When Mr. Hill started participating, he was very enthusiastic and bought some high-end horses and, of course, has done fabulously well. He started bringing his friends and family and they have been enthusiastic buyers, but what I saw was a lot of young, very animated and enthusiastic buyers from Wales and Lancashire,” Spears said.

Overall, Spears said he was most pleased the sale was up over last year and one of the better sales in recent memory.

“It’s been a very successful sale and I didn’t talk to anybody that wasn’t happy with it. What could be better?”

Northwood’s Bob Boni said there are a lot of positive signs one can take from the Harrisburg sale.

“It tells me that people like to race horses. They enjoy the business.”