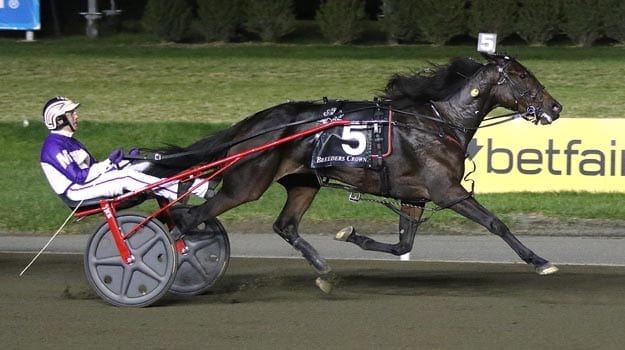 Broadway Donna flashed the form that earned her the Dan Patch Award last season as the Fashion Farms homebred scored a decisive victory in the $500,000 Breeders Crown final for sophomore trotting fillies Saturday, October 29 at the Meadowlands. Driven by David Miller for trainer Jim Campbell, the filly drew away from leader All The Time to capture her fourth straight in a time of 1:53.1. The victory also minted her as the sport’s newest millionaire.

“I feel very blessed and I thank God for (me) being able to be in a position to train a filly like her,” Campbell said from the winner’s circle. “She’s just a super filly.”

This royally-bred filly was the toast of her division as a two-year-old. Sired by Hambletonian champion Donato Hanover, out of the Hambletonian Oaks winner Broadway Schooner, Broadway Donna won nine of 10 seasonal starts for Jules Siegel’s New Hope, PA breeding operation. Victorious in the Kentucky Filly Futurity and Pennsylvania Sire Stakes final, the filly had notched six wins in 11 starts entering Saturday’s contest. Broadway Donna has finished off the board only twice in 2016, racing fourth to All The Time in the Hambletonian Oaks, while a break relegated her to sixth in the Bluegrass at Lexington.

Despite those miscues, Broadway Donna entered the Breeders Crown final riding an impressive streak. She was the fastest of the field of 10, thanks to her speedy 1:51.1 elimination and 1:51.2 Futurity final efforts, showing she could handle heats with ease. In her Crown elimination, Miller kept her covered up before she unleashed a :27.1 last quarter to move from fifth to first in the stretch, winning by half a length for her connections.

“She really has (gotten better through the season). She’s way sharper now than she was halfway through the summer, and that’s always a good thing,” said Miller.

With her hot hand as of late, it was easy to understand why she was sent off as the favorite Saturday from post five. Second choice All The Time and Yannick Gingras drew to her inside in post two, but when the gate folded, it was Emoticon Hanover (Sylvain Fillion) and Fad Finance (Brian Sears) that pushed to the front from posts seven and eight. Leading the field through a :28 first panel, Emoticon Hanover would be shuffled to second by All The Time as Miller sat patiently mid-pack with Broadway Donna. He wouldn’t sit long, though, pulling on the backstretch and sending his filly first-up on the way to a :56.3 half.

“I was hoping to get away somewhere in the middle and come with cover, but, right off the gate, nobody from the inside was even pushing off, so I had to do something,” Miller said of his race strategy. “I got around, and when Yannick (Gingras on All The Time) was moving back, I knew I was going to be first over. She has been sharp, she’s strong. She got the job done.”

Steadily advancing on the outside, Broadway Donna pulled even with All The Time racing out of the turn (1:25.3) and the battle was on between the two fillies. The Fashion Farms homebred was up to the challenge, powering on with a :27.2 last quarter and putting away the field by two lengths at the wire to secure her seventh seasonal score and 16th win in 22 career starts. Emoticon Hanover finished second followed by All The Time and Earn Your Wings.

“When I saw Dave coming first over, I just thought if she’s got her game on tonight, going first over didn’t bother me. She just proved tonight that she’s a top-notch filly,” said Campbell.

The victory was sweet redemption for the filly and her connections on the Breeders Crown stage. As a freshman, Broadway Donna made a break in her elimination and finished a distant seventh, preventing her from advancing to the final. Now, she has a Crown championship to her credit, and as a result, a second Dan Patch Award could be in her future. The victory raised the filly’s seasonal earnings to $664,708, and her career bankroll now stand at $1,195,994.

“[Jules Siegel and I] are both very happy. From Mr. Siegel’s point of view, he bred her, and to have a filly like this and put her over one-million dollars lifetime (is incredible),” Campbell said of his pupil. “When you breed one and race one that does that for you, you’re supposed to be happy. Jules is always extra proud of his homebreds.”