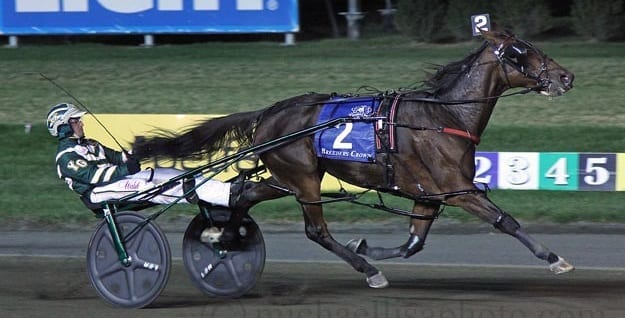 Crowning moment for this Lady

Lady Shadow has controlled the older pacing mare division this season, so it was no surprise to see her turn Friday’s $250,000 Breeders Crown Mare Pace into another personal showcase.

The five-year-old daughter of Shadow Play, out of the Camluck mare Lady Camella, was put to the front by driver Yannick Gingras, who played a game of catch me if you can en route to a 1:49.4 victory in the divisional championship.

“Speed is her game and she gets to use it here on the big track,” said trainer Ron Adams, who became the newest Breeders Crown winning conditioner thanks to a stunning effort by Lady Shadow.

“It’s a really good feeling; it’s a good way to put a stamp on the end of the year. She’s been awesome.”

Lady Shadow began her career as an Ontario Sires Stakes standout for trainer Gregg McNair. The bay mare didn’t venture into Grand Circuit action often during her two and three-year-old campaigns, but Adams and company had their eyes locked on a potential superstar early in 2015.

“We put a group together and bought her at the start of her four-year-old year,” said Adams. “She had a good two and three-year-old year for Gregg McNair and I really liked the mare and I was glad we got the deal put together and got her bought.”

The ownership group that has enjoyed a fantastic ride over the last two seasons with the Ontario Sired mare consists of David Kryway of Ontario, Carl Atley of Ohio and Edwin Gold and Bfj Stable of Pennsylvania.

Lady Shadow was originally purchased for $19,000 at the 2012 Forest City Yearling Sale from the Winbak Farms consignment. After winning 11 of 22 starts and earning over $400,000 for McNair, the Shadow Play mare moved onto her new barn in May of 2015 and has proceeded to score 16 victories as an older competitor, while earning more than $1 million.

The Adams trainee wrapped up her solid four-year-old season with a fourth-place effort in last year’s Breeders Crown Mare Pace at Woodbine. All signs pointed towards Lady Shadow being at the top of the class in 2016, but that didn’t always look promising early on, as she won only once in her first seven starts this season.

However, a slow start to the 2016 campaign was quickly forgotten when Lady Shadow put together a five-race win streak this summer that included the Roses Are Red and a remarkable world record effort in the one-mile and a sixteenth Golden Girls.

“She was razor-sharp going in, but I was still shocked,” said Adams of the Golden Girls, which saw Lady Shadow pace a mile of 1:47 in the extra-distance event. “She was parked and it was big mile.”

Besides a hiccup earlier this month at Red Mile, Lady Shadow has been a force to be reckoned with and finishing second to the top mare was no hard-defeat for those who took home the minor shares.

Ron Burke trainee Sassa Hanover has recently rounded into form after a slow start to her four-year-old season and finished second in Friday’s Breeders Crown event.

“The last couple weeks she (has) started to come back to being the horse we had last year,” said Burke. “It’s been a tough year for her. Things have not worked out for her at all.

“I’ll definitely come back with her next year and race her at (age) five. I have a much better feeling that she’s the horse we thought she was.”

“She got a little bit jammed up in the last turn, but she raced as good as she could,” said Fanning. “I would have rather won, but it just didn’t set up for her to come from off the pace tonight and that’s really what she likes.”

Lady Shadow was parked to the quarter by former stablemate Solar Sister Friday, but after touching down on the front it was lights out. Gingras let the talented five-year-old rip off fractions of :54.2 and 1:21.4 before fighting through a stretch headwind to win by just over two-lengths in sub-1:50 fashion.

It is expected year-end hardware will likely be heading Lady Shadow’s direction on both sides of the border, but she will have one more start to add an exclamation point to her season before a winter break.

“The TVG as long as she’s healthy,” said Adams. “We are going to make sure (she’s healthy) after the race and hopefully TVG in a couple weeks here.”