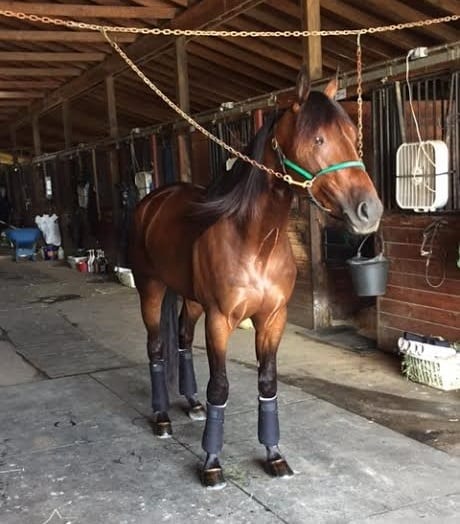 Crown contender has trainer in the upper echelons of the sport not long after going out on his own.

“People can teach you things, but nothing compares to experience. To lead and to make impulse decisions, and to gain the trust of your peers is something you learn by doing and by being the best you can be.” [Andrew Harris]

I usually begin with a quote like that when it’s pertinent to my topic, and also because one small statement, stolen from someone else’s wisdom, can help to prevent a long-winded writer like me from spending too much time arriving at a point. Mostly, I lean on Shakespeare, but this time I chose Andrew Harris because I like his quote.

Okay, that’s nice, but who is Andrew Harris? Let’s just say that the last person to arrive in New Jersey prepared to do battle with horses as well as Andrew Harris was probably General George Washington. No, wait, make that Larry Remmen. No, hold on. Perhaps it would be Bob McIntosh or Jim Campbell…

Forget it. There isn’t enough time to cover them all. Just fill in the name of your favorite Canadian harness racing trainer who brought their A-Game to the USA and enlivened the whole North American harness racing experience for everyone — especially the folks in the grandstand.

You might not be very familiar with Harris’ name now, but there’s a good chance he’ll be on your short list of go-to guys within a few years. In fact, he might even get on it in a few days if Waitlifter K, a homebred colt he trains for Robert J. Key, takes home the Breeders Crown trophy for three-year-old trotting colts and geldings Saturday night (Oct. 29) at the Meadowlands.

The son of Muscles Yankee—Treasure Forever has drawn the rail in the $500,000 final after a gritty season that found him raking in $178,588 while butting heads with the best of the best — which includes finishing a strong second to the brilliant Bar Hopping in last week’s Breeders Crown elimination, and a respectable fourth in the Hambletonian to the Trotting Triple Crown champion Marion Marauder earlier this year.

“He’s a big, great looking, monster-strided horse, who loves to talk to you,” said Harris. “He’s very vocal and very people-oriented. He would spend all day with you if he had it his way. He loves attention. On the track he’s a well-mannered horse, but behind the gate he could get excited and get a little pacey, although lately, Matt (Kakaley) seems to have figured that part out. I’m blessed to have Matt driving this horse. He’s not a horse you would want to play driver roulette with.

“He was already a very talented horse before I ever got him. I think highly of Chuck Sylvester because he did a phenomenal job developing this horse. But, he’s still got some quirks to him. Going out to jog, he stands trackside and watches the other horses for five or 10 minutes before he decides if he’s ready to work. Usually he waits to see a horse that gets his interest and then he will follow after it.”

In spite of the fact that he’s only won one race in 2016, Waitlifter K is usually a contender who shows up somewhere near the winner in a photo-finish freeze frame. In other words, he’s been punching on the door but he hasn’t been breaking it down all the way. And, while Waitlifter K stands by the training track waiting for a challenge, his owner and trainer are patiently waiting for him to kick that door down.

Now that we’ve got the general idea about what Waitlifter K’s got going on, lets get back to his young trainer.

Andrew Harris is a 32-year-old native of Hamilton, ON and he’s been sitting in the jog cart since he was only eight. His twin brother, J. Bradley Harris, works in harness racing as well, and his dad, Jack Harris, is a well-known and accomplished horseman in Canada.

“I didn’t have big aspirations,” said Andrew from his home in southern New Jersey where he has settled with his wife Amanda and their two children Gracie Lynn, 5, and Kinsley, 3.

“Some people will say they always knew what they wanted to do with their lives, but for me, I think I was young and just a little lost and I definitely needed direction. My brother got his license to drive horses when he was 17. I didn’t try to get mine until a year later. I still don’t know why I was a year later than my brother. I guess I just wasn’t really motivated for some reason. I only knew that I loved the horses.

“My dad had a big stable when I was growing up. He was a leading trainer at Flamboro Downs, and that’s where I first started to understand racing, and feel it and live it and to appreciate the tough war horses like those old claimers my dad started us on when we were young. We were tiny little fellows, about eight or nine years old training in sets of three. I call that time of my life, ‘the good old days,’ because I had no real responsibilities.”

The nuts and bolts of Harris’ harness racing bio is that he learned the business from his talented dad, and when it was time to move on, he went to work for Casie Coleman’s Canadian operation. Eventually Harris became Coleman’s right hand man in a big barn with big horses and big owners and big responsibilities. Then, when Coleman decided to send a bunch of her stock to New Jersey, Harris was the trainer she sent along with them.

“I ended up coming to the states to run Casie’s Jersey barn, and I came down open minded and without any big plans for my own career,” he said.

“I was grateful for the opportunity because I learned so much. It gave me confidence. I learned how to work with owners and I helped make business decisions. Sometimes I had to break bad news and I had to handle all the things that come with the upsides and downsides in racing. I learned all about the people skills you need to have in a business environment like that. Being allowed to run a barn of top-flight horses at a young age is something that prepared me for just about everything. I’ll always be thankful to Casie and to her partners for giving me that opportunity.”

Things changed for Harris about five years ago, when Casie Coleman decided to open a Florida winter operation and concentrate on developing juvenile stock. Soon thereafter, the supply of racing stock being sent down to Harris in New Jersey started to dwindle. Realizing that he had to make a living, and that working five horses for another trainer was not going to cut it, Harris started to entertain the idea of striking out on his own.

“I was like, well it’s been a good run but Casie’s path and mine weren’t going in the same direction,” Harris said.

“So I bought a horse out of a sale and then I bought another, and then slowly, I built up enough of my own stock to train on the side while still handling a few for Casie. She was glad she didn’t have to worry about taking care of me. Then, during the following summer when her stakes horses came back, I still handled her horses and mine. The following winter I added more owners and more horses, and it got to the point I knew I couldn’t do both jobs. It wouldn’t have been fair to Casie, or my newly acquired partners.”

It’s safe to assume that this is the point in time when Harris officially struck out on his own. Who could ask for a smoother transition than that? Today, Coleman and Harris have a great personal relationship based on true friendship and mutual respect.

Currently, Harris trains some 35 head, including Waitlifter K, at White Birch Farms in Allentown, NJ. His favorite hobby is getting to the movies, but he admits that he rarely finds time for that.

“My free time is mostly devoted to my two children,” he said. “My biggest drive is family. I want to make my mom and dad and brother proud of me. They’ve taught me so much, and I like to think that for every little success I reach, they can take solace in knowing they did right by me. My wife and my kids are everything to me. I want my family to grow in the best environment I can provide. They are the gas to my engine.”