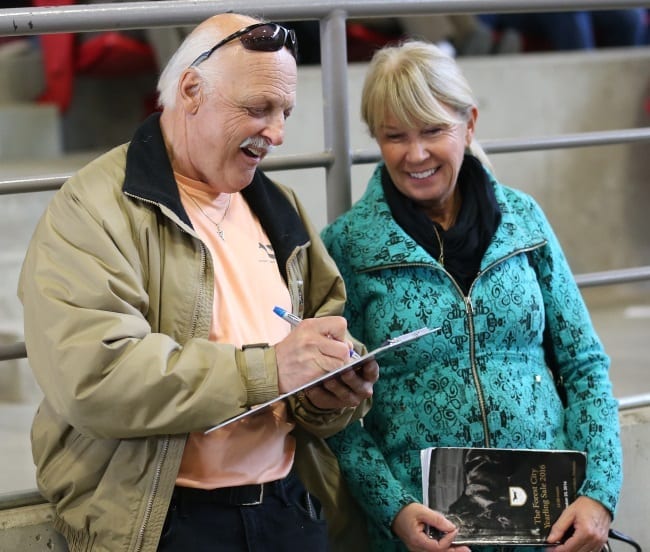 Dr. Ian Moore topped the sale with a $110,000 purchase of a Shadow Play full-sister to Arthur Blue Chip and then turned around seven horses later and bought a Shadow Play colt for $100,000. The sale posted its highest average in at least 16 years and its highest gross since 2011.

“I’m blown away. I knew we would be good, but I didn’t know we would be this good,” said sale manager Ann Straatman.

No wonder Dr. Ian Moore headed for the exits shortly after buying what turned out to be the two highest-priced yearlings sold.

“I got the hell out of there so I didn’t buy any more,” Moore said, laughing.

The trainer topped the sale with a bid of $110,000 for Percy Bluechip (hip 48), a Shadow Play filly out of the Artsplace mare Advantest. Moore not only trained Shadow Play, he also conditioned Percy Bluechip’s full-brother Arthur Blue Chip ($552,759 – 1:50.1). Percy Bluechip, who was bred by Blue Chip Farms of New York and consigned by Preferred Equine Canada, is also a half-sibling to the Bettors Delight son Kenneth J ($1,592,755 – 1:49.3).

Moore said he wasn’t surprised Percy Bluechip fetched six figures, but he didn’t expect to go to $100,000 seven horses later to land Atomic Seelster, a son of Shadow Play out of the Astreos mare Angelina Seelster that is a half-brother to Mach Three mare Aniston Seelster ($193,683 – 1:52.4). Atomic Seelster was bred and consigned by Seelster Farms of Lucan, ON.

“We had Arthur (Blue Chip) and he was the only horse we ever paid over $100,000 for and we paid $135,000 for him. I figured she might go for $100,000 and this morning we decided, ‘Let’s go to $110,000,’” Moore said. “I was expecting that for her, but I didn’t really expect that for the colt. I expected $60,000, $70,000, but he was a good-looking individual, a really good-looking individual… Obviously, if they looked good and had any kind of a pedigree people were willing to pay for them today. I had been hearing a lot of people didn’t want to spend the extra 30 per cent (for the currency difference) in Harrisburg. So, no matter what, it’s still going to be cheaper up here and these are the ones that you’re going to be racing against next year, the ones that are in this sale and the Canadian Yearling Sale.”

Straatman, whose family’s Seelster Farms led all consignors in both gross ($1,426,000) and average ($35,650 for 40 yearlings sold), said she’s thrilled for the farm, but even more pleased with “how the trend has turned” for the sale, which slumped dramatically in the years directly following the announcement of the end of the lucrative Slots at Racetracks Program (SARP).

“It certainly tells you there is optimism in the industry,” Straatman said. “There is a shortage of horses, of course. Supply and demand, I think, played a big part in today’s success, but I’m encouraged with the prices that people are investing into their future in the industry.

“We may be turning a corner with the breeders rewards that are available now and with the incentives from the SBOA, the four-tier incentives for participation in Ontario. I think it’s a huge incentive for breeders to improve their broodmare bands and continue to do so and breed quality over quantity. The buyers have spoken and shown what they want to purchase. Now we just need to follow suit.”

The Forest City Yearling Sale also out-paced September’s Canadian Yearling Sale that produced a gross of $2,972,200 for 144 yearlings sold and an average of $20,640. The FCYS average was 28 per cent higher.

Though Moore spent $210,000, total, on two yearlings, Tan Micallef, an agent from Moffat, ON was the leading buyer at the Forest City Sale, spending $236,000 on five yearlings. Trainer Tony O’Sullivan spent the third most when he paid $121,000, total, to take home five yearlings.

Mach Three was the leading sire by average (for three or more yearlings sold). His 14 offspring averaged $40,286, followed by Shadow Play with an average of $33,786 for 28 sold.

Eight yearlings from the last crop from the late Hall of Fame stallion Camluck — who stood his entire career at Seelster’ Farms — averaged $31,375.

“That’s wonderful,” Straatman said. “It goes to show that even after his passing, (the buyers) still have confidence in him. He’s proven, absolutely proven.”

Meanwhile, long before the last gavel blow was struck Sunday, Moore was already preparing two sets of harness to begin the breaking process Monday morning with his two new purchases.

“I’m looking at them in the stalls,” he said over the phone. “I’m glad they’re here, for sure. They will be heading to Florida in a couple of weeks. I hope they stay healthy.”